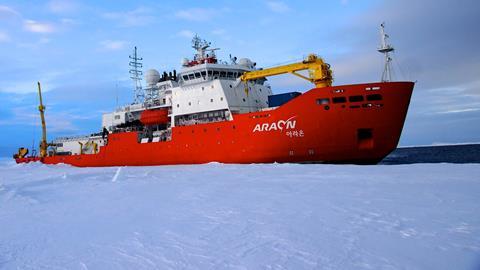 The Amundsen Sea is remote, even for Antarctica. In 1774 it defeated James Cook, forcing him to turn back as he was faced with thick, multi-year sea ice. Scientific exploration only started in 1994, with a cruise that discovered the bordering parts of the Antarctic ice sheet showed the fastest thinning rates on the continent.

Today, research ships go to the area every few years to investigate the ocean’s role in the retreat of the ice sheet. Between December 2017 and February 2018, I joined the South Korean research icebreaker Araon to recover and re-deploy an array of hydrographic moorings owned by the University of Gothenburg in Sweden and University of Bergen in Norway.

On a sunny afternoon in Sweden we close the container with the equipment for the cruise, secured with a spider’s web of ratchet straps. This will be waiting for us on the quayside in Lyttelton, New Zealand. I have been buying equipment since June, and have inadvertently become an expert in where to acquire a kilometre of rope, shackles, chain and, of course, oceanographic instruments and buoyancy devices. Contingency plans have been made for things that aren’t going to make it in time, and for items like lithium batteries that are difficult to ship.

We are on our way to the Amundsen Sea. Johan, the technician helping me on the cruise, and I made it to the Araon with most of our equipment on time. The only pieces missing were the railway wheels that would act as anchors for our moorings. Not wanting to ship 3.5 tonnes of steel from Sweden, we had bought them from the National Institute for Water and Atmospheric Research (NIWA) in Wellington. 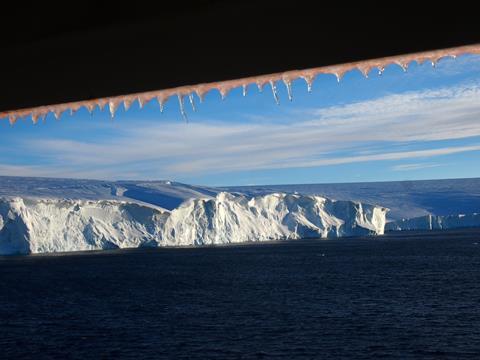 Unfortunately, the freight company had forgotten them in their yard.

A series of phone calls from both NIWA and me conveying an increasing sense of urgency finally bore fruit: the railway wheels arrived at the quayside with a slightly bemused truck driver an hour before the ship was scheduled to leave. The mooring lines were cast off as the last of our equipment touched the deck.

That was a little close for comfort!

We are on our way to the Amundsen Sea… again. A day from the sea ice, we turned back for New Zealand because of a medical emergency. At that point, we were more than 2500 miles from port, seven days from landfall in either New Zealand or Argentina. It was truly the middle of nowhere.

All preparations stopped. We settled into filling our days with other work, going to the gym and watching films as we made our way back towards civilisation. After a few days the condition of the sick crewmember stabilised, but it was still a relief to see him safely delivered into an ambulance in Lyttelton. The rest of us spent a rainy, enjoyable day recharging for the second part of the cruise.

We have lost 14 days. The sea ice clogging the eastern Amundsen Sea helps to reduce the schedule, but there is still pressure to get as much research done as possible. The main part of our mooring work has now moved from the latter part of the cruise to the start; I am now busy rewriting the mooring plans for the third time.

Why go to the Antarctic?

The West Antarctic Ice Sheet has been retreating at an increasing rate over recent decades. It is particularly sensitive to collapse as its base is grounded below sea level, making it potentially unstable. In Antarctica, around half the ice sheet is melted by the ocean at the base of floating ice shelves and the other half calves (breaks free) as icebergs. We need to understand what controls the transport of ocean heat to the ice base to project what the future contribution of Antarctica to global sea levels might be.

The warm water that is the source of the oceanic heat ultimately comes from the North Atlantic, and is pulled towards the surface by winds in the vast expanse of the Southern Ocean. It enters the Amundsen Sea continental shelf as a warm (up to 1.5°C) and salty bottom layer a few hundred meters thick that flows along glacial troughs towards the ice shelf cavities. Here, it melts up to 25–30 metres per year off the ice base. Our research focuses on the processes controlling the thickness and temperature of this warm layer and the dynamics that allow it to cross the shelf break and ice shelf edge, as well as monitoring its evolution.

Access to the region with research icebreakers happens mainly in summer (December–February). Hydrographic moorings are deployed for a few years in locations that have been identified from ship-based surveys to obtain data during the winter. On these moorings, sensors that measure temperature, salinity, oxygen and current velocities are suspended in a column between a buoy at the top and an anchor at the bottom. They are retrieved by triggering an acoustic release unit to drop the anchor weight, at which point they float to the surface and the data can be downloaded.

After four weeks of relative calm, a lot has happened in the past 34 hours. In 2016, we had deployed an array of four moorings at the western Getz ice shelf to investigate the in- and outflow into the cavity and it was time to retrieve them. Concentrating moorings in a small area makes for a great dataset, but means that deployment and recovery are intense. We braced ourselves and crossed our fingers that everything would come back. 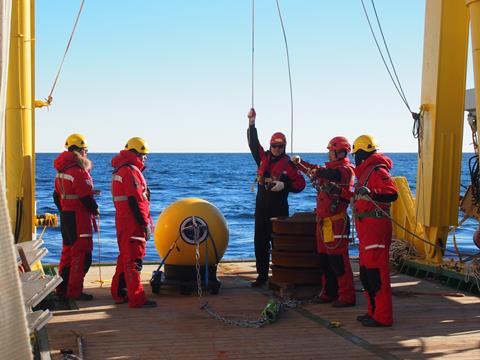 There were a few small hitches. One of the moorings did not tell us it had released, but popped up to the surface nonetheless. The top sensor on a mooring that had been placed perilously close to the ice shelf edge had been moved down the rope by a calving iceberg. But overall the recoveries went incredibly smoothly.

We downloaded the data and serviced the instruments that were to go back in the water for the next two years. Ship time is expensive, so we worked as quickly as possible, grateful for the help from two of our shipmates. Then we triple-checked the equipment’s shackles and pins, ensured the instruments and acoustic release mechanism were switched on. For once the bathymetric map was almost correct, and the moorings were deployed at the sites that we had picked out beforehand.

Luckily, there were other stations between us and the last recovery and deployment, so we got a few hours of sleep. Johan and I are cross-eyed with fatigue.

Some birthdays are better than others. I celebrated mine by using the Araon’s two helicopters to complete geophysical surveys and deploy autonomous ice radars on the Getz ice shelf to measure the basal melt rate.

The weather was playing ball, but we were delayed because of a difficult mooring recovery during the night. After a few more welcome hours in bed, we convened in the mess to have a late breakfast and birthday cake. The helicopter pilots moved from their default position of watching movies and reading books and were as excited as the rest of us

Eventually we loaded our equipment into one of our helicopters, hopped in and away we went, over the cliff of the ice shelf edge onto the great, white, flat expanse of the ice shelf.

Antarctica was just as impressive as my first visit two years ago. Setting up the first site took some time, while the helicopter shuttled out more equipment and fuel drums for the other helicopter to refuel while flying its surveys. Work was much faster at the second site, partly because we now had the pilot to help and partly because we had ironed out the kinks. After a photo session we took the scenic route back to the ship.

Today things have started to go wrong. Helicopter operations have been brought to a halt by a hydraulics leak after an unsuccessful attempt to service an automated weather station. This means we cannot deploy the remaining new ice radars nor recover any of those we placed two years ago. The pilots went back to watching movies as the ship turned north towards the shelf break, where we planned to service a mooring that would give us the last two years of data in an eight-year time series. 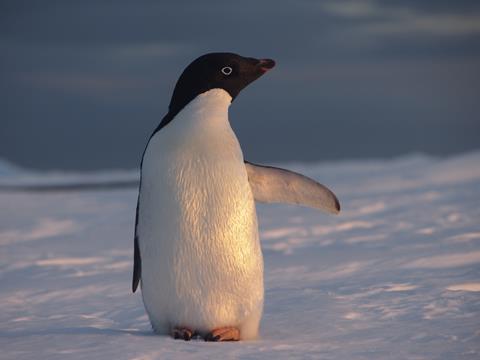 But there was no reply as we tried to wake up the acoustic release. A search in the immediate area brought no reply either, and there was nothing visible on the sonar in the deployment location. After eight hours of searching we gave up and moved on.

Generously, chief scientist decided to return to the site to carry on the time series with a gap. So I re-designed the mooring without the top float that should have been retrieved with the old one. The actual site was still full of sea ice and icebergs, but the captain found a hole about a kilometre away and we deployed it there instead. We were watched by a small audience of emperor penguins.

After the barbecue and cruise photo on Araon’s bridge deck, we have turned north for home. It was a party with a view: we had just deployed two small bottom temperature sensors at the very edge of the ice shelf. 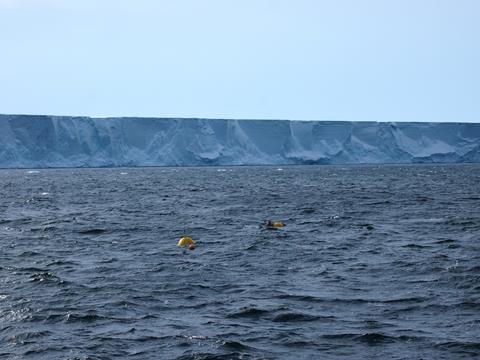 In the days after the last mooring deployment, we steamed back towards the western end of the Getz Ice Shelf and successfully retrieved the last Bergen mooring. We also stopped on an ice floe, where some science was done and many penguin pictures were taken.

We have now passed Mount Siple, a 3110 metre high volcano, and are winding our way through the sea ice belt into the open waters of the Southern Ocean. Time to start looking at the data we have recovered and packing the equipment.

We arrived in Lyttelton two days ago, spending a sweaty morning carrying our equipment out onto deck before we enjoyed what felt like the best lunch of the year in a local cafe. Yesterday, all our equipment was loaded into lorries for shipping back to Norway and Sweden. It will get there in about two months – and I have a week to enjoy the New Zealand summer. Then it will be back to ice and snow… although this time I’ll be home.