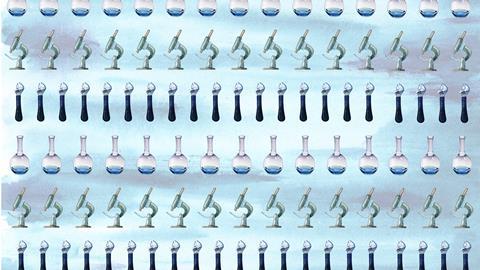 Are chemical engineering and biochemistry their own disciplines?

Exploring the edges of the chemical science family

Chemistry provides the foundations for both chemical engineering and biochemistry. Once perhaps sister-disciplines, these academic communities now often seem more like distant cousins. Over time they have developed closer ties to the engineering and biosciences communities respectively, creating very separate academic cultures. So what does chemistry share with these disciplines today, and how do they view their chemistry colleagues? With an increasing emphasis on multidisciplinary research and innovation, is it time for a family reunion?

Chemical engineering emerged towards the end of the 19th century in an attempt to make industrial chemistry safer and more efficient. In 1887, chemicals plant inspector George Davis taught the first chemical engineering course in Manchester and the new discipline took its name from his 1901 Handbook of Chemical Engineering.

Their different approaches sets the two disciplines apart. ‘It’s quite difficult to get chemical engineers to think at the molecular level,’ says Styring. ‘Conversely, it’s very difficult to get organic chemists in particular to think at the bulk level.’ These barriers also extend to the language and terminology each discipline uses. ‘When I first started in chemical engineering, the first thing that someone did was give me a dictionary to convert chemical language into engineering language,’ remembers Styring. The term mixing, for example, will have very different meanings – a chemist may think simply of mixing two solutions, but a chemical engineer will immediately think about mass transfer properties.’

In 2003, the Engineering and Physicals Sciences Research Council and Royal Society Chemistry’s International Review of Chemistry pointed out the lack of contact between UK chemists and chemical engineers. But some think the differences between the fields are starting to narrow.

‘Over the past decade or so there has been a rapid convergence in the way that chemists and chemical engineers approach things,’ says Maitland. ‘Chemical engineers are applying their principle of optimisation right the way down to the molecular level – optimising the design of molecules … [whereas chemists] have got increasingly interested in applications and how you would go from small scale production of molecules to production at large scales.’

Nottingham materials chemist Derek Irvine thinks that the relationship between chemistry and chemical engineering in the UK still lags other parts of the world. ‘If I look at the graduates that come out of German, American and French universities they have had far more basic science in their degrees and that often makes them more capable of working [with chemists] at the interface.’

Nottingham is one institution that has bucked this trend. Irvine joined the university from industry as part of an initiative to improve links between chemistry and engineering, and there is now an ingrained ethos of collaboration between the departments. ‘My group work in both chemistry and engineering spaces,’ he says. ‘We have really developed the “joint lab use” concept, which is a much bigger space than a single laboratory – rather it is the free movement of researchers between the laboratories that they need to deliver their projects.’ His chemical engineering colleague Victor Sans Sangorrin agrees that this continually adds value to their research: ‘You can see more of the opportunities that arise from applying knowledge existing in one field to the other.’ 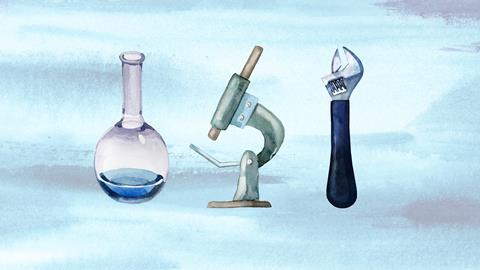 At the same time as the arrival of chemical engineering, universities were also developing a chemical understanding of biology. The term ‘biochemistry’ was coined in 1903 by German chemist Carl Neuber, but the subject was actually born within German medical schools. University College, London was the first UK university to teach ‘chemical physiology’ in 1884, with Liverpool establishing the first school of biochemistry in 1910. The field’s early history involved a fight for independence from its physiology department roots, but with additional input from industrial areas such as fermentation and agricultural science, biochemistry eventually broke free.

The relationships between disciplines are still shifting says Paul Denny, group coordinator for Durham University’s bimolecular interactions group. While part of biosciences, half of Denny’s group are housed within the chemistry department. The initiative is still an unusual one, but Denny says for those involved the demarcation between fields blurs over time. ‘You end up between departments which has its challenges, but we are quite a tight unit and we engage with both [disciplines],’ he explains. ‘Biochemistry has moved several steps away from chemistry. It’s become a bioscience discipline in the main. Not exclusively, but it’s become much more embedded in that.’

In fact, expansion in the biosciences has put the discipline of biochemistry itself under some strain. A victim of its own success, the discipline has become highly integrated into other biosciences and some have even argued there is no further need for dedicated biochemistry departments. ‘You find you take your biochemical knowledge, training and interests and you apply it in a discipline which is not fundamentally biochemistry any more,’ Denny explains.

Elliott Stollar, programme director for the University of Liverpool’s biochemistry degree, agrees that UK biochemistry is firmly in the biosciences camp and says with the massive expansion in biological knowledge, teaching from a chemical perspective has become less feasible. ‘If you try and do that now with biochemistry, it’s almost impossible because there are so many things [to learn] – you would be there all day teaching reaction mechanisms and there are so many other things apart from how the reaction occurs that are important.’ But he is keen to increase the amount of chemistry his students learn.

As with chemical engineering, biochemistry has a different status in the US and a much closer relationship to chemistry – sometimes it’s even part of the chemistry department. This is most common in smaller US teaching colleges, but the American Chemical Society also still classes biochemistry as one of six chemistry sub-disciplines (with analytical, inorganic, organic and physical and polymer chemistry). Stollar says this hadn’t occurred to him until he started working in North America as a postdoc and then lecturer. Given, the huge expansion and advances in biological research, he says this did cause some tension between the disciplines.

Chemistry from the other side

So what do chemists and their academic cousins really think about each other? ‘Chemists may perceive chemical engineers as the next stage – once the chemists have done their job,’ says Maitland. ‘To some extent that’s true, but I think chemical engineers have got a lot to offer in terms of bringing their optimisation systems approaches right down to the molecular level.’

For biochemist Denny, chemistry has a stronger sense of community compared with the biosciences. ‘Chemistry seems to have maintained an identity and structure – it goes all the way from [degree] programmes structured and accredited by the RSC, through to the way research groups are set up.’ Denny has also noticed chemists are good at rewarding each other compared with allied subjects. ‘I wouldn’t say prizes are unimportant, but there are less prizes for most of us in biosciences to go for.’ While he believes these types of esteem measures wouldn’t factor in a biochemistry job applications, they seem to matter in chemistry: ‘I find it quite quaint!’

There is also a sense among biochemists that their subject is more relevant to todays scientific priorities, whilst chemists may consider their discipline more intellectually challenging. Denny suspects some chemists see all of bioscience as ‘non-reproducible nonsense’ – though, he jokes, it often isn’t reproducible!

Yet despite these differences, for those who do engage across the disciplinary boundaries, it is clearly a valuable process. And, as long as people respect their colleagues in other disciplines and the science gets results, perhaps it doesn’t matter where chemistry ends and another subject begins. ‘I think you have just got to be open minded about it,’ Stollar concludes. ‘Let your research and teaching decisions be guided by where the next discoveries need to be made – not on the biases and prejudices of your “scientific upbringing”.’