Building a city of knowledge

Many were surprised when Fernando Albericio announced he was leaving his role at one of Spain’s main research centres – the Institute for Research in Biomedicine – to move to Ecuador. In April this year, he became rector of Yachay University in Ecuador’s ‘city of knowledge’, currently being built from scratch. 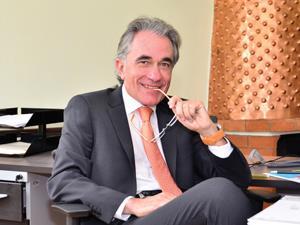 Yachay (‘knowledge’, in the local kichwa language) is an almost 10,000 acre site where Ecuador’s government is building a futuristic settlement devoted to science, with a promised investment of $1 billion (£626 million). The idea is the brainchild of President Rafael Correa and is possibly his most ambitious, and controversial, project.

But for Albericio, the decision is not ‘an adventure’. ‘I accepted the proposal because it combines two of my passions: research and Ibero-America [Latin America, Spain and Portugal],’ he explains. ‘It’s an opportunity to create a university based on research that does not produce only papers, but has an impact on society.’

Albericio’s move reflects a long-held belief in translating science into applications. After obtaining a degree and PhD from the University of Barcelona, he became a professor there in 1985, after three years of postdoctoral experience abroad.

But in 1992, he moved to Boston, US, to direct peptide research at Millipore – a decision that changed his approach to science. ‘It was an eye-opening experience: I realised that research has to be directed by something else than curiosity. It must give answers to society’s questions through knowledge, and the main way to do it is companies,’ he says.

Research must give answers to society’s questions

In 1995, he returned to Spain for a professorship at the University of Barcelona. But his priorities had changed. In the next two decades, he helped found Barcelona’s Science Park, of which he was executive director from 2005 to 2012, founded five biomedical start-ups, filed 52 patents and became consultant to several chemical and pharmaceutical companies. His work has focused on peptide synthesis, but he also patented an anti-cancer compound (kahalalide) and is currently working on a new antibiotic against tuberculosis and on green solvents.

Around 2005, Albericio began the journey that led to his latest career change. ‘I started travelling a lot to Latin America, and I realised that scientists there were trying to copy the US [to achieve excellence]. But this does not make sense: we need to build institutions that give answers to the questions that come from our own territory,’ he says.

In early 2014, he was contacted by a headhunter with the proposal of becoming rector of Yachay University. ‘In February and March I spoke a lot with Correa: he is directly involved in the project, and has an excellent academic background,’ says Albericio (Correa has a PhD in economics from the University of Illinois at Urbana–Champaign, US). ‘Europe has a lot of talent but decreasing investment. Ecuador starts from behind, but it is multiplying its investment five- or sevenfold every year: this may be the first time in my life that I am not asking for more money from a politician.’

Correa hopes that the investment will transform Ecuador’s raw materials and agriculture economy into one based on technology and research. So while the site will host oil and mining research, biodiversity and nanotechnology are also pillars of the university’s strategy. Next year, 13 existing Ecuadorian research institutes will also relocate to the site.

The first student cohort (about 200 of the country’s highest-performing students) joined the university in April 2014. And in 2015 Albericio will make an international call to hire 500–600 researchers as well as headhunting for the higher ranks of the university.

However, the project also has its share of critics. ‘The rector has a lot of goodwill, but is very naïve,’ says Jesús Sebastián, a researcher in science policy at the Spanish Council for Scientific Research in Madrid, who travelled to Ecuador last year as a consultant to the country’s government.  ‘There is money and political will, but there are also enormous uncertainties,’ he argues.

‘The level of science is very low in Ecuador; there are islands of quality in some universities, but instead of taking advantage of them, Yachay starts from zero,’ he points out. Two years ago, Correa closed 14 universities for lack of academic quality (a positive action, according to both Albericio and Sebastián) and created four anew, Yachay among them. ‘It is the pyramid Correa wants to leave in Ecuador, but if he loses power, it’s likely to fall down,’ Sebastián warns.

Albericio disagrees. ‘Sometimes it is better to start from scratch than to reform existing institutions,’ he says. ‘In other places, people just talk about promoting science, but Correa is actually doing it. You can see it on the streets: I have appeared on the cover of the main magazine in the country, and now people recognise me and show me their support.’