A unique MSc course focuses on the cross-disciplinary know-how needed for a career in anti-cancer drug development. Joe McEntee reports

A unique MSc course focuses on the cross-disciplinary know-how needed for a career in anti-cancer drug development. Joe McEntee reports

When it comes to cancer, the numbers speak for themselves. One in three people will develop the disease within their lifetime, and one in four will die from it. By 2020, according to the American Cancer Society, 10 million people will die each year from cancer. 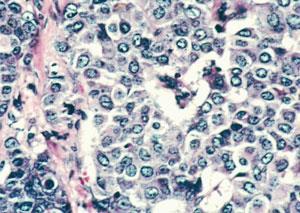 Lined up in the battle against the disease, however, is a truly multidisciplinary and international research effort. It’s one in which scientists from academia, industry and clinical practice are converging towards common goals: better detection, prevention and treatment of cancer. Increased public and private investment in cancer research worldwide means that, at the laboratory sharp end, it’s a discipline that represents a fluid and dynamic career path for front-line scientists - chemists in particular.

Within this growing area of research, the University of Leicester, UK, launched a ’first of its kind’ one-year taught Master’s degree in cancer chemistry, in September of this year. The course, which was developed by Paul Jenkins, an expert in chemotherapeutic drugs in the university’s chemistry department, covers the latest approaches to cancer diagnosis and treatment.

The University of Leicester is part of a UK network of Experimental Cancer Medicine Centres announced earlier this year and funded to the tune of ?35 million by Cancer Research UK and the Departments of Health in England, Scotland, Northern Ireland and Wales. An international review panel awarded grants to 17 centres based on their scientific and clinical excellence.

In the lab, out of the lab

This MSc is just one sign that the barriers between distinct yet interconnected disciplines are being dismantled by the day - with chemists, cell biologists, imaging scientists, clinical oncologists and the like increasingly required to get to grips with each other’s respective rules of engagement. Equally significant is a top-down emphasis on translational research, which is all about getting scientific breakthroughs and technology innovation out of the laboratory and into a clinical trial setting as efficiently as possible.

The course puts specific emphasis on the design and synthesis of small-molecule anti-cancer drugs which intervene in cell signalling pathways that control the cell cycle. Increasingly, cancer chemists are focusing their attention on such individual macromolecules and small molecules, and their functions, in a cellular context. It is this work that will ultimately shape the technologies needed to better understand the biochemical alterations associated with cancer, and to explain and adjust the signalling pathways in cancer cells.

A case in point is apoptosis, a form of programmed cell death which, in normal circumstances, mediates the safe removal of cellular debris in multicell organisms. If apoptosis breaks down, however, it can result in the uncontrolled cell proliferation associated with cancer.

Other scientists are seeking to unravel the signalling chemistry associated with angiogenesis, a key step in tumour development involving the growth of new tumour-supplying blood vessels from existing vasculature.

According to Jenkins, the MSc course is motivated by fundamental advances in our understanding of the biochemistry and genetics of cancer over the past 30 years. ’At a funding level,’ he says, ’there’s real interest in training up chemists who understand the biology of cancer - researchers capable of intervening in the signalling pathways of cancer cells. The MSc is designed to meet that need.’

He adds: ’I’m on the RSC’s Biomedical Sciences Committee, and it’s evident that industry and the clinical community are already aware of the course and are watching with interest.’

The right MSc for you?

The MSc course content is tailored for graduates in chemistry, biochemistry or cell biology who are seeking to pursue a career in cancer research, whether in the pharmaceutical industry, clinical practice or academia. The priority, says Jenkins, is ’to explain the biological pathways involved in cancer and how to design non-toxic small molecules to intervene specifically in these pathways to produce the next generation of cancer drugs’.

Five students have enrolled for the 2007-08 academic year, three of them securing bursaries from the charity Cancer Research UK. Next year, however, Leicester hopes to double the student roll.

At the end of the course, it is intended that students will be equipped with a working knowledge of the chemistry that underpins cancer causation; the chemistry of cancer prevention and DNA repair; the molecular and genetic basis of cancer; the cell biology of cancer cells; and the application of novel agents for the diagnosis and treatment of cancer.

So far, the signs are encouraging. ’This year’s students have really enjoyed learning about the biology and chemistry of cancer,’ notes Jenkins. Even better, it appears that the students are already embracing the cross-disciplinary mantra at the heart of modern cancer research. ’The chemists are helping the biologists on the chemistry and vice versa,’ he says.

For further information on the University of Leicester’s MSc in cancer chemistry website.