Diary of a PhD student

Lucy Kissick was wrapping up her first year of a PhD studying the surface of Mars when her sister asked her a few questions. ‘She was considering doing a PhD in chemistry, and she asked me all the questions I had had [when I started],’ Kissick recalls. ‘How do you contact professors? Do you need to come up with your own project? What is imposter syndrome? How do you write papers? There was no real go-to guide… so I thought I could do it myself.’ Kissick decided to set up the PhDiaries: a video chronicle of the ups and downs of doctoral life.

Kissick had no prior experience in media – she was even new to her subject. Originally studying geomorphology at Durham University, UK, Kissick developed a passion for other planets – but found the papers a struggle. ‘About half the papers mentioned minerals and compounds I didn’t understand,’ she admits. ‘I didn’t do chemistry at A-level, I gave it up at GCSE … but I realised to understand the surface of Mars, I would need the chemistry.’ Now a student in Nick Tosca’s group at the University of Oxford, UK, Kissick is disarmingly honest about PhD life’s rhythms – from moments of self-doubt and rejection to personal victories, such as the first time she referred to herself unironically as a chemist. ‘I think it’s important to talk about [personal issues],’ she explains. ‘A PhD takes up your whole life, it’s hard to separate academic and personal matters. I’m not interested in oversharing, but it’s important to add a personal touch so people can say if they feel the same.’ 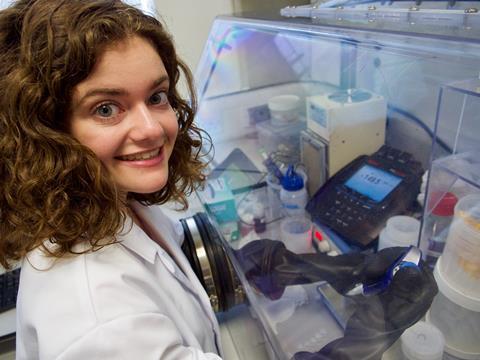 The results are videos that tackle issues ranging from mental health and PhD life stories with ‘how to’ guides and science communication. Currently, she explains, her work involves simulating the surface of Mars in the lab to work out how ancient lakes produced greenhouse gases, potentially affecting the planet’s climate. ‘I synthesise my own piece of olivine in beakers as a proxy for the Martian surface,’ she outlines. ‘I add acid to the beakers, and cover them with tin foil as it’s a process that could be affected by photo-oxidation and I’m simulating the bottom of the lake. The acid is the lake water. By varying the pH itself, I can see how changes occurred over time.’

A PhD takes up your whole life, it’s hard to separate academic and personal matters

In addition to her video blogs, Kissick has also branched out into other ways to share her enthusiasm for the red planet, including writing blogs for her college, St Edmund Hall, taking Martian meteorites into schools thanks to a grant from the British Society of Geomorphology, and even organising a debate on Mars with Ellen Stofan, Nasa’s former chief scientist, and The Martian author Andy Weir. She has found her foray into the world of science communication has provided unexpected benefits. ‘I really enjoy it. It’s a great way to make me a better public speaker … when I stand up to give presentations, I’m really nervous but I can go into a zone and pretend I’m talking to a camera. And it’s helped with my research. My latest experiment was 10 hours. I thought it would take ages, but when I decided to film it, it inspired me to get excited and crack on with it. I might have dreaded it if I couldn’t share it with people.’

Now coming to the end of her second year, Kissick’s ultimate goal is to work on the Mars Rover missions. ‘The year I [finish] in 2020 there will be two missions landing on Mars. That’s really exciting, because they are both going to where there was a water-rich environment. The dream would be to work with them, either carrying on with chemistry or moving into spectroscopy.’ Of course, she laughs, ‘right now I’d just be happy to get my PhD!’