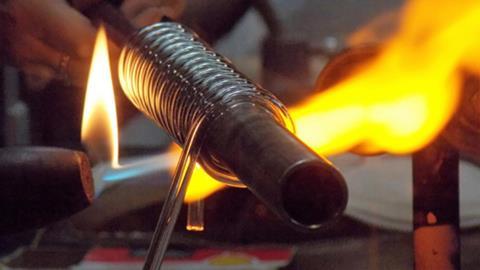 Creating scientific instruments is a rare but highly desirable skill

‘People don’t realise that when you heat glass up, suddenly gravity comes in,’ chuckles Phillip Sliwoski, from the University of Southern California (USC), US. ‘Glass flows and it wants to drop in your lap. That’s a quick reality check.’ 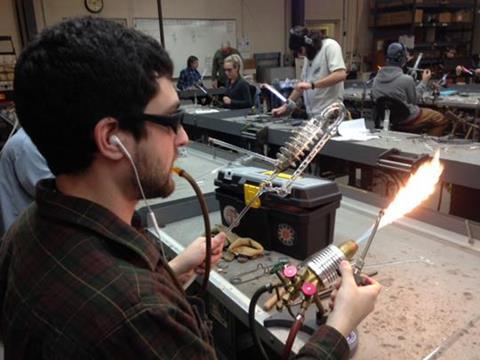 Scientific glassblowing conjures many romantic images, but Sliwoski is quick to shatter illusions about the skills he’s developed over 37 years in the craft. ‘I don’t make things from scratch,’ he stresses. ‘I could theoretically make you a lightbulb. Mine would probably last for 10 seconds before it burned out – or you could go to the local hardware store and buy one for 50 cents that lasts forever.’

His comment brings to mind a question often asked today: in our age of mass production and automation, where do human skills fit? It’s a particularly apt question for scientific glassblowing. The craft involves extreme specialisation in arcane abilities – like redirecting molten glass away from laps – while offering relatively few employment opportunities. How, then, is it possible to ensure there are still capable scientific glassblowers for institutions that do want to employ them?

Researchers using glassblowers’ creations easily recognise the value of their skills. One of Sliwoski’s primary tasks is producing manifolds known as Schlenk lines, the many-valved pipes fixed to the back of chemists’ fume hoods. Scientists usually want bespoke manifolds, often made to suit techniques they learned prior to coming to USC, Sliwoski explains, and draw out their specification for him. To realise their visions, he takes lengths of mass-produced borosilicate glass tubing from a cabinet in his workshop, and commercially-sourced valves.

‘I use heavier wall glass, because you hit it once, and you usually get a reprieve before it breaks,’ Sliwoski explains. He describes his latest project, a 73cm-long manifold with an 8mm valve in the middle, sealed in between two tubes with valves at each end. To attach each of the various other valves and O-ring connectors along the manifold’s side, he first blows a hole in the tube with a torch. He then positions the fitting, and ‘works in’ the seal.

Sliwoski became a glassblower while still in high school in 1980, inspired by the relatively high wage of $5–6 (£4–5) per hour on the job advert he saw. ‘I started doing three hours a day after school, graduated high school and started full time as an apprentice,’ he recalls. From that relatively small-scale workshop, Sliwoski moved through around six different roles, working at Chevron’s San Francisco research facility immediately prior to moving to USC. ‘They still do very complex things that you really cannot ship, so it has to be done on site,’ he says. ‘That workshop has been there since the 1920s and once upon a time they had six glassblowers and one supervisor. When I started there were two of us. By the time I left there were one and a half.’

Miniaturisation is the reason many roles have been eliminated, in Sliwoski’s opinion. ‘You used to need a litre for analysis, and now all you need is a dot on a disposable piece of glass,’ he says. At the same time employers in his area struggle to attract glassblowers, because of local living costs. ‘If you’re from Texas or the Midwest and have a house and a nice yard, in LA you cannot buy a garage for the same money,’ Sliwoski says. ‘It makes it difficult to find people. It’s like San Francisco. After I left Chevron, a year later they still hadn’t replaced me, because they couldn’t find anybody.’

Dennis Briening has also witnessed changes in glassware scale, seeing one extreme when working at the research centre of US chemical manufacturer Hercules during the 1970s. ‘I assisted in building and maintaining a large distillation building with over 25 distillation columns over five metres high,’ he recalls. ‘Large reactors of 50, 22, and 12 litres, distillations, extractions, sublimations, glass column chromatography and filtrations were executed on a grand scale.’ 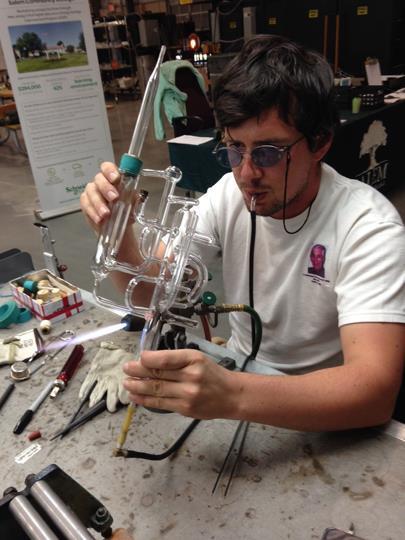 In the 1980s, Briening says, things started changing. ‘Titrations were replaced by pH meters, 12 litre and 22 litre testing flasks were replaced by 500 millilitre flasks due to the ability to test smaller volumes and cost of solvent disposal. Products such as Teflon, Vyton and Kalrez were invented, making agitation and temperature measurement possible using less specialised glassware. Optical instruments of good quality eliminated much glassware in testing.’

But then, things shifted back. ‘Photomultipliers, CAT scan glass envelopes and fibre optics necessitated glassblowers,’ Briening says. ‘Pilot plants of 50 and 100 litres were made available as turn-key operation units with programmable agitation, liquid and solid addition, calorimetry and scalability. As new technologies continue to develop and evolve chemists, engineers, physicists, and glassblowers have more advanced tools to find new solutions.’

Consequently, Briening sees scientific glassblowing as a growing field, in which a lack of staff, ironically, can create a bottleneck. As scientific glass technology instructional chair at Salem Community College, New Jersey, which offers the only associate degree in the subject in the US, Briening helps supply the skills needed. He compares teaching scientific glassblowing to teaching piano, horse-riding, or tennis. ‘We begin with basic hand and glass lathe skills,’ he says. ‘Soon these become innate skills which allow the makers’ mind to free and to be concerned with greater challenges other than hand skills, to create rather than be enslaved to the skill.’

The popularity of the Salem Community College course supports Briening’s positive outlook on scientific glassblowing’s prospects. ‘The program has grown from 37 students four years ago to 105 this year,’ he says. ‘I believe approximately 50% receive employment in the scientific glass field. Many employers have recently been contacting Salem Community College that had not previously heard of our degree program, but employed glassblowers. The recently increased interest has elevated the awareness that skilled glassblowers are available as opposed to employers needing to train them in-house. The 50% of students that do not continue onto employment in the scientific glass field are interested in self-employment in the artistic arena.’

Terri Adams from the University of Oxford, UK, ‘stumbled’ into scientific glassblowing. She was touring the University of Bristol’s chemistry department while waiting to take up a job in forensic science. ‘I had never seen anything like the complexity of the glassware items which were on display, let alone given a thought to how they’d been designed and made or by whom,’ she recalls. ‘I was completely captivated and spent a significant amount of time talking to the glassblower at the display.’ She then saw an advert for a trainee scientific glassblowing technician at Bristol and applied for the role. ‘The rest, as they say, is history.’ 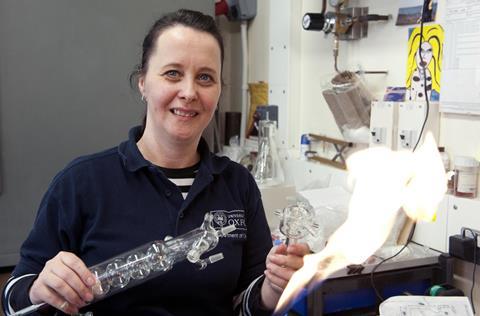 Adams acknowledges that such training opportunities are ‘few and far between’ in the UK, which limits the sustainability of the craft. ‘There are no longer any schools or colleges in the UK teaching scientific glassblowing so the future of this skill is almost entirely dependent on university-based glassblowers and a few businesses that are willing to undertake in-house training. The cost of training is high in both time and materials so it’s a big ask for employers.’

The British Society of Scientific Glassblowers (BSSG), of which Adams is board of examiners qualifications secretary and society librarian, has created a training syllabus. ‘Most UK based apprentices and trainee scientific glassblowers undertake the BSSG syllabus – even production line glassware-based individuals undertake some components,’ Adams explains. Yet with the syllabus today exclusively funded and taught by employers ‘in-house’, there’s a blockage in the flow of trained glassblowers the BSSG is finding it hard to work open.

For example, BSSG developed a National Vocational Qualification (NVQ) ‘to fit the training requirement of our trade’. ‘However, due in part to the relatively low uptake of the examinations, this was subsequently diluted down and chopped up to such an extent that a windscreen fitter could achieve the same qualification as a scientific glassblower,’ Adams says. ‘It’s now useless.’

BSSG has also struggled to get the UK government accreditation needed so the exams can be used in the country’s Modern Apprenticeships. ‘Currently the BSSG is working with the Scottish Qualifications Authority and South Lanarkshire College to try to achieve the required accreditation and ultimately a college base to support the syllabus,’ Adams says. ‘But the cost is the latest stumbling block. BSSG is actively looking to raise funds to undertake the process.’ Meanwhile, the University of Manchester, for example, is keen to support such an apprentice, says Mike Carroll, technical services manager at the university’s school of chemistry. Achieving government recognition could help support and reward employers like Manchester for establishing such schemes, Adams stresses.

At least one UK glassware producer – GPE Scientific – regularly looks to Lycée Dorian in Paris, France, for employees, according to Tristan Beldi, scientific glassblower at the University of Montpellier. When Beldi started his training at Lycée Dorian in 1989 he had no idea what he could do with the subject. ‘I liked it so much that I stayed there for five years and came out with two degrees,’ he recalls. However, today Lycée Dorian’s scientific glassblowing course is under threat of closure, Beldi says.

Yet Adams is adamant that making glassware for science still needs people, including where mass production is involved. ‘Even automated systems of production are dependent on human operatives,’ she underlines. ‘These glassblowers may only ever perform one or two operations as part of an assembly line, and their training base has likely been limited to these particular operations in part as a means of retention. Skilled staff are often poached, as many a university has found out.’ Training to the level of competence a research scientific glassblower needs ‘can reasonably take in excess of 10 years’, she underlines.

The Oxford glassblower is also optimistic both that there are people in the UK who could develop such skills, and that there will be jobs for them in the long term. ‘Artistic glassblowing, studio glass and bead making are on the increase,’ Adams says. ‘There are certainly transferable skills so if an accredited teaching base or model can be established there is already a pool of skilled hands which we might tap into. And there is a definite role in scientific research for a skilled scientific glassblower who can produce bespoke apparatus, perform emergency repairs or in-situ work. This I do not see changing.’