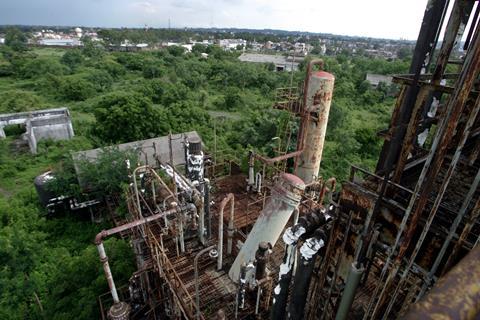 Social scientists have historically neglected thinking about chemistry, according to human geographer Andrew Barry from University College London (UCL) in the UK: ‘[They] have been amazingly oblivious to the significance of chemistry in the economy and society of the 20th and 21st century.’ But this is starting to change.

For many chemists, social science disciplines like anthropology, geography and science and technology studies may seem a world away from day to day work at the bench. But engaging with other disciplines to explore the impact of chemistry can provide a wider context for what goes on in the lab.

In anthropology, a new generation of researchers have started to explore how chemistry has changed not only the physical environment, but the experience of being human itself. The emerging subfield of chemo-ethnography was proposed by American anthropologists and environmental researchers Eben Kirksey and Nicholas Shapiro in 2017. Ethnography is the observational research method used by anthropologists to study human culture; chemo-ethnography studies how chemistry impacts this culture.

‘Chemo-ethnography is simply anthropology recognising that we can’t understand what it means to be human in the 21st century without thinking about modern chemistry,’ says Shapiro, who works at the UCLA Institute for Society and Genetics in California, US. ‘Chemistry suffuses so many different aspects of our social fabric, from what flavours and smells are deemed valuable and alluring, to the levels of persistent chemicals in our bodies.’

Interest has developed hot on the heels of the Anthropocene concept – the idea that our current era is one in which human activity is the dominant influence on Earth, with synthetic chemistry being a huge part of the transformations that human activity has caused. This, and the growing awareness of the climate crisis, has precipitated new concerns around chemistry and chemicals. 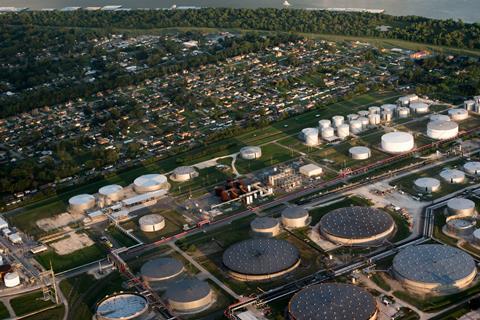 In the US, the locations of petrochemical plants have come under scrutiny from chemo-ethnographers

Chemo-ethnography is a small but burgeoning academic movement. It has its largest presence in the US where it has a strong link to the environmental justice movement, which has examined issues such as the tendency for petrochemical plants to be located near areas where African Americans live. Wider concerns over environmental pollution are creating a critical mass of social scientists scrutinising our chemically engineered world. Shapiro says it’s no coincidence that the 2018 Oxford English Dictionary word of the year was ‘toxic’.

Barry, who studied a year of chemistry as an undergraduate, thinks that social scientists tend to understand the natural world in terms of physics or biology and often forget about chemistry. To redress the balance in his field of human geography, he used his 2017 inaugural lecture at UCL to propose a manifesto for a ‘chemical geography’. His aims are not to be anti-chemical, but to recognise that the chemical composition of atmospheres, landscapes and humans themselves are shaped by political and social factors.

His work has involved studying how chemists work and looks more deeply at some of the ideas they use, picking out the chemical, economic and legal contexts. For example, in 2005 he encountered the concept of chemical space during an ethnographic study of a pharmaceutical drug discovery lab. This concept allows all possible molecules that could exist, within some specific boundary condition, to be plotted in space based on their structural or functional similarity to each other. The idea has been widely employed in drug discovery to explore a spectrum of potentially useful drug-like molecules. But Barry saw that the concept was being used to encompass a wider set of ideas.

The chemists’ categorisation of molecular proximity and distance within chemical space was bound up with non-chemical ideas such as whether intellectual property could be acquired for any particular chemical entity. The concept has similarities to the idea of an oil reserve, which indicates not only a physical quantity of oil, but the financial feasibility of its recovery. Barry’s work shows how chemicals, whether they are drugs, oil or pollutants, have come to routinely exist in a tangle of legal, financial and environmental information. It is these complex relationships that chemical geographers and chemo-ethnographers are starting to probe.

Combining an understanding of chemistry with studies into human society is not new, says Kirksey, who is based at Deakin University in Melbourne, Australia. He picks out pioneering research carried out by anthropologist Kim Fortun on the Bhopal disaster (a gas leak in an Indian pesticide plant in 1984 that is considered one of the world’s worst industrial disasters). ‘What I really like about Kim’s work is that she’s attentive to the specificity of particular chemical species as they emerged in this plant, and is really trying to do a forensic reconstruction of the molecular interactions that led to this explosion,’ says Kirksey. This kind of thorough chemical understanding combined with an analysis of the power dynamics at play typifies the chemo-ethnography approach. 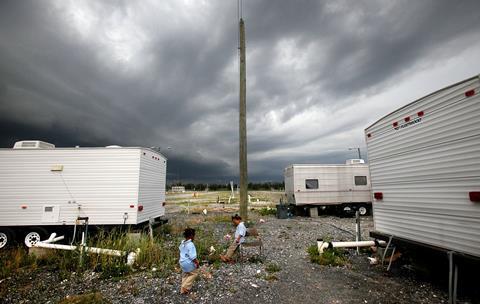 ‘I couldn’t do any of this cultural work without the scientific work, for me it goes hand in hand,’ says Shapiro. His PhD focused on formaldehyde exposure from emergency mobile housing units built to house 300,000 people displaced by Hurricanes Katrina and Rita in 2005. These homes were later sold on, and Shapiro has been tracking them down to test formaldehyde levels, which were very often elevated due to the use of engineered wood and little ventilation in the houses. ‘They were built in 2005-2006 and [the manufacturing and construction] industry says they should have off-gassed completely by 2010, but as I was tracking this grey market, people were getting sick … I wanted to understand if it was potentially related to continuing formaldehyde exposure.’

Shapiro’s work looks at both the cultural and chemical context of the issue.1 He suggests that the smell of formaldehyde and other organic compounds may have in fact been making these houses more attractive to buy. ‘People would spend their life savings on these trailers that are making them sick, and they were buying them largely because they had this new car smell.’

His work has also led him to question the idea of chemical persistence and what sort of chemicals are regulated. Even though formaldehyde is not considered chemically persistent – it has a half-life of an hour in direct sunlight – Shapiro explains that ‘it is persistent in a socio-technical way’. When used in engineered woods and other parts of our built environment it seems to be continuously off-gassing and this likely poses risks to those continuously exposed. ‘I think that there is a possibility for chemists and social scientists to think [together] about concepts like [chemical] persistence,’ he adds. 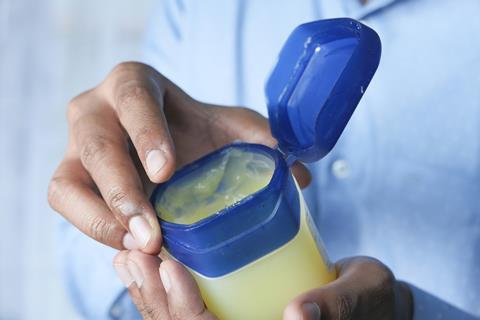 Lubricants like petroleum jelly have had a significant impact on society

Chemo-ethnography is not only focused on environmental concerns. It also probes other fundamental changes chemistry has allowed. ‘One thing we hope to be able to do is chronicle the long-term impact of chemistry … tracing something from a scientific innovation to a product that’s in the marketplace and ubiquitous in the world,’ says Kirksey. Shapiro highlights a 2013 study on lubricants and lubrication from anthropologist Gretchen Bakke that started with the trade in whale fat, which was superseded by the development of petroleum jelly in the 1860s. ‘She’s thinking about how [lubricants have impacted] both the mechanised world – our industrialism wouldn’t work without thinking about the history of lubrication … and then also [human] sensation, and how even the very aesthetics of sex have changed as a result of lubrication.’

This type of work often requires a new type of ‘hybrid practitioner’ – researchers with training in both chemistry and social research who can translate between the disciplines. ‘Some [chemo-ethnographers] have undergraduate degrees in chemistry and turn to the social sciences because they found that they could ask different kinds of questions with different kinds of tools,’ says Kirksey. He has himself recently taken part in laboratory training to understand the science better, and is currently learning how to edit DNA with Crispr-Cas9. ‘I think we’re seeing a rise of these hybrid practitioners,’ adds Shapiro. ‘I see some new [university] programmes emerging that are aiming at dual literacy, which is exciting.’ Shapiro has his own laboratory and is able to shift between collecting analytical data, and critically analysing the politics of his findings.

For other chemo-ethnographers collaboration with chemists is important. ‘We really need to lean on chemists whose expertise can prompt us to ask new questions,’ says Kirskey. ‘We’re hoping to think with chemists about the powerful [chemical] products that have shaped modern life.’ Chemo-ethnographers will often also look to chemists for their analytical tools and know-how, be it mass spectrometry or simple hand-held chemical sensing devices. These kinds of collaborations might allow an understanding of the chemicals in drinking water or in our blood that currently escape regulation.

It’s more difficult to see how chemo-ethnography might impact the work of chemists themselves, but it does provide an opportunity to take a step back and see the bigger picture. ‘All sciences work through a kind of abstraction … and that’s incredibly powerful. The danger of that is you lose the sense of the complexity of the world with which you’re concerned. One of the broad things which social sciences can do is reverse that path,’ says Barry.

‘Helping scientists who are engaged in basic research situate their work in the broader world is something we can offer,’ explains Kirksey. ‘Asking questions about impact and ethics, early and often, is a critical part of research that is accountable to broader demands from society.’

Chemo-ethnography can help chemists understand why certain areas of research or certain approaches have predominated, and can also explore what sorts of chemical questions have or have not systematically been asked. ‘Those are the sort of meta-level conversations that I would love to have with chemists’, says Shapiro.