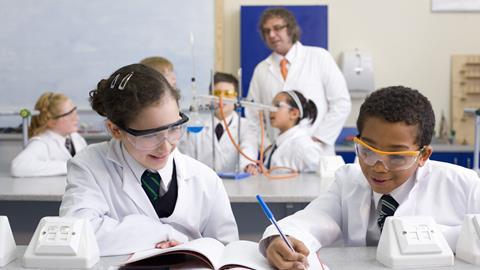 Years of declining recruitment have left the UK desperately short of chemistry teachers. But although headlines warning of the horrors of life at the educational coalface may seem off-putting, there’s a lot to be gained from training as a teacher – as well as the opportunity to enthuse a new generation about a vital and necessary subject.

Rosie Coates caught the teaching bug during her chemistry PhD at University College London, when she opted for an assistantship that enabled her to spend time teaching undergraduates while also doing science outreach in local schools. Realising that a research career wasn’t for her, she took up a role at Cardiff-based Science Made Simple, writing and performing high-octane science shows for school and adult audiences across the country. After a year, she started to question what she was doing. ‘I enjoyed doing the shows but I found it really frustrating that I was going to a school and kids would have all these interesting questions but then I would have to leave,’ she explains. ‘I started to feel that we were filling a gap that should be filled by good teaching instead.’

Coates completed a one-year postgraduate certificate in secondary education (PGCE) at the University of Gloucestershire – the usual qualification for graduates wishing to go into teaching – and she now works part time at a single-sex grammar school in Gloucestershire, teaching combined science to lower years and chemistry at GCSE and A-level.

‘I was surprised how much I’ve loved it,’ she enthuses. ‘I thought that my passion for the subject would be the key thing, being engaged with chemistry and thinking about it all the time. But the thing that makes me get up in the morning is the teenagers – they’re hilarious and also the most interesting people to work with.’

Coates says the teaching workload is intense, and by working part-time she effectively takes a pay cut in exchange for a decent work-life balance. ‘The workload is heavy, but there are plenty of other jobs where the workload is high too,’ she reasons. ‘The rigidity of the school day can be hard too – there’s no flexibility if my daughter needs picking up from childcare early. And there’s always the teacher’s dilemma of whether you use the five-minute break between lessons to go for a wee or a cup of tea. I always pick the tea.’

At the other end of the educational spectrum, Chris Bowstead works as a chemistry teacher at Hollis Academy in Middlesbrough – a specialist school for children with social, emotional and mental health difficulties (SEMHD).

‘I was seduced by the glamour of TV shows like CSI so I started training to be a crime scene investigator at Teesside University, but I soon realised I hated spending time in the lab,’ he says. ‘What I liked was talking about science, investigating it and explaining to other people … so I decided to go into science teaching.’

His next step was a school-centred initial teacher training (SCITT) PGCE at Durham University, which threw him straight into the classroom within two weeks of starting the course.

‘It was good, because I found out straight away whether I could hack it,’ Bowstead says. ‘Kids can be brutal, but I grew up in Middlesbrough and was one of those horrible kids, so I knew how to deal with them. And then I found that I really enjoyed teaching the low achieving sets – they haven’t learned as much as the brighter kids so you get more “wow!” moments when the penny drops. And if a lesson’s boring, they’ll turn round and tell me.’

After a few years teaching at Middlesbrough’s King’s Academy, it was time for a new challenge. Working with SEMHD students felt a logical progression, as he felt it was somewhere he could really make a difference.

‘When I was working in a mainstream school it was hard to build enthusiasm – I’m passionate about science but some people aren’t,’ he explains. ‘By getting these kids to understand that science is everywhere and in everything they do, from letting off fireworks to breaking into a car, we can put science in the real world and keep them interested – oh, and they can set stuff on fire and make things explode in a controlled situation.’

For Fraser Scott, heading into teaching was something he always knew he wanted to do. Following a chemistry degree and PhD in drug design at the University of Strathclyde, he went on to do his PGDE (the Scottish equivalent of a PGCE) at the same institution. After two years of teaching, he became disillusioned with bureaucracy and a constantly changing curriculum and returned to a more traditional science role. After heading back to the research lab, he’s now a senior lecturer in pharmacology at the University of Huddersfield.

‘I always knew I wanted to go into teaching,’ he says, ‘although I also knew I probably wouldn’t want to stay in it forever. But it has served me very well as I now do a lot of teaching at university. It was worth giving teaching a shot – it doesn’t take a huge amount of your life to dip your toe in and see if it’s for you. But definitely get experience in schools first before you embark on it.’

Speaking to those who have stayed in the teaching profession and those who have left, it quickly becomes clear that the individual school environment makes a huge difference between a tough but enjoyable job and a miserable drudge. ‘There’s a massive variation depending on the setting you’re in,’ says Coates. ‘If you’re in a secondary school teaching GCSE and A-level chemistry, then the quality of your life, ability to teach and feeling of self-worth as a teacher will vary tremendously depending on the school culture. This makes the difference between staying in teaching and enjoying your life or not, so finding one that suits you is the most important thing.’

It’s an issue that former council worker-turned-chemistry teacher Karen Lyon recognises only too well. Now in her 50s, she spent seven years studying for a chemistry degree through the Open University, trained as a teacher though the distance learning provider, and eventually taught A-level chemistry at a further education college in Merseyside. However, intense management targets and paperwork ended up sapping the joy she felt for the subject, so she quit to become a maths teacher at a different college where she is now much happier.

‘The pressure was non-stop, gathering all these daft things to prove what you’re already doing, and I’d be working every night till 11pm,’ she sighs. ‘I got a lot out of teaching chemistry and I don’t regret it for a minute, but the management made life too hard … I’m much happier now. I loved the kids and I miss the chemistry itself, but I’m not tempted to go back.’

Those who can, do…

One relatively new route into teaching for people later in life comes from Now Teach. Established in 2016, Now Teach recruits and retrains experienced career professionals who want to make the move back to the classroom – particularly in schools that find it hard to recruit and retain teachers in shortage Stem subjects.

‘We want to make it more acceptable for people who have experience in one career to move into teaching,’ says the organisation’s executive chair, Graeme Danton. ‘As well as teaching shortage subjects, our recruits also bring in life experience, work experience and connections with business that schools are short of. People who have come from industry or research can explain why maths or science is interesting and what it can lead to in terms of careers, and we think that indirect benefit will be as useful to schools as the teaching itself.’

The bulk of the training is on-the-job and the teaching hours are compressed into four days a week, providing flexibility for those who may have commitments such as childcare or looking after elderly parents. The reassurance of being in a group of older career-changers is also more appealing to people who might feel out of place in a lecture hall full of fresh 20-something university graduates. The majority of the group has made it through to the end of the course, with only a few dropping out for personal or family reasons, rather than being unable to cope with the workload. So far, the most tricky issue for some applicants has been the requirement to produce O-Level or GCSE certificates in English and maths – paperwork that may be frustratingly elusive after a decade or more.

‘Often people want to get back to the subject they did at university, enthusing others about topics that excited them when they were younger, and many just want to make a difference to children’s lives or feel they need to get off the career wheel and onto another track,’ Danton says.

The first cohort of nearly 50 trainees (including two chemists) are just qualifying after a year in London, and there are plans to expand the scheme to greater numbers and other areas of the country including the south coast, Midlands and East Anglia.

The Royal Society of Chemistry (RSC) has also helped hundreds of chemists train as teachers through initial teacher training scholarships, run in partnership with the Department of Education. Around 10% of trainee chemistry teachers benefit from a scholarship, which provides £28,000 in tax-free funding as well as access to mentoring, career development resources and two years’ RSC membership.

‘Anyone can apply, so we get a whole mix of people – some of them are career changers, others come straight from university or after a PhD,’ says Annette Farrell, teacher supply programme manager at the RSC. ‘Teaching is a profession suited to people who like children or teens, so it’s useful if people have some experience in school age children before they apply. And although it’s a hard job and a challenging career, it’s never boring!’

For Coates, teaching chemistry has also made her fall in love with the subject all over again.

‘I’ve had to ask questions and explore concepts in a way I probably wouldn’t have done before – I’ve had to learn to love organic chemistry and I understand it much better now!’