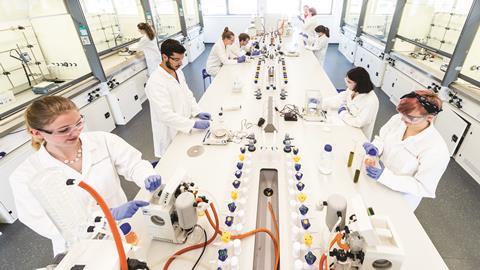 The challenges universities face when relaunching a chemistry department

Lancaster University, UK, closed its chemistry department in 1999. ‘At that point, I think there was almost immediate regret that they had done it,’ says its new head of chemistry, Peter Fielden. He was recruited in October 2012, after the decision was taken to re-open the department. ‘At first there was just me and a part time administrator and a clean sheet of paper,’ he recalls. ‘And that was a thrilling part of the process.’

King’s College London’s also recently reopened its chemistry department, in 2011, after an eight-year closure. Current head of department Paula Booth joined the new department in 2014. She says the closure had positive and negative impacts on the university. ‘It was a long enough period of time that the university as a whole lost sight of how you deal with running what is a very facilities and services intensive, expensive large-scale laboratory subject. It’s challenging to universities in the modern era because it will inevitably run at a loss.’ On the other hand, Booth says, ‘there is the ability to wipe the slate clean; you don’t inherit traditional ways of doing things and chemistry can be very traditional.’

Lancaster and King’s have already seen their first BSc cohorts graduate since the departments reopened. At Swansea, Ian Mabbett is contemplating the same process. He is the project manager for reintroducing undergraduate chemistry at the city’s university from September 2017. ‘We are currently refurbishing a building so we can put in our new teaching lab; we’ve got some academic staff now focused on developing a research strategy and the others are focused on developing the necessary teaching materials and philosophy,’ says Mabbett.

Both Lancaster and Swansea had to start from scratch. ‘The only thing that we used ultimately was the original shell of the building. Everything else was absolutely new,’ says Fielden. A focus for both departments has been creating top-notch teaching labs, with plenty of modern fume hoods and state-of-the-art equipment. ‘My image of an old chemistry department is dark, dingy rooms with lots of dark wooden benches with gas cylinders propped up,’ says Mabbett. ‘For us now it’s much more piped-in gases from manifolds.’ 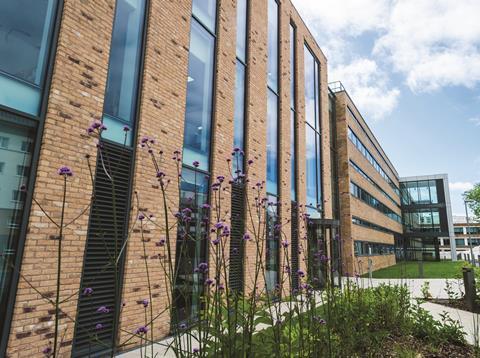 New chemistry departments also need new teaching curricula. ‘From the start, we ensure all bases are covered and the load on students is spread,’ explains Mabbett. Practicals have been a focus of innovation, and Swansea is looking at introducing touchscreen tablets from which students can link to dynamic lab manuals with videos and simulations. ‘That brings in a level of inclusivity,’ says Mabbett, ‘giving [students] the confidence to operate safely and efficiently where they may have struggled in my day.’

At Lancaster, they have also thought about how to restructure a traditional chemistry degree. For example, a topic like NMR is not repeated in each chemistry sub-discipline. ‘We have taken a step back and said “well let’s not have these traditional inorganic, organic and physical (and if you are lucky, analytical) silos – but lets see if we can teach them in a more integrated way,”’ explains Fielden.

Interacting with business is another crucial part of a modern chemistry department (see Chemistry World, June 2016, p68). Lancaster made sure this was integrated into their new department with funding from the European Union’s European Regional Development Fund (ERDF). ‘We ended up having sufficient funds for equipment worth £7 million, to allow us to furnish an annex building,’ says Fielden. This facility, the Collaborative Technology Access Programme, opened in 2015 to support industry in north west England with an extensive array of new instruments.

Of Lancaster’s 24 academic staff, 60% are early in their career – which is quite unusual, Fielden says. However, the staff mix seems to be paying off. In 2014, the then nine-month old department was ranked 10th for research quality in the Research Excellence Framework (REF). Swansea is still recruiting. By October, the university will have six chemists directly employed within the new department, going up to at least 10 next year. ‘I worried that we may not find established, excellent staff prepared to take the risk of joining a new department,’ Mabbett says. However, this has not been the case. ‘We seem to have attracted some top entrepreneurial educators.’

Swansea is also looking to the rest of the university to help it define its research priorities, with a focus on applied fields. ‘But if someone wants to create a Nobel prize-winning group in fundamental organic synthesis, then I think we would certainly welcome them!’ says Mabbett. Other reopened chemistry departments in the UK have been more explicit in their focus on supporting other disciplines; King’s College London exclusively focuses on chemistry and its applications in biomedicine.

Yet collaborative and interdisciplinary research is now such a priority that many UK universities are not focusing in new departments, but on new multidisciplinary teaching and research facilities. Loughborough University is currently investing £17 million in a combined science, technology, engineering and mathematics facility, dubbed STEMLab, which is set to open in 2017. The new facility will provide 3500m2 of modern, energy efficient, and co-located teaching labs. ‘Chemistry students will get the chance to work alongside academics and peers from across the sciences, including those from our new biosciences, bioengineering and biomaterials programmes,’ says Loughborough’s pro-vice-chancellor, Rachel Thomson. ‘We are well known for our interdisciplinary research at Loughborough; STEMlab ensures we transfer this approach to teaching. ‘The building is part of a planned £50m redevelopment, including a newly refurbished chemistry department.

Universities in the US are also creating similar facilities. In August, Yale University reopened its Sterling Chemistry Lab, branding it ‘a citadel of science for the next century’. Part of a $200 million (£150 million) renovation project, the 93-year-old building has been transformed. ‘The renovation project has created modern teaching laboratories for chemistry, biology and physics, all together in one space,’ says Yale’s deputy provost for research, Steven M. Girvin. ‘This is a little unusual, but reflects the growing recognition of the value in cross-fertilisation among the sciences.’ The 14,800m2 of teaching labs contain glass walls to inspire a more connected, collaborative spirit.

But reopening a chemistry department doesn’t end when the first graduates pass through – it’s a long term commitment. After four years, student numbers at Lancaster have not yet reached capacity. ‘We are typically taking on about 25 students per year at the moment but we don’t appear in any league tables,’ explains Fielden. ‘It’s been pioneering for the students that have turned up. They have the most amazing staff-to-student ratio of anywhere around the country.’ Kings is attracting 100 students a year; Swansea, meanwhile, are looking to recruit up to 90 students and are about to start a big marketing drive for 2017. ‘I have a suspicion we will attract students with an entrepreneurial spirit,’ says Mabbett. ‘They will be young people who want to see things done in new and exciting ways.’

And Fielden has simple advice for others embarking on a similar journey. ‘I think never underestimate the amount of space you will need – I can see that it isn’t going to be too long before we need some more labs,’ he counsels. ‘It’s very hard when you start something from scratch to convey how rapidly you are likely to grow.’

An investment of anywhere from £7.5 million upwards will buy you a new chemistry department, though many departments cost significantly more – Imperial College London have just signed a £61m contract to fit out their new chemistry building.

Most of the upfront costs of a department go to creating state-of-the-art labs. ‘The success of the whole project has been because Lancaster University has made a huge commitment in terms of input of the cash,’ says Fielden. ‘It’s been a well-funded project without penny pinching.’

Managing a refurbishment, as well as chemistry curriculum development and staff recruitment, is no small task. However, there are many willing to take on the challenge. ’That’s what lured me over to Lancaster,’ explains Fielden. ‘Because you don’t very often get the opportunity to start something as big as this, from scratch in your own career.’

It may seem like you will need to recruit a whole new academic staff – but the chances are that chemists never really left. Swansea University have been going through a process of ‘identifying people they consider to be part of the chemical science community,’ says Mabbett. ‘That’s probably 40 people who identify as chemists, and maybe another 40 who heavily rely on chemistry in their work … We have this unique opportunity to interact with all of these other research groups.’

A modern department also allows for a more inclusive attitude – such as height-adjustable desks for students with disabilities.

A new department can mix teaching with research in a modern, attractive curriculum. The use of tablet computers can also get students involved in chemical research much earlier than in more traditional courses.