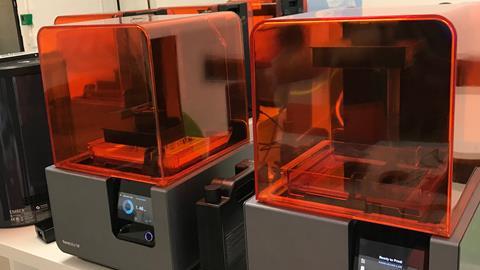 Making matters: the story of PrintCity

In 2017, Craig Banks spotted an opportunity.

The UK government had just released its Made Smarter review; an industry-led review exploring how digital technology could benefit the UK manufacturing sector (called Industry 4.0). The review states that the UK could benefit from embedding digital skills into the workforce to the tune of up to £455billion over 10 years. Banks, professor of electrochemical and nanotechnology at Manchester Metropolitan University (MMU), had an idea to set up a 3D printing research centre and obtained government and industry funding for the idea.

Less than two years later, PrintCity is a reality, serving MMU and its clients, and most importantly, its students. But along the way, it has become something rather different than Banks first thought.

‘We set about on a six month journey [around September 2017] – we didn’t do anything, just market research,’ explains Banks. The research gave Banks and his team a feel for the 3D printing landscape and they quickly realised that the university didn’t need printing services – there was no shortage of them. ‘We had lots of 3D printers scattered across the university that were not being used to their maximum capacity,’ Banks explains. The problem was that the people buying the printers (normally on big grants) did not have the skills to make best use of them. So PrintCity had found its niche: it would develop a programme to teach these digital skills, supplying the future digital professionals for Manchester.

PrintCity began teaching undergraduate students across the university, while also assembling a team to design the UK’s first MSc in Industrial Digitisation. Students learn to design, and to create and fix CAD files and 3D print new objects. But they are also exposed to the unglamorous side of 3D printing – like all technologies, 3D printing fails, which teaches the students to be resilient. ‘It’s how we learn as chemists … when experiments don’t work, you have to learn why, and that is what we teach.’

Banks emphasises that PrintCity had ‘buy-in from the top-down’ and that it was easy to get senior management to support the concept because of the political will surrounding Industry 4.0. That support enabled him to engage with a range of stakeholders and bring them into the project to take on their own responsibilities, from teaching and running the day-to-day services to identifying and bidding for external funding streams.

Banks is particularly proud of PrintCity’s ability to attract a diverse student body, coming from a range of backgrounds such as fashion, fine art, engineering and English. PrintCity values creativity in its students and tries to nurture a ‘disruptive’ culture. According to Banks that means ‘you’re going to disrupt the people that have been set in their own ways’, so there is an emphasis on pushing boundaries, breaking norms and the status quo, and PrintCity achieves this through working in partnership.

One such partnership involved a client whose daughter was born with an upper limb defect, but she was too young to be fitted with the prosthetics offered by the NHS. The client came to PrintCity in the hope that it could provide a solution that would ensure their daughter’s early development didn’t suffer. 3D printing lends itself to such problems – designs were quickly iterated to find something that eventually worked, and the prosthetic will also be redesigned and remade as the girl gets older, helping her brain to engage with her prosthetic arm as she grows and develops. PrintCity not only helped to design the prosthetic, but also worked to secure funding from Starworks (services with dignity) to work with designers and fashion researchers, thus improving not only the girl’s quality of life but that of many other children just like her. Banks says this ‘added value’ is key to making PrintCity’s commercial services more meaningful: ‘Any project that we really like to get involved with, we will help people fund it along the way.’

That ethos of designing, developing and adapting is the story of PrintCity itself – an idea that began in one form has changed to better fit the needs of the people it serves. And now, working together, its collaborations stretch the boundaries of what can be achieved from individual projects. As Banks says when asked about the project’s success, it’s all about the people involved: ‘It does need hard work and dedication, but you’ve got to build a good team around you.’