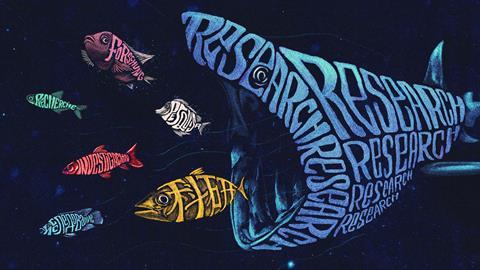 Publish in English or perish

With most global journals only publishing in English, mastering the language has effectively become a requirement for a successful career as a scientist. According to SCImago Journal Rank, a system based on the number of citations, the top 10 chemistry journals in 2020 were based in either the UK or US. The publish or perish nature of research, where you not only need to get published but also need your work to be cited, therefore puts pressure on scientists to write up their research in English.

The Organization of Ibero-American States found that in 2020, 95% of all published work in science journals was in English. Ángel Badillo, a senior analyst of Spanish Language and Culture at the Real Instituto Elcano in Spain, says ‘if you’re writing your papers in Spanish or Portuguese [or other non-English languages], you’re assuming that you’re not at the front line of the discussion’. Even if the research is groundbreaking, it is unlikely to be published in international academic journals. ‘Writing science in English has become a question of prestige,’ says Badillo. ‘If you don’t have a couple of papers included in the journals [indexed by] Clarivate or Scopus, you will not make the right progression in your career.’

If you have a language that is not useful, is not producing new terms and is not at the forefront of knowledge production, your language is going to get poorer and poorer

Without journals offering translations of literature, finding relevant non-English work is a challenge and reduces the number of citations. Tatsuya Amano, an Australian Research Council Future Fellow working in ecology and conservation, explains that ‘the first step for increasing the visibility of such non-English-language literature is to make sure to provide English abstracts and titles’. This is a requirement for papers to be indexed in Clarivate or Scopus. However, such translations must normally be provided by authors as journals generally do not provide them.

‘Science has to be open, also from the point of view of making every citizen able to access the results of our work,’ explains Badillo. But unless you can read academic English, paywalls are not the only barrier to accessing scientific research. Ana Maria Porras, a biomedical researcher at the University of Florida, US, and a science communicator, says access to articles in multiple languages is especially important when research is based in another country. ‘I have a paper that just came out that used samples from a cohort in Guatemala and in the Fiji Islands,’ says Porras. ‘My paper, right now, is only available in English.’ It’s common for papers to not be available in the languages of the populations involved in the research; the English language acts as a gatekeeper over the results.

‘It is incredibly useful that we now have this one language that if you learn, you can communicate with a lot of researchers all around the world,’ says Porras. ‘It accelerates the pace of scientific progress.’ However, it should not become the case that only English is used in science, excluding many from the community and the global conversation. Porras wrote a paper with Melissa Cristina Márquez, a marine biologist, on the importance of science communication in multiple languages largely out of personal frustration about the lack of support. ‘The fact that it has been so widely read and shared means that this is really a topic that resonates with a lot of people and plays a big role in their lives.’

Use it or lose it

The longer that English remains the primary language of science, the harder it will be for other languages to be used to communicate science. ‘If you have a language that is not useful, is not producing new terms and is not at the forefront of knowledge production, your language is going to get poorer and poorer,’ explains Badillo. Sibusiso Biyela, a science communicator in South Africa, agrees: ‘One of the biggest ways to promote a language … is to have those languages take part in knowledge generation, and in science and research.’ As science is dominated by English, other languages are not given the chance to update their own lexicons.

‘The lack of terms in isiZulu [one of eleven official languages in South Africa] that talk about specific topics and science usually informs what I can talk about,’ explains Biyela. Because of this, ‘a lot of things I’m talking about have to be in English, but that’s what I’m trying to change’. Where possible, Biyela avoids translating articles from English, instead approaching ‘the whole thing from isiZulu, with all the cadences or the mannerisms of a speaker who would be reading’.

When faced with a topic that is difficult to explain in current isiZulu vocabulary, Biyela takes the opportunity to create new words. For example, Biyela needed a word for ‘dinosaur’ in isiZulu. He came up with Isilwane sasemandulo, which literally translates to ancient animal. This is more accurate than dinosaur, which comes from the Greek sauros and deinos for terrifying and lizard respectively. ‘When I was describing [Isilwane sasemandulo] in isiZulu it sounds fantastical and crazy … but when [the readers] realise that it’s a dinosaur it suddenly makes sense,’ says Biyela. ‘They walk away knowing more about dinosaurs than someone who speaks English, who takes it for granted that they know what a dinosaur is.’

A matter of interpretation

It’s not only written academic work that is restricted to English speakers, but also conferences. A recent study found that a third of doctoral students chose not to attend international conferences due to the requirement to use English in presentations.

Porras says ‘we see this too, if we think about sign language and people also not having access to scientific conferences.’ Robin Preston, Director of Meetings Operations at ACS, said that ‘as part of the American Chemical Society’s commitment to cultivating a diverse, equitable, inclusive, and respectful community of chemistry professionals, ACS provides sign language interpreters upon request for attendees at national and regional conferences.’

Language interpreters at events would make these accessible to more students and researchers from different backgrounds. ‘I personally don’t have any experience yet [of interpreters],’ says Amano. However, a recent online seminar series was translated live using simultaneous interpreters.

Most journals allow researchers to provide translations of abstracts, but will only include them as part of the supporting information — which is not very visible

There are scientific translation specialists, but they’re rarely used in academic contexts. Martin Janda, a Czech translator who previously worked as a biochemist, says that from his experience ‘what gets translated [into Czech] are drug leaflets, patient information, instructions for use of various kinds of medical devices … clinical trial documentation, the commercial things’, depending on the market and consumer needs.

Janda adds that publishing houses have no incentive to offer translations, especially because most Czech academics ‘need to understand at least some English, and if you don’t, you probably learn on the fly’. Or, they use Google translate to get the gist of things – especially as automatic translations have become increasingly accurate.

It may not be financially feasible for research institutes to hire translators for the vast quantity of research constantly being produced; however, translating just the abstract would be an improvement. But even when translations are provided by researchers, many journals do not actively highlight them. ‘Based on my experience, most journals would allow it when requested, but then only … as a part of the supporting information,’ explains Amano. ‘The problem is that the supporting information is not very visible.’

Increasingly, multilingual science communicators are using platforms like YouTube to reach different audiences to traditional media. Examples include maiLab by Mai Thi Nguyen-Kim, who creates videos in German on a variety of science topics, Kainaat Astronomy’s videos about astronomy in Urdu and Manual de Muno’s with a range of science videos in Brazilian Portuguese.

Nearly 60% of the global population has access to the internet and social media use is on the rise. Porras says ‘you can connect with people in a much more direct way, so I think it removes some of those additional barriers to access.’

Porras uses social media to teach people about microbiology. ‘I started doing that in English, but I am originally from Colombia and after a few months my cousin was like, “I love everything that you’re doing but I can’t understand it!”’ This prompted Porras to also create an account in Spanish alongside her existing English one.

Porras also crochets microbes to use at science fairs and on social media to visualise what she’s explaining. Porras has crocheted more than 80 microbes to ‘attract you with cuteness and then bring you the science’. ‘The really cool thing about art is that it can help us break down those language barriers,’ she says. She hopes to work with teachers to begin incorporating more art into science lessons.

The prestige of the English language means that in some countries, science is taught only in English, giving the impression that science isn’t for everyone. As Biyela says, ‘it’s always a revelation when people hear that white people didn’t invent science’.

Learning in a foreign language can make it harder for students to see how science applies outside of the classroom. Biyela describes learning about the Milky Way in English, and then looking at the uthingo Iwenkosazana every night. ‘It took me a long time to connect the two because I was being taught in English.’ Biyela hopes this will change, saying ‘I would love to, in the near future, sit in a room with teachers and just discuss how to teach kids scientific concepts in isiZulu because [teachers] already do such great work in English’. Biyela adds that ‘you can’t just take English strategies and then do them in isiZulu’.

Assess quality of science, not language

Many scientists feel that their papers are unfairly criticised when their writing is not the same quality as native English speakers, despite the difficulties of conveying complex ideas in a foreign language. ‘Unfortunately it is still very common that reviewers (or sometimes editors) raise the quality of English writing as a reason for rejection,’ says Amano.

A study of Colombian doctoral students reported that 43.5% had experienced at least one rejection or revision of their work due to the language, and not because of the science. ‘I believe every journal should have clear guidelines for reviewers and editors stating that any papers should not be rejected due to the quality of English,’ says Amano. He suggests that reviewers provide specific feedback if commenting on the grammar of a paper. For example by saying, ‘this sentence is not clear – please rephrase it’, instead of general comments like ‘English should be improved throughout the manuscript’.

Having a mutual language is useful for collaborations – indeed, this article would not have been possible without English as I am linguistically limited to English and, at a push, Hungarian – but this can also be done in languages other than English. Research is a global effort, and it’s important to make sure that any language can be used to conduct research, publish papers and educate the next generation of scientists. ‘There’s nothing special about English itself,’ says Biyela. ‘The only scientific language is mathematics, everything else is just how we try to understand science and communicate it.’