A little gamble in your career is a healthy thing, if you’re smart about it 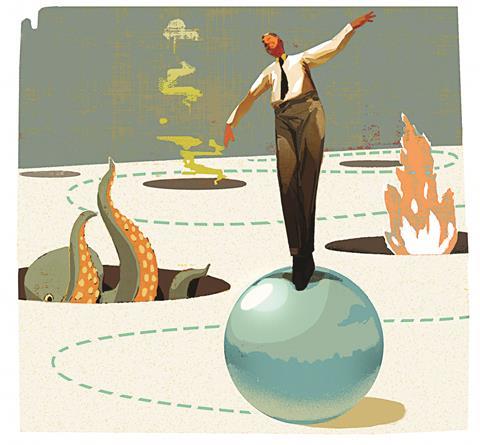 Human beings are awful at calculating. In June I was at the Lindau Nobel laureate meeting, where Turing award winner Joseph Sifakis told me how to beat the Turning test: the way to distinguish between human and computer. ‘Just ask it to tell you pi to 9000 digits,’ he said. A human can’t do maths that quickly; a computer wouldn’t realise it was being tricked. Another difference is that computers make decisions based on the cool logic of, well, machines, minimising risks by processing algorithms. For human beings, weighing up risk is more emotive. It’s exciting. It can be scary. But rolling the dice is an inherent part of who we are.

At the same meeting, 2016 chemistry Nobel winner Jean-Pierre Sauvage told me his own thoughts on risk. An expert in inorganic photochemistry, Sauvage noticed that his work was drifting into a new, unexplored field: molecular machines. He took the leap and never looked back. ‘If you jump in it, if you are successful, you open up a new field.’

Looking through the annals of chemistry, there’s a clear pattern of taking sensible risks to get rewards. A little gamble – not a reckless hail Mary but a decision built on solid foundation – seems to be a good thing. Take this year’s Chemistry World Entrepreneur of the year, Andrew Hopkins. Combining industry with academia, he was still willing to up sticks and move from Kent to Dundee to chase his dream. Or look at the entrepreneurs behind Sugru, now a worldwide force in mouldable glues; its parent company was founded by a design graduate with the aid of a materials scientist. Neither of the Sugru team had business expertise – they just knew that they had a good product. Both entrepreneurial ventures took a risk – a smart one, where they did all they could to stack the odds in their favour, but a risk nonetheless. It paid off.

Business culture emphasises risk and reward as part of the process. Indeed, academic careers are often criticised as ‘playing it safe’ (although I imagine few academics would agree). And if branching out into the world of commerce interests you, we’ve put together top tips from some of the UK’s best science entrepreneurs, including Mark Hammond, who co-founded start up Deep Science Ventures and who says there’s no real difference between academia, industry or striking out on your own: ‘The first couple of years are a search for something that works – it’s science.’ You can find the link below.

Hammond makes it sound simple. It isn’t. But no career blossoms by playing it safe. Taking a chance isn’t a guarantee of success, but it seems to be an essential ingredient.