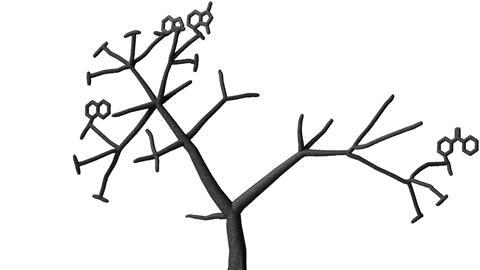 This year’s Chemistry World Entrepreneur of the year is Andrew Hopkins of start-up Exscientia and the University of Dundee, UK 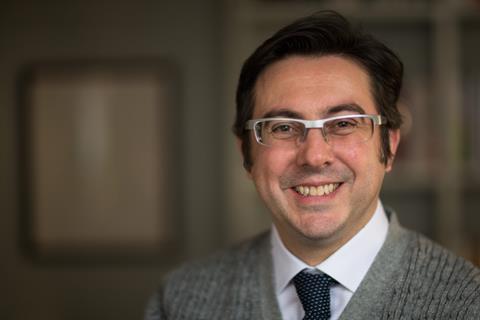 Hopkins got hooked on chemistry early, and moved between academia and industry to further his vision of computer-aided drug discovery

Andrew Hopkins’ route into the world of science has a familiar start – an inspirational chemistry teacher at school. Less predictably, he made a career in pharmaceuticals after getting his first taste of industrial chemistry in a steelworks.

Hopkins grew up in Neath, South Wales, and his first summer job was in the labs at the British Steel plant in nearby Port Talbot. ‘By then I’d already got the chemistry bug,’ he says. ‘What I loved about chemistry is that it is the “liberal science” that allows you to go in many different directions, and it seemed like a natural choice to follow my passion.’

Armed with a scholarship from British Steel, he headed to the University of Manchester to study chemistry in 1990. ‘I like to joke that it was harder to get into than any other university because the whole Madchester music scene was taking off,’ he claims. When he wasn’t enjoying the city, he developed an interest in computational chemistry and its application to pharmaceuticals via his third-year project, but the scholarship required him to work at British Steel for at least a year after graduation.

So he returned to the labs in Port Talbot, spending an enjoyable year as a surface scientist, but turned down a promotion to return to academia, realising his interests really lay in pharmaceuticals. He joined structural biologist Dave Stuart’s labs at the University of Oxford, at the time when they were solving the crystal structure of HIV reverse transcriptase in collaboration with GlaxoWellcome.

‘To get into HIV research with structure-based drug design approaches back in 1994 was an incredible opportunity,’ Hopkins says. ‘The idea of understanding a disease from an evolutionary viewpoint to inform drug design still resonates today in how Exscientia is approaching the design of anticancer agents. It really changed the direction of my career.’

That project gave him the chance to experience many aspects of the drug discovery process. ‘We designed inhibitors to overcome some of the drug resistance,’ he recalls. ‘I spent a season at the GlaxoWellcome labs in Stevenage making the compounds I’d designed, and vividly remember the excitement of discovering the first molecule we’d made was active.’

It also gave him an introduction to the interdisciplinary nature of the drug discovery process – chemistry, biology, pharmacology, physics and even economics all play their part, he says. And he was certain that he wanted a career in the field after his DPhil, even turning down a lectureship in Cardiff to go into industry. ‘Back in 1998, the most exciting place to work was Pfizer,’ he says. ‘It felt like a major blockbuster drug was being launched almost every month. It was an incredible atmosphere.’

He joined Pfizer at the time the human genome was being sequenced. This sparked his interest in informatics approaches to drug design, and how these data could be applied to help drug discovery. ‘There was an explosion of information, and a lot of the ideas that later became highly cited publications came from those discussions,’ he says. These included topics such as the druggable genome, ligand efficiency and network pharmacology – all of which are familiar topics to drug discovery chemists today.

As part of a new target analysis group at Pfizer, he did deep dives on potential new protein targets, digging out all existing data to inform future strategies. ‘We saw nearly every project in the portfolio, which meant we could start to see connections between different projects, and how they might fit together,’ he says.

This led to Hopkins starting an indications discovery group in 2000. ‘I remember at the time thinking we should form a spin-off company – it was certainly a good time to raise money!’ he says. ‘But we realised that Pfizer was the best place to do it, as it had far deeper resources, from clinical idea through to prosecution.’

In 1998, the most exciting place to work was Pfizer. It felt like a major blockbuster drug was being launched almost every month. It was an incredible atmosphere

One of this group’s functions was to look at repurposing – could drugs have other indications? ‘Serendipity had led to Viagra’s [sildenafil] clinical application in erectile dysfunction,’ he says. ‘Was there enough evidence that we could have done that rationally?’ The team started to mine information, thinking about large-scale approaches to discovering hidden gems in the literature. 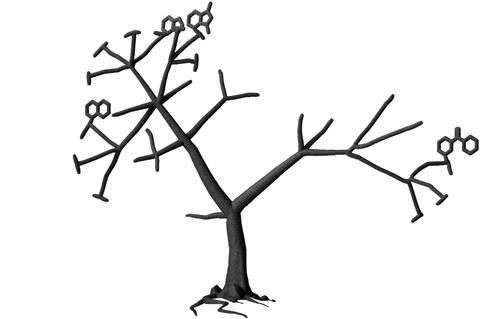 They rapidly realised it was impossible to make connections between different observations in the literature in a rational way: it relied on the happenstance of people noticing them. Pfizer put together a team of a dozen scientists, ranging from chemists to clinicians across the business, to look at the problem. IT systems were built to integrate data and help mine the literature for potential targets, and what they might be used for. ‘A couple of Phase II trials were initiated from that work, and we realised that small team of people could generate a lot of value by harvesting information correctly,’ Hopkins says.

A couple of big, unwieldy beasts remained untackled, however – chemical information and structure-activity relationship data for pharmacological information. ‘These sat in many different databases and paper journals, which were not easy to mine,’ he explains. ‘We started to integrate all Pfizer’s data, which sat in many post-merger legacy systems. We wanted to connect the screening data to compounds, and allow many more questions to be asked of those data.’

Building the data model was a huge task, but the result was a new data warehouse that could be interrogated. ‘We could see the chemical space for the first time, and the links between it,’ he says. ‘Integrated data allowed us to apply machine learning for the first time. We could begin to predict what protein targets a molecule might be acting against, and the implications for drug efficacy and safety.’

Hopkins realised that developing this work would be easier in academia, and he left Pfizer for the University of Dundee in 2007, where a drug discovery unit had just been set up. ‘It was quite a big move, from east Kent to northern Scotland!’ he says. His then-girlfriend, now-wife, Iva Navratilova, an expert in applying surface plasmon resonance screening to G-protein-coupled receptors (GPCRs), moved north with him, too. One of his first recruits, Jérémy Besnard, was a former Pfizer intern, and is now Exscientia’s chief technology officer and winner of this year’s Royal Society of Chemistry rising star in industry award.

A key aspect of his research was the application of machine learning approaches to drug design. An early success involved feeding historical data for the project that discovered erectile dysfunction drug tadalafil (Cialis) into the evolutionary drug design model. The aim was to see if it could evolve the drug from a hit compound, given only the available data up the discovery of that hit. ‘The algorithm identified tadalafil as the top scoring compound out of the hundreds of thousands that were evolved,’ he says. ‘I realised we had something that might work, and it gave us the confidence to build a system that could advance drug design.’

The system was being ‘trained’ to think like a human, using data from medicinal chemistry. ‘We wanted to avoid the pitfalls of previous rule-based design approaches, which often came up with ugly compounds chemists would never make,’ he says. 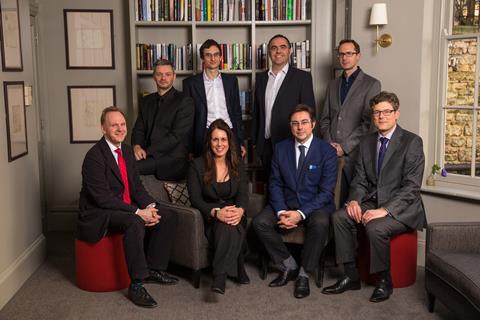 Exscientia spun out of Hopkins’ lab at the University of Dundee, and now has a team of 12, combining expertise in drug discovery and new technology

Whereas academia is ideal for investigating early ideas, their commercialisation is almost always best in industry, and spin-out company Exscientia was formed in 2012. Rather than raising capital from angel investors or venture capital firms, a research project was set up with Lilly, then one with Janssen, and another on phenotypic drug discovery with US-based Sunovion. ‘It meant we had non-dilutive revenue coming in that allowed us to develop the company, pay the staff and develop the systems but, more importantly, work with pharma companies conducting real projects to test the system, and show that it works,’ Hopkins explains.

As a company, we are now equally interested in IA – intelligence amplification – as we are in AI

Another project, with Sunovion’s parent company Sumitomo Dainippon, led to the first clinical candidate designed by algorithm, a bispecific dual agonist of two GPCR subfamilies, which is moving towards the clinic. ‘We did it within 12 months of starting off with just a target product profile, and in fewer than 400 molecules,’ Hopkins says. ‘This is less than a quarter of the time and cost one might normally expect, and gave us real confidence that the system could be optimised for a closed-loop approach to drug discovery.’

About 30 different projects on active chemical series have now been run, including a joint immuno-oncology project with Evotec. ‘We already have a development candidate-quality compound we are excited by, after nine months and 200 molecules,’ he says. Further deals have been signed recently with Sanofi and GlaxoSmithKline.

Exscientia now has a team of 12 that combines experienced drug hunters with technology specialists, and is about to open a new office in Oxford to supplement the lab in Dundee. Hopkins has reduced his university responsibilities to focus on the business, although he is still involved in other projects including the National Phenotypic Screening Centre in Dundee and Oxford, and the European Lead Factory in Glasgow.

He claims the way artificial intelligence (AI) has evolved in chess since Garry Kasparov was beaten by IBM’s Deep Blue 20 years ago is a good analogy for the future of computer-aided drug design. ‘When we first started Exscientia, people were wary that machines would take their jobs,’ he says. ‘But it’s not a conflict between human and machine. After Deep Blue, Kasparov realised the future lay in synergies between human and machine, and introduced centaur chess, which combines humans and algorithms. Centaur teams can beat any human – or any algorithm.’

The goal is not replacing people, Hopkins believes – it’s about enhancing their capabilities and productivity. ‘As a company, we are now equally interested in IA – intelligence amplification – as we are in AI,’ he claims. ‘How do we harness the power of the AI system’s tactical abilities with the strategic and creative insight a human can bring, and discover drug molecules more quickly?’