‘I believe a chemist should be one who discovers new patterns and creates new compounds,’ Lina Zhang states, setting out her viewpoint on science. ‘The thrill of the challenge and its fulfilment drives me to work night and day on my projects.’ 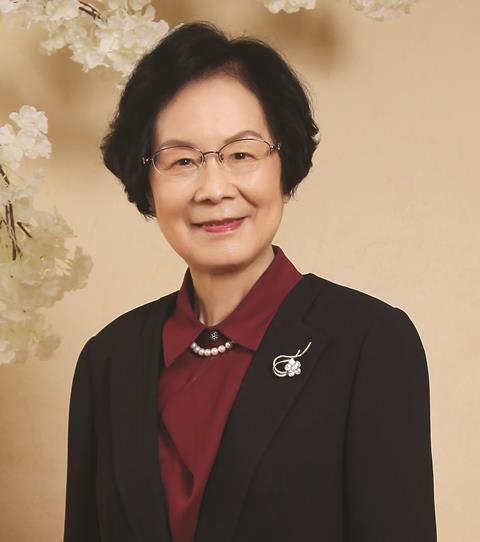 It’s this work ethic that has taken Zhang to the pinnacle of China’s scientific community. Since graduating from Wuhan University in 1963, she has published 530 papers, authored 16 books, and been granted nearly 100 domestic and international patents. But Zhang has no intention of resting on her laurels – her energies are still fully directed at making a global impact in green chemistry.

‘I came to the deep realisation that our oil and coal resources will someday be depleted and that we must start to utilise renewable resources to replace them,’ Zhang explains. Initially working at the Railroad Academy of Science in Beijing focused on synthetic plastics and natural rubber, she returned to Wuhan to study natural polymers. This led her to take a Japan Society for the Promotion of Science scholarship at Osaka University for two years in 1984, where she studied polysaccharide solutions. ‘That taught me how to systematically perform research on macromolecular fundamentals, as well as realise just how much developed countries valued the research and development of renewable resources.’

Returning to Wuhan University, Zhang – along with husband Yumin Du – focused on expanding the use of chitin and cellulose as functional materials. Noting the environmental impact of treating cellulose with carbon disulfide and sodium hydroxide, Zhang set to work. ’The use of cellulose-CS2/NaOH solution in the manufacturing of rayon fibres and transparent cellophanes in China is still widespread and increasing … I made up my mind to search for a new, environmentally friendly solvent to replace the toxic CS2 component.’

In 2000, sponsored by the Natural Science Foundation of China, Zhang’s team found an alternative. ‘Our team worked night and day,’ Zhang recalls. ‘Eventually we had a breakthrough and found a low-cost, less toxic NaOH/urea aqueous solution that could quickly dissolve cellulose at -12°C within two minutes. Out of that solution regenerated cellulose fibres are spun in pilot production and a series of new films, gels, microspheres, aerogels and plastic-like materials have been formed. These new products are safe, biocompatible, biodegradable and can truly be classified as eco-friendly.’ Recently, her has discovered cellulose and chitin materials that can dissolve at low temperatures, which could prove useful for biomedical science, energy storage and wastewater purification.

Zhang’s work saw her become the first Chinese scientist to win the American Chemical Society’s Anselme Payen award in 2011, leading to international recognition and expansion of her team, which now includes 50 doctoral graduate students and three postdoctoral fellows from China and France.

Still, Zhang is not finished, and has turned her attention to the ocean. ‘The oceans’ inhabitants comprise 80% of living species on Earth,’ she explains. ‘Marine life has higher bioactivity and more functions compared with organisms on land, but are less explored and investigated.’ Zhang’s aim is to create renewable resources that will never be exhausted, are environmentally friendly and can biodegrade at above 25°C in soil – avoiding the ‘white pollution’ caused by plastics.

CV: B.S, Wuhan University, academician of the Chinese Academy of Sciences and fellow of the Royal Society of Chemistry. Winner of the Anselme Payen Award 2011

Yet while Zhang’s work is focused on the future, she is also delighted by the progress the scientific community has made during her career, both in China and globally. ‘Science education has begun emphasising more on cultivating an innovative consciousness and the hands-on abilities of students compared with when I was in school,’ she says. ‘I was only learning the background knowledge and following the tracks of previous scientific research. Nowadays, China’s science education and science research have made big jumps in progress.’

This next generation fills Zhang with hope that science can solve the problems of moving to renewable resources. ‘Young scientists have mastered the latest scientific techniques, have access to the best technical knowledge and are full of energy,’ she says. ‘They are a new force, with plenty of potential. But there are no shortcuts in scientific studies – only those who brave great ordeals and endure heavy toils can make major breakthroughs. My advice to young scientists is to love science and be prepared to sacrifice in order to make the next big innovative contribution.’