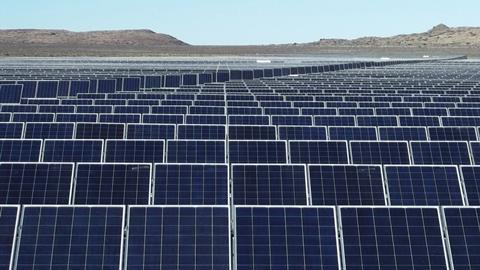 Energy storage is needed to avoid wasting excess electricity from solar and wind – and a new analysis finds many options are surprisingly affordable. Oliver Schmidt and colleagues at Imperial College London see technology costs falling similarly rapidly as deployment expands. ‘There is no fundamental advantage of a certain technology in terms of capital costs,’ Schmidt tells Chemistry World.

While cost projections exist for individual technologies, the Imperial team noted that there was no evidence-based comparison between them. The researchers therefore applied an ‘experience rate’ approach to eleven vehicle, electricity grid and home energy storage technologies. The method looks at how costs have fallen as manufacturers have deployed systems and learned how to make them more cheaply. Projecting that these trends will continue can then be used as an indicator of future costs.

Schmidt’s team found capital costs of home and grid-scale systems generally heading towards $340/kWh (£263/kWh) once 1TWh of capacity is installed for each technology. For comparison, the UK consumed 337.6TWh of electricity in 2016. This was true for hydrogen fuel cells and lead acid batteries for homes, lithium-ion batteries on home and grid-scale and grid-scale vanadium redox flow batteries. 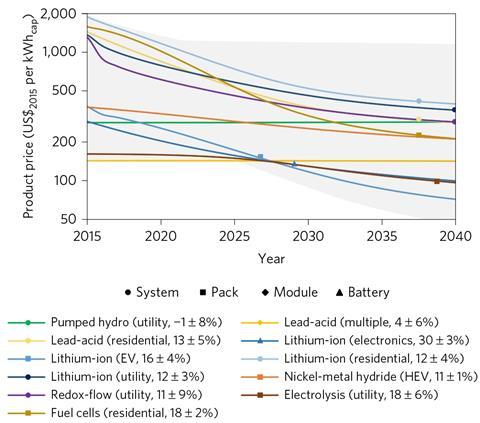 Costs are projected to fall rapidly for many energy storage technologies

This figure is close to the cost of pumped hydroelectric storage, where water is driven uphill by excess electricity and allowed to flow and drive a turbine when needed. With over 1TWh already installed, pumped hydro costs less than $300/kWh.

Similarly, the scientists forecast that the cumulative costs of installing 1TWh would be generally higher for home and grid-scale storage than for vehicles. Home lithium-ion batteries could be most expensive at $510 billion. However, by comparison with the $349 billion spent on renewable energy in 2015 these figures are ‘reasonable’ Schmidt says.

Schmidt highlights that such capital costs are only part of figuring out how economical energy storage is. ‘If you want to compare how competitive they are, you need to consider additional parameters like lifetime and efficiency,’ he says. ‘We do that with electric vehicles. We can say with good certainty that they will be competitive with conventional cars within five to 15 years.’

Peter Taylor from the University of Leeds calls the study rigorous and salient, and says the forecast that technologies could reach a similar price after 1TWh of capacity is installed is ‘good news’. ‘These results point to the fact that, while significant future price reductions can be reasonably expected in energy storage, greater policy intervention may be needed to accelerate early deployment in key applications in order that the technologies reach price-parity sooner rather than later,’ he adds.