The changing face of the PhD

Universities in the UK are exploring the European approach of building a thesis from published papers, finds Nina Notman

To get a PhD in chemistry, you need to write a thesis that describes what research you conducted over the preceding years, how, why and so on. It is with this document that you make your case for the qualification, so clearly what you write matters – but how you write it also matters, and in the UK that is changing somewhat. 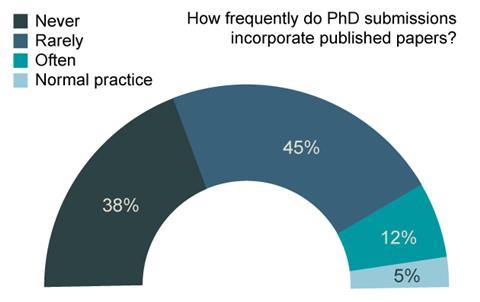 In the UK, students typically write a long, chapter-based document. In other European countries, such as Sweden and Germany, however, a shorter document comprising a series of journal papers is common. A recent report from the UK Council for Graduate Education (UKCGE; an independent, representative body for UK postgraduate education) found that 62% of the 50 UK universities surveyed now see ‘embedded’ journal papers forming an integral part of some of their students’ PhD theses. The UKCGE calls these integrated theses.

Integrated theses have many advantages over the traditional model, explains the report’s lead author Bruce Christianson, a professor of computer science at the University of Hertfordshire. ‘In the sciences, you really want to have written papers before you get your degree, and being compelled by regulations to rewrite papers in monograph form really slows students down [when preparing their theses].’ Timed-pressed students sometimes prioritise writing their theses over papers causing publications to be delayed, he adds.

The University of Cambridge permits integrated theses. ‘In the sciences, many, if not most, theses contain chapters with embedded published material,’ explains Daan Frenkel, head of the university’s chemistry department. ‘The thesis should be all of a piece, so that papers, if included, hang together and are set in the context of the overall narrative - the student is expected to provide a specially-written introduction and conclusion linking each paper to what comes either side.’ It must also be clear what parts of the paper the candidate contributed to.

The University of Manchester also permits embedding papers in theses. Professor of organic chemistry David Leigh, however, goes one step further, allowing his students to construct their theses entirely from papers - either published journal papers or monographs written in the same style. ‘The format of my group’s PhD theses is such that each chapter is effectively a stand-alone paper - either published or in the style of a paper intended to be published. This is normally a word-for-word reproduction of the paper, plus a few page synopsis at the start of each chapter to put the work into context and to state what work in the paper was done by the PhD student,’ he explains. ‘The supporting information from the papers provides the experimental section for each chapter, usually abridged to only feature the thesis author’s experimental work.’

Chapter one is a review of the subject area, usually in the form of a journal review paper. It may be a published paper, word-for-word or abridged if the original piece was too long, or it may be a paper simply intended for publication. At the end of the thesis, the student normally includes an outlook section, in which they describe what was discovered during this work programme and their thoughts on future directions.

Leigh says he switched to this model about 12 years ago for a number of reasons. ‘The unit of research in our group, and usually in academia, is the paper. In working in this way, the student learns how to plan and write papers, and how to plan and execute a research project efficiently and effectively, focusing at a relatively early stage on what needs to be done [for publication],’ he says.

As well as being shorter, theses based entirely on papers are faster to complete. Leigh estimates it takes his students four weeks to put their theses together, versus four to six months for a traditional PhD theses. His students therefore have more time in the lab compared with their peers. ‘Everything takes time. One has to balance whether it is most useful and productive to write a PhD thesis in the classical way or whether it’s more useful and productive to spend more time carrying out research,’ says Leigh.

If there is a problem with this approach, it is that journal papers don’t normally include information about the synthetic routes and experiments that didn’t work. ‘In part to address this, the members of my group produce flowsheets, kept in a group repository, of what everyone has done each month and what’s worked and what hasn’t,’ says Leigh. ‘The adoption of electronic lab notebooks will make the loss of “negative results” from these PhD theses even less significant in the future.’

The theses written by Leigh’s students are one end of a wide spectrum, but embedding any published work is still unusual. The UKCGE survey found that at only 5% of the participating universities is it the norm for publications to form an integral part of a PhD thesis. A thesis consisting exclusively of publications was the norm at only one of the 50 universities. It was also uncommon for a student to reference their own published papers within a traditional thesis (7% of universities said it was the norm) or include them in an appendix (10% said it was the norm). The figures are across all subject areas, and the report noted that embedding papers was more popular in STEM areas than in the humanities. Still, Leigh, says that most UK chemists write traditional theses.

Christianson, however, sees further change a foot. ‘Based on what people are telling us, in five years’ time, a significant minority of theses will be integrated in a number of disciplines,’ he says. ‘We don’t see it as pushing the traditional thesis out; we see it as a viable alternative that’s going to be attractive in some particular areas.’ 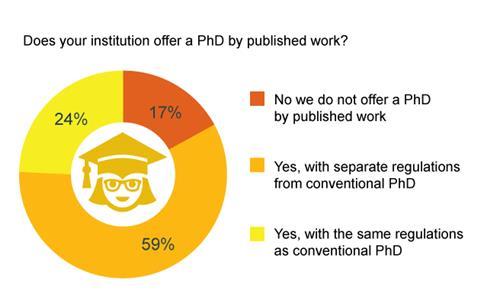 While the integrated thesis may be unusual in the UK, it is not a new thing for UK universities: 83% of the universities surveyed by UKCGE award PhDs by published work, also known as PhDs by prior publication or PhDs by special regulations. The University of Cambridge is thought to have become the first in the UK to offer this option in 1966.

In this model, the researcher - who graduated with an undergraduate degree many years previously and went to work in industrial or government labs - collects together a series of papers they have published and submits them for consideration for a PhD. This is normally at the university from which the researcher gained their first degree, but some universities offer this option to staff members too.

‘Usually, they have to write a conspectus or a critical review where they say what that theme is and how the work has developed and so forth. They have to show that they’ve met the same criteria that the traditional PhD meets,’ explains Christianson. ‘The point is that there’s no prior approval by the institution, they haven’t been working under university supervision.’ The researcher then defends their PhD is the standard viva style.

‘Among the largest of the pros and cons - which of these will depend on your point of view - is the fact that you are not a student while doing a PhD by special regulations,’ explains Laurie Friday, secretary of the degree committee for Cambridge’s chemistry and physics departments. ‘Published works have already (in most cases) been peer reviewed, and so it is more likely to be certain that they already meet the doctoral standard than a thesis written especially for examination.’

PhDs of this type are very much the minority. Friday estimates that, in the last 15 years, she has ‘dealt with 12 applications maximum, compared with about 1000 new PhD students a year across the whole university’. None have been awarded in the chemistry department in the last four years. ‘I think this is not an option for a PhD that folk really seriously consider and most people in the university either have no idea it exists or are unsure what it is all about. Where I have seen it work well is for staff who have somehow missed out on the full-time PhD student option and have then gone on to academic or research posts where they suddenly find they need a PhD and have ample published work to put together for a doctoral examination.’ A spokesperson for the University of Bristol told a similar tale, with no one being awarded a PhD by this route for at least three years.

Although the majority of UK universities do offer a PhD by published work, there are some notable ones with top chemistry departments who do not, including the University of Oxford and Imperial College London.

The role of publications and other artefacts in submissions for the UK PhD, UKCGE, 2015