Steadily increasing numbers of science and engineering (S&E) doctorates granted by US universities, including chemistry PhDs, is raising concerns of a glut. In 2014, US institutions awarded more doctorates than they have in the nearly 60 years since that figure has been tracked by the US National Science Foundation (NSF). The number reached 54,070 in 2014, the NSF announced at the start of April. 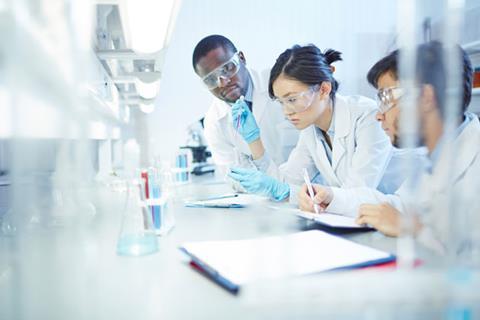 This growth in US chemistry PhDs is less dramatic than in other S&E fields. The number of life sciences doctorates awarded grew by about 60% between 1994 and 2014 to 12,504. Engineering doctorates rose more than 64% over that time to 9568. The trajectory for both was consistently upwards, except for a slight dip from the late 1990s to mid-2000s.

This is a different pattern to the UK, where research institutions awarded about 995 chemistry PhDs in the 1995–96 academic year, and the figure had only risen about 4% by 2014, according to the UK Higher Education Statistics Agency (Hesa). The number rose and fell every few years during that period, dipping as low as 890 in 2007, Hesa’s data show.

Some experts suggest that the precipitous rise in S&E degrees awarded in the US over the least two decades simply reflects demographic changes. ‘Remember that the population is increasing period, and that includes the population of school-aged people,’ says Gregory Petsko, a neuroscience professor at Weill Cornell Medical College who chaired a 2014 National Academies panel on US postdoctoral training. ‘Absolute numbers can be misleading because those numbers are going up, but so is the number of people in that particular age group,’ he says.

The US population increased about 21% between 1994 and 2014, rising from about 263 million to just under 319 million, according to the US Census Bureau.

‘The number of  these PhD graduates, just based on the raw numbers, is definitely outpacing the overall increase in population as a whole in the US,’ remarks Bryan Balazs from Lawrence Livermore National Lab, who sits on the American Chemical Society’s employment task force currently examining the job prospects of chemistry graduates.

In fact, the NSF analysis reveals that the number of S&E doctorates awarded by US research institutions follows a 40-year trend of outpacing other doctorates. In 1974, S&E degrees comprised 58% of the total, but by 2014 they were 75%.

The concern is whether the US job market can absorb all these newly minted S&E doctorates. ‘If the supply of those people is increasing, and the job positions are not at the same rate increasing, then there is going to be a mismatch in terms of the supply and demand,’ Balazs says.

The job market for chemists is traditionally cyclical, and these sorts of imbalances have occurred from time to time, but the current situation is ‘more severe and longer-lasting’ than in the past, he states.

Experts believe that this is due to a confluence of events, including the recession of 2008 that led more people to pursue an advanced degree in a depressed job market, the fact that industries are outsourcing to drive down labour costs and more restrictive US labour laws. Added to this many professors are staying active in research much longer and not retiring, while universities, particularly those with science, technology, engineering and mathematics departments, are under pressure to cut costs.

Bassam Shakhashiri, a chemistry professor at the University of Wisconsin and past president of the American Chemical Society, agrees that employment prospects for chemistry PhDs are ‘a big concern’, because the job market has changed considerably. ‘There are more PhDs being produced along the lines of what the needs were in the 20th century,’ he says.

Industry hiring has changed now, Shakhashiri adds. He notes that DuPont has shut its Central R&D unit, which was described as one of the world’s key chemistry research organisations. The historic Bell Labs have closed too.

Shakhashiri says that universities should be careful and deliberate in their efforts to recruit students to doctoral programmes. ‘Otherwise, they come and they do their research, the [principal investigator] gets their grant renewed and students get their PhDs and they don’t have jobs,’ he warns.

Although postdoctoral positions have typically been part of the early career paths of scientists, the NSF analysis indicates that the proportion of doctorate recipients taking postdoc positions in the US fell in 2014 in the physical sciences and engineering, and the proportion increased only slightly in life sciences and non-S&E fields.

In 2014, only around half of chemistry graduates had a job of some kind lined up for that year. The lion’s share of these new chemistry PhDs – 712 – had signed on for postdoc positions, and 316 had landed industry jobs. Academic posts awaited only 127 of these individuals – less than 10%, and another 136 were accepting employment abroad.

Many observers note that there is no reason why chemistry graduates have to work as chemists. ‘There are tons of jobs, they are not all in chemistry, but so what,’ says Petsko. ‘Why are we automatically assuming that someone who has a PhD in chemistry must use it to do chemistry?’

Petsko and others emphasise that graduate degrees in chemistry and other S&E fields offer excellent preparation for dozens of different careers. Such training teaches people how to think creatively, design projects and experiments, work in teams and extract and analyse data, they argue.

‘The notion that there have to be jobs in chemistry for all of these people is a mistake,’ Petsko adds, noting that S&E graduates are ‘good for society, period’. However, he adds one caveat: ‘We just have to make it clear to them that most of them aren’t going to become academic scientists.’

The NSF report also concluded that temporary visa holders earning doctorates have become increasingly likely to stay in the US following graduation over the past 20 years. In 1994, more than half of doctorate recipients holding temporary visas reported having found employment or secured a postdoc in the US; by 2014 the ‘stay rate’ had risen to three-quarters.

These stay rates are highest in fields where temporary visa holders are most prevalent, like the physical sciences, engineering and the life sciences. By contrast, over that same time the stay rates for non-S&E fields have stayed stable at about 20 percentage points below the rates of S&E graduates.

By comparison, the UK data from Hesa shows that about 30% of the 1030 chemistry doctorates awarded by UK higher education institutions in 2004–2005 went to non-UK residents. For the 2014–15 academic year that figure was approximately 35%.

‘Principal investigators have a lot of vested interest in pursuing difficult scientific research projects. They need people to work with them on those projects, and if they are not coming through domestically then there has been an increase in having people from overseas,’ Shakhashiri tells Chemistry World.

Overall, the new NSF data on graduate degrees contradicts frequent assertions about the failure of the US education system to provide adequate training in S&E disciplines. ‘These sorts of numbers suggest that, in fact, we are producing increasing numbers of people who are educated in science and technology related subjects – that’s a good thing,’ Petsko states. However, where these people will choose to work and live will have profound implications on the US’s scientific enterprise, and its global competiveness.