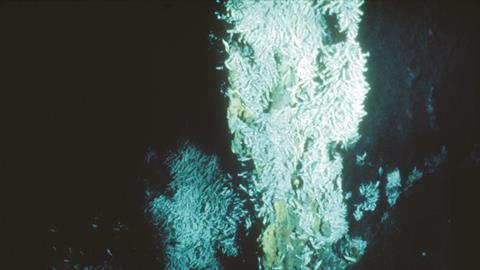 On the floor of the world

Susan Humphris and the chemistry of the ocean’s hydrothermal vents

Swirling and swishing at the bottom of the ocean is the world’s coolest chemistry lab. It doesn’t have any Bunsen burners, test tubes or condensers. Instead, you will witness a churning concoction of chemicals as hot, metal-rich fluids emerge from undersea vents and mix with the frigid water. Here, in perpetual darkness, you will find copper- and zinc-rich mineral deposits on the seafloor, as well as extensive nurseries for and graveyards of creatures that depend on the chemicals in the discharging fluids from these rips in the basement rocks for sustenance.

It was in this dark and haunted venue that vent chemist and chemical oceanographer Susan Humphris made her mark on science. In 1986, working at Woods Hole Oceanographic Institution (WHOI) in Massachusetts, US, Humphris participated in a research dive to the bottom of the Atlantic Ocean. She and her colleague were in the submersible Alvin, diving off the research vessel Atlantis, seeking unusual materials on the sea floor. It was an eight-hour affair, including four hours in the lonely marine cellar. 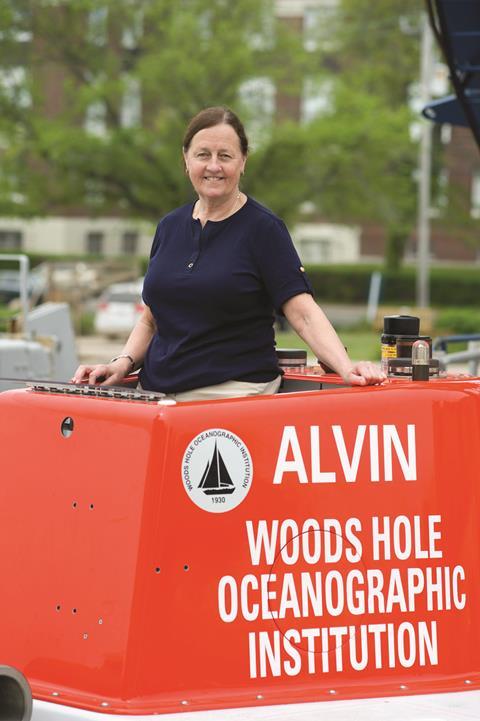 Nobody had ever witnessed hydrothermal vents in the Atlantic, but Humphris knew the signs to seek. ‘As you approach an area of hydrothermal venting, you often see very bright, orange-brown sediments that are an indication of iron precipitating out of a hydrothermal plume. As you get closer, you look for blocks of metal sulfides that are a sure sign you are close to a site of hydrothermal activity’ she says. ‘You also look for evidence of a gradient in biological material, both dead and alive.’ To locate a vent, she explains, you follow the gradient of biological material as it increases as you near an active vent. You also remain on the lookout for fluid discharging from the sea floor.

Humphris was staring out of Alvin’s window when something significant caught her eye. ‘I saw black smoker chimneys that were covered in billions of shrimps,’ she recalls. She searched her mind for an explanation. ‘I remembered what my PhD adviser said – if you see something on the sea floor, don’t just exclaim and say that’s interesting. You have to describe it because you and your team member are the only people seeing it. So I started to describe it into a tape recorder. You need to describe it very clearly even if you don’t know exactly what you were seeing.’

As she dictated her observations, she began to realise what exactly she was looking at: a hydrothermal vent. The discovery changed her as a scientist. ‘Up until that point, my involvement with hydrothermal systems was looking at rocks dredged from the sea floor that were in the WHOI collection to learn how sea water interacted with lava at high temperatures. I was very much involved in hydrothermal circulation studies,’ she says. ‘But going down there and seeing that huge mineral deposit opened up a lot of doors.’

In 1998, Humphris was named a senior scientist in WHOI’s department of geology and geophysics, and served as the first chair of the Deep Ocean Exploration Institute from 2000 to 2004. She also served as the chair of her department. She traces her penchant for ocean matters to her time growing up by the seaside in the UK. ‘I was always interested in chemistry, and I wanted to apply chemistry to some aspect to the environment because I like to be out in the field.’ In her final year studying environmental sciences at the University of Lancaster, Humphris took a course in marine geochemistry and was hooked. ‘When I looked in the textbooks, I saw pictures of ships and submersibles. I said “Wow. This might be an opportunity to the do this type of work”. I fancied the idea of going to sea.’ 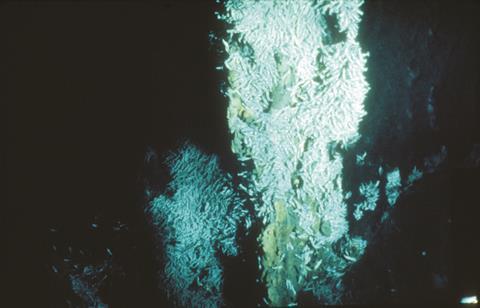 The hydrothermal vent discovered by Susan Humphris in 1986

As a vent chemist, she has participated in more than 30 dives over the years. Since then, the field of vent chemistry and chemical oceanography has changed greatly – when Humphris was a grad student, hydrothermal vents had yet to be discovered. ‘Chemical oceanography used to be going into the field to collect discrete samples and take them to the lab and analyse them,’ she explains. ‘But now we are seeing a shift to analysing some chemical parameters in situ rather than bringing samples back to the lab.’

The advances in technology that drive submersibles and deep sea sample collection has ushered the field of vent chemistry into a new age. It also has required scientists like Humphris to work with engineers and technologists; she herself has contributed to improvements in submersibles, including a major technological upgrade to the Alvin.

Humphris still thinks fondly of the experience when she first came across the hydrothermal vent field in the mid-Atlantic. ‘It was the first time I had been to the bottom of the ocean. It was a huge moment and a real eye opener. It makes me smile,’ she says. ‘From the time I was a PhD student, there had been a lot of discussion about whether hydrothermal vents existed on the sea floor. And when they were found in 1977, they were in the Pacific… when I saw the vents in the Atlantic, and they were much bigger than the ones in the Pacific, I was struck by the thought “Oh my gosh, what else is here that we don’t know about?”’

Ultimately, Humphris appreciates that her career has afforded her an amazing playground to explore. In the next year, she will be headed to a site off the coast of New Zealand called Brothers Volcano. ‘There are fascinating hydrothermal fields that have very different fluid chemistries,’ she says. ‘So we are going to look at how you get two different chemistries in a single caldera.’ She will be using the submersible Jason to measure heat flow patterns and follow up with a drill ship to take the first drill core samples from this area in May 2018.

‘I love going to sea,’ she says. ‘I love being in the field and not knowing what you’re going to find, and knowing that you might be the first person to see something new and exciting.’