Adventures in the Anthropocene: a journey to the heart of the planet we made 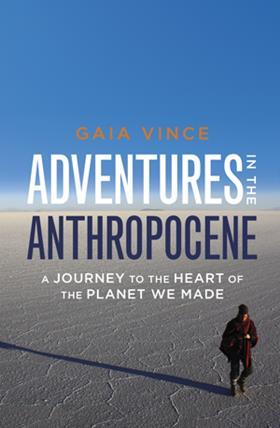 The Holocene epoch began almost 12,000 years ago, after the last ice age. During this time civilisation arose, agriculture was developed, and science was born. To put it briefly, the whole of human history happened. But geologists are reaching a consensus that this epoch has ended and a new one has begun.

In geological history, an epochal change is usually ushered in by a cataclysmic event, such as an asteroid impact or volcanic eruption, but this latest one is due to our actions since the Industrial Revolution. Thus geologists have named this new era the Anthropocene – the age of humans.

Gaia Vince’s new book, Adventures in the Anthropocene: a journey to the heart of the planet we made is not necessarily an attempt to convince its readers that this epochal transformation is occurring – though it probably will. Rather it is an argument that industrialisation has put humans, and all life, in a precarious position: we now face threats from climate change to water shortages, as well as increasing energy and food demands. It shows how the events of the Anthropocene are now affecting people, and how communities are reacting to these threats.

To research this book Vince quit her job, bought a single ticket to Kathmandu, Nepal, and set off on a journey round the world to meet the people being affected. Many of the characters she met are inspiring, such as Norphel, a Nepalese villager who has witnessed glaciers melting in his homeland, but who has responded by building ten artificial ones that provide water to 10,000 people. The book’s personal nature makes it a joy to read.

Added to this is the book’s excellent structure, examining each habitat in turn – sadly none of them are escaping humanity’s impact – and looking at the solutions science might provide. Admirably, Vince does not shy away from discussing controversial solutions such as genetic modification of crops and geo-engineering. Despite being densely filled with meticulously researched facts, it always flows like a good travel journal, and it was a worthy winner of the 2015 Royal Society Winton Prize for Science Books.

Vince does not prescribe answers but rather lays bare the complexity of the decisions humanity must make. She avoids the preachy tone that often pervades books on the environment, inspiring action rather than calling for it. She is clearly optimistic that ingenuity will provide solutions to the problems for which it is partly to blame. Let’s hope she’s right and the Anthropocene doesn’t turn out to be just a thin band at the top of the Holocene, above which the rocks bear no fossils.

If you’d like to find out more about Gaia’s journey and our thoughts on Adventures in the Anthropocene, listen to our book club podcast