Fat chemistry – the science behind obesity 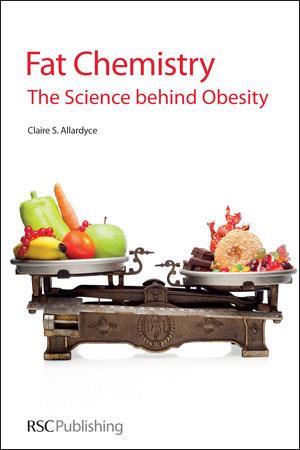 Given the title of this book, I had hoped to get a well rounded explanation of how the increased availability of cheap, tasty, high-caloric density food has led to the obesity epidemic. However, the wide range of topics and the detail in which they are covered, together with the fact that the book is directed at the non-specialist reader, mean that lengthy explanations are necessary, resulting in a lack of focus and clarity.

On the biochemical side, the book starts with the structure of atoms and molecules and moves through to the structure of fats, and the influence of genetics, epigenetics and hormones on obesity; all of this with no diagrams or illustrations, which means descriptions are complex and a tricky read. The book also gives a potted history of nutrition and food production from hunter–gatherers through to the advent of farming and the early production and adulteration of food, finishing with additives and the fortification of foods. Putative causes of the current obesity epidemic are considered, encompassing imbalances in just about every micronutrient, vitamin and food additive. I would have found a more critical and focused review of the science more helpful rather than this scattergun approach.

I had many issues with the portrayal of scientific research in this book, too numerous to detail, both in what was considered relevant and what was not included. One important omission is the lack of a detailed analysis of hypothalamic appetite control. This is a highly developed and sophisticated neuronal system that fails completely in the face of food high in saturated fats and sugars. The breakdown of the regulation of food intake and energy balance in obesity is never really addressed in this book, apart from the regular mention of galanin as an appetite stimulator in the presence of high-fat food. While the role of galanin is an interesting one it should be seen in the broader context of the other neuronal regulators in the development of obesity.

Purchase Fat chemistry – the science behind obesity direct from the RSC. Members will receive a 35% discount.