Generic: the unbranding of modern medicine 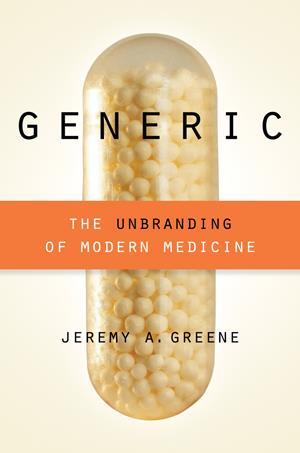 Inexpensive, non-branded ‘generic’ drugs now make up the lion’s share of medicines prescribed all over the world. But this was not always the case. Jeremy Greene’s book documents the evolution of generic drugs in the pharmaceutical marketplace, considering the interplay of scientific, regulatory, legal and political forces that shaped the path to modern healthcare systems. The book focuses primarily on the US, but by necessity takes a global view in parts and makes comparisons with other countries.

In the early days of the pharmaceutical industry, many firms sold products drawn from the same stable of natural extracts and synthesised chemicals. These companies used their brand names as a mark of quality to distinguish themselves from sellers of ‘patent remedies’ and snake-oil ‘miracle cures’. As companies discovered new drugs, and their rivals tried to copy them, a cacophony of nomenclature erupted. For physicians and pharmacists (and even the marketing departments within companies), there was an issue of how to distinguish one firm’s version of a drug from another.

This was the birth of the regulatory sciences of proving similarity and difference. Is it enough to simply have the same dose of an active ingredient? How much effect do the various binders, fillers, coatings and processing techniques have on the chemistry and biology of a drug? And do those chemical differences translate into meaningful differences in clinical use?

Regulators, lawmakers and companies – both those seeking to protect their branded products and those aiming to compete with their own generic versions – have grappled with these issues for decades. They still are, particularly when it comes to the prospect of generic biological drugs. Those negotiations have led to today’s regulatory frameworks for establishing similarity and difference, as well as an intellectual property landscape that tries to balance rewarding companies for researching and developing new drugs (by granting temporary exclusivity through patents) with encouraging generic competition to lower prices and derive value for money for patients.

This book is arranged into chapters by topic, covering different challenges from the scientific to the legal, political and societal implications of generic medicine. While helpful in terms of making a coherent story, the content of the chapters overlaps chronologically and it can be tricky to keep track of where events in one chapter fit with other chapters. A timeline with significant events might have been a useful addition.

Greene makes reference to a variety of sources – including direct correspondence between companies, politicians, regulators and campaigners; advertising materials; and scholarly literature – to bring to life a tangled web of competing interests. These sources are comprehensively listed in a 60-page ‘notes’ section for anyone wishing to pursue the topic further.

Overall the book is well written and informative. I have learned a lot about the evolution of the pharmaceutical industry and the US healthcare system from reading it – most of which has made me even more glad that I live in the UK!

Purchase Generic: the unbranding of modern medicine from Amazon.co.uk