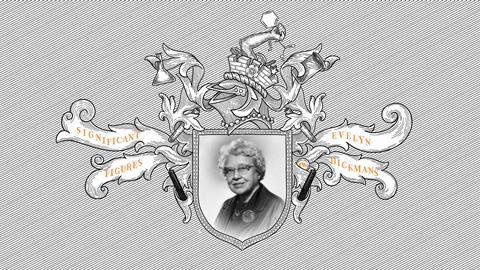 The lifesaving work of Evelyn Hickmans

In 1951 a ‘chemically home-made’ mixture of amino acids changed the course of the lives for thousands of children with a previously untreatable and devastating disorder, phenylketonuria (PKU). This remarkable achievement, to produce a dietary protein substitute, was undertaken at Birmingham Children’s Hospital in the UK by two medical doctors and a female biochemist, Evelyn Hickmans. It was Hickmans’ laboratory, the first of its kind in England, and her expertise, both as a chemist and nutritionist, that made this previously impossible task a reality and a world’s first. From a humble working-class background in England’s industrial Midlands, she pursued a long career that took her from Wolverhampton to Birmingham, London and Toronto before returning to Birmingham. For over 30 years, she combined the application of chemistry and nutrition for the benefit of children. Her work has been largely lost in the successes which have followed and in charting her journey we should celebrate her as one of the pioneer women in science.

Hickmans, born 1882, spent her early years in Coseley, a mining village in Staffordshire’s Black Country. Her father was a schoolteacher, her mother had a grocery business and she had a younger brother and two step-sisters. From these roots, a determination to pursue science and a keen interest in chemistry was ignited. She studied at the forerunner of the Technical College in Wolverhampton (now the University of Wolverhampton), where in 1902 she was ‘top student’ and obtained a scholarship to the University of Birmingham to study chemistry. She was one of only two women to graduate with a BSc in 1905 and she followed with an MSc in 1906 and her first publication in 1907. Despite these formidable qualifications there was lack of opportunity for employment with no encouragement for women to work in laboratories.

From a small side-room with a rack of dirty test tubes, Hickmans single-handedly established the first paediatric biochemistry department in the UK

Determined to pursue her career, she left home in 1908 to attend a newly established course at King’s College, London. This was the beginning of the household science movement, which was considered a more acceptable subject for girls, rather than academic chemistry. The course provided training for a variety of ‘more useful’ domestic roles with the prospect of opportunities in teaching, food science – and marriage. In 1909 she nailed her colours to the mast in a petition supporting the right of women to be admitted to the Chemical Society – although this was never to be for Hickmans. In 1911 with her diploma from King’s there was still no job, but – delayed by the first world war – she left England in 1919 to take up a lecturer post in household science at Toronto University. She provided chemistry input and in return learnt more about nutrition and dietetics. Little did she know how important this combination would become for her future work in the UK.

Her mother’s death precipitated her return home in 1922. While a blow for Hickmans, her cousin, Leonard Parsons, couldn’t believe his luck and said his prayers had been answered. A paediatrician, he wanted to use chemical analyses to add a new dimension to his research into malnutrition in children and he asked Hickmans to set up a chemistry laboratory at Birmingham Children’s Hospital. She reputedly started work the following day – initially unpaid – in a small side room with only a few beakers and a rack of dirty test tubes. From here, she single-handedly set forth to establish the first paediatric biochemistry department in the country. In her words: ‘I did not know one thing about blood chemistry except theoretical,’ and recounted that on day one Parsons arrived with a blood specimen demanding a glucose test, to which she retorted ‘I will do it if you can show me how!’ Undeterred and self-taught she rapidly mastered the practical aspects of biological specimens and established a range of chemical assays for substances including calcium, chlorides, fats and proteins.

Her research had a strong nutritional basis, reflecting the poverty and poor diets in a large inner city, and gained her second MSc in biochemistry in 1923 and a PhD in 1925. By the early 1930s she had staff, including two female graduates of Birmingham, and was an exemplar of the often-forgotten role of women chemists in the early 20th century. By now Hickmans had been awarded numerous Medical Research Council grants to understand the effects of diets and malnutrition. She bred colonies of rats with vitamin D deficiency and after taking them to live in gardens in different parts of the city showed that those with more sunlight responded better. Her work continued through the second world war and in the late 1940s, Horst Bickel, a young German doctor, joined her lab to undertake his PhD. Together they fine-tuned amino acid chromatography, which would prove pivotal in her greatest achievement a few years later.

In 1951 a two-year-old girl presented with developmental delay; she could not stand and had no speech. The rare condition PKU – an inherited inability to metabolise the amino acid phenylalanine – was diagnosed in Hickmans’ lab. There was an estimated 1600 untreated people with PKU, referred to as mental defectives, being cared for in asylums in England. After relentless pressure from the mother to find a treatment for her daughter, it was Hickmans and her medical colleagues who demonstrated how this could be achieved.

Dr Hickmans is worth 50 of us

Although the idea of a diet without phenylalanine was not new, others had thought it impossible in practice. But with Hickmans’ expert chemical knowledge combined with an understanding of nutrition and practical dietetics, her laboratory produced a chemically modified amino acid mixture as the basis of a diet. They became as black as coal miners as they used a charcoal column to remove the aromatic amino acids from a casein hydrolysate to create a phenylalanine-free mixture as the protein source for the diet. No eggs, meat or fish, just this disgusting, foul-tasting chemical mixture twice each day for the little girl. The laboratory continued to make the mixture for many months and, using specialist tests, demonstrated to the world that that it was possible to treat PKU. The subsequent commercial manufacture of a dietary product and new-born screening rapidly followed so that those with PKU could lead normal lives.

Hickmans was at the end of her career and too late for her to benefit from the accolades which eventually were forthcoming for this work. Her medical colleagues, Bickel and John Gerrard, went on to receive their justly deserved recognition but Hickmans was now retired. It was not until 1962 that she and her colleagues received international acclaim for this remarkable work with the John Scott Award from the city of Philadelphia. Gerrard, in a celebratory speech at the University of Birmingham, said ‘both Horst and I are in full agreement that Dr Hickmans is worth 50 of us’. It was recognition that, although the three of them worked together to achieve something that had been felt impossible by others, without Hickmans it would not have happened. Anita MacDonald is consultant dietitian at Birmingham’s Children’s Hospital and treats patients with PKU today. ‘70 years later, the protein substitute is still central to the dietary treatment of PKU and although the taste and presentation may have changed, key elements of its nutritional composition remain to this day.’

Hickmans was decades ahead of her time and this is probably the principle reason why her name is not placed alongside the recognized greats of clinical chemistry – most of whom came much later in the 1950s and 60s when the discipline became established. She was only the second biochemist to work in a hospital setting in the UK – the first in paediatrics –and her early contributions have been largely forgotten. There was no-one ahead of her to promote her achievements and the gender prejudice of the era is also a likely factor. She did not seek fame and was not promoted particularly by those in more influential medical positions. Yet it was Hickmans who in 1949 was instrumental in establishing the Midlands Association of Clinical Biochemists, a forerunner of the national organisation for clinical chemists today.

In her laboratory Hickmans championed other women to follow in her footsteps and played an active role in the formation of the local branch of the British Federation of University Women. In 1950, Tom Day was a young biochemistry student and one of only two men in the department. ‘I was always getting into trouble and I don’t think she liked having “boys”’ in her laboratory,’ he recalls. ‘We were there under sufferance.’ This might not be a fair reflection, bearing in mind it was women who were available during the war as hospital scientists.

When she retired in the mid-1950s, Hickmans had led the way and created an internationally recognised laboratory for paediatric clinical chemistry in Birmingham. The long-term impact of her contribution can be seen in the major role the discipline plays today in understanding diseases in children, including those with inborn errors of metabolism. Her legacy is profound and in an era when scientists working in the medical arena are receiving great accolades, Evelyn Hickmans should be remembered.