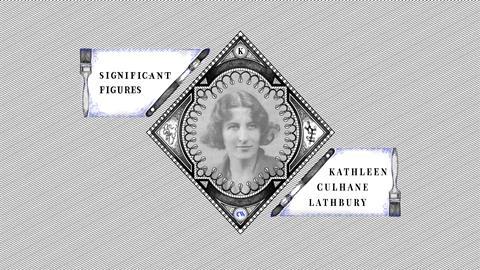 In the early 1920s, things were slowing starting to open up for women’s education in science. ‘Women’s colleges – such as Royal Holloway College and Bedford College in London, Somerville College, Oxford and Newnham College, Cambridge – were crucial in establishing a route by which women could get a chemistry education,’ explains chemistry historian Geoff Rayner-Canham from Memorial University in Canada.

But significant societal barriers hindered any graduate who then wanted to use her education in the chemical industry. In the period running up to the first world war – and even more so during it – scientific roles were becoming more accessible to women. But the barriers went back up again after the war. ‘There was this big slump in women chemists,’ says Geoff Rayner-Canham.

‘There are a lot of different theories about why,’ says Rebecca Kaplan from the Science History Institute in Philadelphia, US. The progress from the mid-19th century onwards until the first world war was thanks to the women’s suffrage movement fighting for their right to vote. But once the right to vote was agreed, the push for equality came to an abrupt halt. The movement ‘falls apart without a common goal’, Kaplan explains, and the expectations of the traditional gender roles returns. This was a global phenomenon. For women in Europe, there was the additional issue of them being ejected from science careers to make way for men returning from the trenches.

Women who did gain access to industrial labs were almost always assigned routine tasks only, with their work overseen by men. ‘The assumption at that time was that women genetically didn’t have the innate ability to do original research,’ explains Geoff Rayner-Canham.

Kathleen Culhane (known as Kay) was one of the few British women chemists of this era who successfully navigated these barriers, establishing herself as a highly respected researcher. She went on to develop analytical techniques vital for both the pharmaceutical and food industries.

But Culhane didn’t initially set out to be a chemist. When she enrolled at Royal Holloway College in 1918, it was onto a botany course. Here, her interest in chemistry blossomed and she switched courses to graduate with an honours degree in chemistry.

Deciding she wanted an industrial research career, Culhane started applying for posts. ‘Kay obtained some interviews by signing her application letter “K” rather than Kathleen,’ her daughter Rosalind Bramley wrote in a 1991 article in Chemistry in Britain. She was turned down for all of these roles once her gender was revealed. ‘Not putting a name, just an initial – so people assumed [the applicant] was male – was a common thing at that time,’ explains Marelene Rayner-Canham, also at Memorial University.

To pay the bills, Culhane taught and coached chemistry students. In her spare time, she worked for free conducting routine emergency blood sugar determinations at the diabetic clinic at what is now the Royal London Hospital. John Marrack headed this lab, and he invited Culhane to join his team after meeting her at the Royal Institute of Chemistry (a predecessor of the Royal Society of Chemistry). This work was at the forefront of medical science with insulin only having been made available as a diabetes treatment in the UK in April 1923 (see One hundred years of insulin).

After two years of unsuccessful job applications, Culhane finally obtained a research post with Neocellon, a manufacturer of lacquers and enamels. Here, she helped developed durable, coloured enamels for gas-filled electric lightbulbs. For once, being a woman actually worked in Culhane’s favour when applying for this job. ‘The company honestly admitted to being unable to afford to pay a man and gave her £120 p.a.,’ Bramley wrote in her Chemistry in Britain article.

I was expected to do all the boring, routine jobs while anything interesting was handed out to one of the men

Marrack soon enticed Culhane back to the hospital with a salary of £265 per year (equivalent to around £47,000 today). She returned to blood testing and was also a general chemical advisor to her department. Marrack then pulled a favour with a friend to secure Culhane a role in the physiological department at British Drug Houses (BDH). This was a large pharmaceutical and chemical company and was a major UK manufacturer of insulin. At first, Culhane thought her appointment here meant her struggles to establish her research career were finally over.

But this wasn’t the case, as a later talk about her career revealed. ‘I gradually discovered that it was not the intention to employ me as a chemist but as a woman chemist … I was expected to do all the boring, routine jobs … while anything interesting was handed out to one of the men.’ She also noted other differences in the way she was treated. ‘The male graduate … is paid a reasonable salary, however young. If his university qualifications are good, he is usually given quite a dignified position from the beginning. The girl who worked side-by-side with him at university is hard up and constantly humiliated [and must work her way up from the bottom rung].’

Culhane’s role was to conduct quality checks of the insulin at various stages during the manufacturing process. Little was known about the chemical composition of insulin at that time, so she used a biological assay – monitoring the blood sugar in rabbits dosed with insulin.

Still determined to conduct original research, Culhane did so after hours. She rapidly found success and was granted permission to publish over a dozen papers during her time at BDH. As her publications mounted up, her reputation outside of the UK grew. In 1928, Culhane took part in a tour arranged by the Society of Chemical Industry to US and Canadian chemical societies. That same year she also joined the League of Nations health organisation committee.

With the committee, she participated in a comparison between the biological activity of crystalline and amorphous insulin. Samples were assayed independently by the four committee members, with Culhane obtaining findings that didn’t match those of her male peers. She was asked to withdraw her results but refused – and her results were later proven to be accurate. ‘Kay received a private congratulatory letter from [one of the committee members], but no public retraction,’ explained Bramley in her Chemistry in Britain article.

Culhane conducted original research after hours, publishing over a dozen papers. In 1928, she joined the League of Nations health organisation committee. With the committee, she participated in a comparison between the biological activity of crystalline and amorphous insulin. Samples were assayed independently by the four committee members, with Culhane obtaining findings that didn’t match those of her male peers. She was asked to withdraw her results but refused – and her results were later proven to be accurate. ‘Kay received a private congratulatory letter from [one of the committee members], but no public retraction,’ explained Bramley in her Chemistry in Britain article.

Culhane developed improved biological assays for vitamins and gave a lecture in Manchester on the need to standardise the process of adding vitamins to foods. Scurvy, rickets and other diseases caused by vitamin deficiencies were common at that time and it was starting to be realised that processed food was being stripped of nutrients during manufacturing.

Her inexperienced male successor began on a salary of £100 more than she had finished on!

The lecture was attended by a journalist from a Manchester newspaper, the Daily Dispatch. He described Culhane as ‘the girl Pied Piper of science … a pretty girl with blue eyes and bobbed hair’ and was incredulous that she was ‘a responsible official in the research department of a famous British drugs firm’. It isn’t known how Culhane responded to this incident, but Bramley wrote in 1991 about her mother’s dealings with a different newspaper reporter. ‘She was asked whether she thought that women were as good at scientific research as men,’ said Bramley. The curt response was that she couldn’t see how ‘a person’s qualifications as a chemist are in any way affected by the accident of sex’.

In July 1933, Culhane married George Lathbury. At that time, women were expected to stop working once married. She was permitted to stay in her role, due to the importance of her research, but was incensed that this was up for discussion. She continued to be invited onto committees once married, to publish work on vitamin assays and standardisation, and was awarded a fellowship at the Royal Institute of Chemistry. In 1936, however, she left her BDH when she was pregnant with Bramley. ‘Her inexperienced male successor began on a salary of £100 more than she had finished on!’ Bramley wrote in her article.

At the start of the second world war in 1939, Lathbury set about finding a way to contribute to the war effort. But although it was frequently publically stated that industry was short of scientists, none of the positions were open to women. Persistence saw Lathbury appointed as the head of the statistical quality control department at an ordnance factory. Her male counterparts at other ordnance factories earned more than double her salary and were permitted to travel first class when travelling to London for conferences – Lathbury went third class. Her competence didn’t go unnoticed, however, and she was made a fellow of the Royal Statistical Society in 1942.

After the war, Lathbury retired from science and threw herself into rural life in Hampshire. In later life, she took up painting and contributed to exhibitions in the local area, London and Paris. She even had a solo exhibition at the Loggia Gallery near Buckingham Palace aged 78. ‘Kay … tackled art in the only way she ever tackled anything – thoroughly,’ explained her daughter.

Lathbury died age 93. Her story deserves to be heard, not just because of her research successes but because her drive and perseverance saw her succeed where so many women of her era did not: to gain acknowledgement and recognition for her scientific excellence in an industrial chemical setting. It’s just a shame she wasn’t paid fairly for it! According the Bramley, however, her mother was not embittered by her experiences as a women scientist in a man’s world. ‘She merely related with incredulous amusement stories of the difficulties and indignities that had dogged her efforts,’ she wrote.