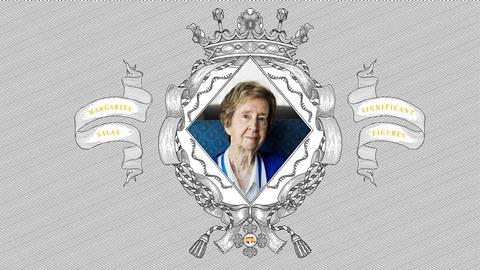 Young women growing up in Francoist Spain had zero job prospects. Under the permiso marital (marital permission), part of Franco’s ‘Charter of the Spanish’ enacted in 1945, women were forbidden from working without consent from their husbands. But this never deterred Margarita Salas.

Born in 1938, just months before Francisco Franco seized power, Salas was remarkable both for what she achieved as well as when she achieved it. At a time when a Spanish woman could only aspire to the factory or the workshop, Salas was making breakthroughs in molecular biology. While she did experience prejudice, her determination and work ethic led her to discoveries that would make DNA testing possible on a mass scale, and, through patents, bring in millions of euros for reinvestment in Spanish science.

Salas grew up in Gijón on the northwest coast of Spain. It was here that she first encountered the eminent biochemist Severo Ochoa, who became an inspiration and mentor. Despite living under the fascist regime, Salas was lucky enough to have parents who insisted on sending her and her sister to university, and who had connections in science. She studied chemistry at the University of Madrid and, while home for the summer, met Ochoa, who came to eat paella at her parents’ house. Despite the labour restrictions, Ochoa wrote her a reference to study for a PhD in biochemistry in Alberto Sols’ lab at the Spanish National Research Council (CSIC) once she graduated. ‘Sols could not refuse a request from Severo Ochoa, even if I was a woman,’ Salas wrote in 2012, referencing the fact that in between their meeting and the request, Ochoa had won the 1959 Nobel prize in physiology and medicine for his work on RNA and DNA synthesis.

Sols was a brilliant scientist but ‘very macho’, says Victoria Toro, communication director at the Association of Women Researchers and Technologists, a non-profit organisation with branches across Spain. He later admitted that he treated Salas differently because she was a woman: addressing comments on her thesis to her boyfriend Eladio Viñuela, who also worked under Sols, rather than talking directly to her, for example.

The sexism continued after she completed her PhD in 1963 and married Viñuela. ‘For many years, Margarita was known among the scientific community as “Eladio’s wife”,’ says Toro. In later life, Salas was heard to complain about this moniker and it probably didn’t help that she continued to work alongside her husband, doing postdoctoral studies with Ochoa at New York University in the US. Ochoa, however, apparently keen for Salas to build her scientific reputation off her own back, encouraged the couple to follow different lines of enquiry. Salas worked on the fundamental processes involved in reading the DNA code and translating it into proteins, whilst Viñuela studied replication in a virus that infects bacteria called MS2.

In her first project, Salas uncovered one of the basic principles of biochemistry: that the RNA carrying the DNA message – messenger RNA (mRNA) – is read in the 5’ to the 3’ direction (from the N- to the C-terminal) rather than the opposite way.1 In the three years she spent with Ochoa, she also identified factors required to start protein synthesis. As Miguel De Vega, a long-standing co-worker at CSIC, notes: ‘Those achievements are currently in all the textbooks of biochemistry and molecular biology.’

The initial project used cell machinery from bacteria and short stretches of chemically constructed RNA. But in the later work on protein synthesis, Salas and Viñuela’s efforts gravitated together, as they employed natural RNA from Viñuela’s MS2 virus, yielding a joint publication in 1967. That same year, they moved back to their native Spain, working again on viruses that infect bacteria – known as bacteriophages or simply phages. Together, they began a project on a small DNA phage called Phi29, as a simple model for viral replication. This decision would define her career.

Because there was no funding available from their own country at that time, they applied for and won a grant from a US medical research fund. According to De Vega, Salas was ‘very intuitive when it came to choosing her research topic’ and her decision to focus on the seemingly obscure Phi29 virus quickly paid off with publications in leading scientific journals. In 1970, the team’s first Nature paper described one of the host enzymes that Phi29 hijacks to replicate itself inside cells.2 Despite her early success, though, Salas still found herself having to work harder than her male colleagues to prove her worth. ‘At that time, the scientific work of women was very little appreciated,’ she wrote.

Soon after, Viñuela made the decision to step away from their collaboration, partly to pursue an interest in African swine fever virus, which was wreaking havoc in European pig farms, but also to allow Salas to shine independently. Meanwhile, Franco’s reign was coming to an end and in November 1975, the ageing dictator died of heart failure. Juan Carlos was immediately declared king of Spain – and would in due course award Salas the hereditary title of marquise. By the end of the decade Spanish women, in law at least, were considered equal to men, as the permiso marital and other relics of the Franco era were dismantled.

The Phi29 team were by now installed in the Center of Molecular Biology ‘Severo Ochoa’, named for Salas’ mentor, at the Autonomous University of Madrid. Here, during the 1980s, they made some of their most important breakthroughs – breakthroughs that would impact not just on basic molecular biology but on genomics, forensics, oncology and epidemiology. For De Vega, who worked with Salas for 27 years, it was no surprise that Salas became so successful, given her qualities: ‘Margarita met absolutely all the requirements … she was intelligent, a tireless worker, tenacious … and ambitious,’ he says.

Perhaps their single most important discovery was that of the phage enzyme, Phi29 DNA polymerase, which is responsible for replicating Phi29 DNA.3 Unlike enzymes that build DNA molecules in other organisms, this one binds to its template, sticks like glue and processes at speed through thousands of nucleotides without dissociating, while making hardly any mistakes. Based on this discovery, they pioneered fast techniques that could be used to amplify small amounts of DNA for testing. Along with De Vega, Salas also designed and patented other polymerases with improved abilities to amplify DNA.

Salas patented Phi29 DNA polymerase and its applications in the US in 1991 and in Europe in 1997. The European patent brought in half of all royalties received by CSIC between 2003 and 2009, when it expired. From De Vega’s perspective, ‘This [polymerase] is one of the best examples of how basic research is absolutely required to develop further unforeseen biotechnological applications.’

In the last years of her life, she constantly went to schools and colleges

It was ‘totally unexpected’ for any basic research lab in Spain to have such a broad impact during this time, says Modesto Redrejo Rodriguez, who joined Salas’ group in 2011. ‘Many DNA amplification methods from labs and companies throughout the world have been developed based on engineered Phi29 DNA [polymerase].’

Rodriguez met Salas in 2003, while doing his PhD on DNA repair mechanisms in African Swine Fever Virus. Well aware of her scientific might, he eagerly accepted an invitation to work with her at a time when science funding in Spain was in crisis. While many scientists in the country were quitting their jobs, Salas was still bringing in money through meticulously put together grant proposals. He remembers her as a perfectionist – just working with her ‘one felt the responsibility’ – but also as someone who would listen and encourage others to pursue their own ideas. De Vega agrees: after explaining what he had in mind, ‘she used to smile shyly and say “If you are clear about it, then do it”.’

Despite her natural shyness, Salas felt it was her duty to be a role model. She also became dedicated to calling out discrimination against women in science. According to Toro, she was not always aware that she experienced prejudice in the science lab – that some of the things that happened to her happened because she was a woman. ‘But once she was aware … a constant struggle began in order to vindicate the role of women in science,’ she says. ‘Whenever she could, she would talk about it. In the last years of her life, she constantly went to schools, colleges and especially classes for very young kids.’

Her last years were also fruitful ones scientifically. She never tired of going to work at the Severo Ochoa centre, even at over 80, and said she wanted to ‘die with her lab coat on’. Rodriguez is still waiting for a patent based on novel DNA polymerases that they worked on together and her last paper co-authored with De Vega was accepted just days before her death in 2019. De Vega still catches himself looking to see if her office light is on.

Within Spain, Salas’ name is recognisable and appears on streets, schools and buildings. Through her Phi29 lab family, her legacy continues to spread, as many ‘Margaritos’ have gone on to be outstanding scientific leaders in Spain and abroad. But internationally, her achievements receive less recognition than perhaps they deserve. And as a scientist, says Rodriquez, Salas should be considered ‘a reference for what kind of scientist we wish to be’.