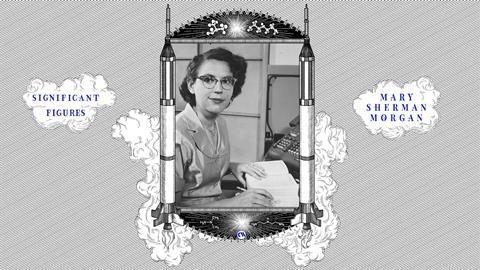 Anna Demming reveals the scientist who invented the fuel that powered the first US satellite into orbit, yet died with barely a trace on record of her achievements

On 4 October 1957 the Soviet Union launched Sputnik. The world’s first ever satellite orbited the Earth for 21 days, singing its success with a beeping signal that anyone on the planet could tune into. Within less than a month Sputnik 2 launched, further extending the Soviets’ lead on the rest of the world in aerospace technology. For the US, meanwhile, orbital space rockets remained out of reach – their rocket technology programme had been primarily focused on military missiles.

Sputnik proved so significant in the parading of technological might during the cold war that many felt the US’s reputation as a technological superpower would never recover. When the US Explorer 1 successfully soared into orbit on 31 January 1958, it was the success story the country needed, salvaging the credibility of US science and engineering and giving it a footing in the space race. Yet the woman who invented the rocket fuel hydyne, which gave the converted missile the extra power needed to reach orbit, remains shrouded in obscurity.

Mary Sherman Morgan’s family would remember her as a ‘homebody’, rooted to the dining room table, often mumbling to herself irritably, with a coffee, cigarette, deck of cards for solitaire and an outdoor lifestyle magazine – often the inspiration for the next annual camping holiday. She was always sharp, but rewind to the days before her retirement ‘to raise a family’ and Morgan’s story reveals a tenacity of intellect and brilliance of mind that helped elevate US aerospace aspirations to new heights.

She intentionally eschewed the fame she could have had, calling security when a reporter showed up

Morgan was born to a large and impoverished farming household in Ray, North Dakota. Her days were buried in household and farmyard chores, so much so that her parents did not send her to school until she was nine years old, by which time social services had arrived threatening her parents with arrest. Thriving in education, Morgan secured a scholarship to a modest college in Sandusky, Ohio, to read chemistry, but as pressures to contribute to the war effort and resolve her own dissolving finances mounted, she left her degree uncompleted to work at a nearby weapons plant. As a result, when she joined Rocketdyne (then North American Aviation) after the war, she was dealing with not only the prejudices against her as a woman, but also as the only person working in their engineering department without a college degree. Nonetheless, it was there that she invented hydyne, achieved within almost impossible working constraints. She had been tasked to develop a more powerful propellant that would give extra power to the US Army’s Redstone rocket engine but without changing any aspect of the engine’s design.

‘I think that was quite an achievement,’ says Brian Cantwell, an engineering professor at Stanford University in the US, whose work in rocket research ranges from testing the lunar module ascent engine for the Apollo mission back in the 1960s to pioneering a competitive hybrid solid–liquid rocket propellant currently in testing with scientists at Nasa. ‘I think her big accomplishment with this hydyne was to figure out how to keep the density comparable,’ Cantwell tells Chemistry World, listing several other chemical requirements the fuel had to meet while increasing the specific impulse with which it boosted the rocket. He highlights the issue of managing temperature, which was a greater challenge in the 1950s when rockets were built primarily from steel and consequently more prone to burning than today’s high-temperature nickel alloys and accompanying sophisticated cooling systems. The engine Morgan was tasked to get into orbit was ‘regeneratively cooled’ by circulating the fuel over the engine and nozzle, so the fuel needed to be an effective coolant as well.

In view of all the interlocking requirements, rockets and their propellants are generally designed in tandem. So why was Morgan ‘set up to fail’ as her colleagues would have seen it by being commissioned to retrofit a fuel to a rocket that would not only meet operational requirements but improve the rocket’s performance?

The US had already landed a significant asset in rocket science in Werner von Braun. Von Braun had been responsible for developing V2 missiles capable of covering distances of over 300km for the Nazis during the second world war. His expertise put him in a vulnerable position at the end of the war, when the Nazis were keen to obliterate any intelligence that could pose an advantage to the enemy. To his good fortune the US recognized his value and set him to work on extending the performance of their missile technology. Since boyhood von Braun had harboured dreams of conquering space and his best chance for reaching orbit was his Jupiter C rocket with its A-7 engine, adapted from the V2. The engine ran on a mixture of ethanol and water as the fuel and liquid oxygen (known as lox) as the oxidizer, but although powerful, even the expertise of von Braun and his team could only get enough specific impulse from the engine propellant to get it 93.1% of the way to orbit. Although focused on arms applications the US military were sufficiently interested to turn to North American Aviation, where Morgan’s reputation for complex theoretical calculations landed her the ‘poisoned chalice’ of finding a better propellant for the rocket. Following the launch of Sputnik, the urgency of the commission intensified.

Although Cantwell describes the task she had been set as ‘quite a search through all the available propellants’, he adds that the list of available fuels and oxidizers was (and is) quite limited. Little has changed in rocket propellants over the past 60 years since the early space missions – other than a push towards more ‘green’ technology – and the chemistry of the propellants has not changed. Morgan focused her attention on the fuel side, a strategy that may have been against the recommendation of her supervisor, although he was nonetheless happy to take the credit when she hit on the winning combination.

It soon became clear that there was no ‘off-the-shelf’ fuel that would work alongside the liquid oxygen to give the A-7 more power, so Morgan started looking for compounds she could mix with unsymmetrical dimethyl hydrazine (UDMH) to increase both its density as well as its performance. Pure hydrazine is a nitrogen-based fuel that packs a powerful punch but is limited by its relatively high freezing point at around 2°C. Conveniently for Morgan, the Soviets had already devised UH with comparable power but a lower freezing point. However, the density would not work with the fuel tank capacity of the A-7. Morgan hit on diethylenetriamine (DETA), which is miscible with UDMH but has a higher density. Morgan had the quirky notion of naming the star performing 60:40 mix of UDMH and DETA ‘bagel’ so the propellant would be known as ‘bagel and lox’, the more sober-minded military overruled and named it hydyne.

The press coverage of Explorer 1 from the time is rich with photographs of von Braun, who was widely celebrated as the inventor of the rocket that launched the first US satellite. But although his rocket would never have got there without Morgan’s fuel, even among aerospace specialists, almost no-one has heard of her. Part of that might be down to the confidentiality surrounding the project. The secrecy of the second world war carried over to the cold war in the 1950s, as tensions mounted and the culture of McCarthyism heightened fears. Yet that hardly dimmed the limelight around von Braun’s contributions.

As many who knew her testify, Morgan guarded her privacy vehemently. ‘She intentionally eschewed the fame she could have had, calling security at her job when a Life magazine reporter showed up after the Explorer I success to interview her for a feature article on her accomplishment,’ recalls her son and biographer George Morgan, who has been on a mission since his mother’s death in 2004 to undo her disappearing act from the annals of history. His stage play Rocket Girl about his mother’s life premiered at Caltech in 2008 and his biography of her was published in 2013.

Engineers are nobodies in the eyes of the media

Despite his own enthusiasm for rockets as a boy he remained in the dark over his mother’s accomplishments until around the age of 14 when his father (who had also worked at North American Aviation) slipped an offhand comment into conversation. ‘You know, your mother invented the rocket fuel that launched America’s first satellite, right?’ he recalls his father saying. In fact, his mother was so good at keeping secrets from her children that it was not until long after her death that news emerged they had a half-sister born out of wedlock during the war. Thanks to Morgan’s secrecy and the dismal record keeping at North American Aviation, when George D Morgan submitted an obituary to the Los Angeles Times, they refused to print it. There simply wasn’t enough documentation to back up the claims.

There was also the obvious issue of gender prejudices at the time (who would want to attribute America’s space glory to a woman?), but George Morgan cites a fourth contributing factor. ‘The space age stories mostly revolve around astronauts and a few leaders like Gene Krantz and Wernher von Braun. Engineers are nobodies in the eyes of the media,’ he tells Chemistry World. ‘For example, you know a lot about Elon Musk, but how much do you know about his lead rocket engineer, Tom Mueller?’

Hydyne was not used for future rockets, an omission less remarkable when you consider how knotty is the mesh of extraneous circumstances each rocket project has to meet. Yet its role in the Explorer 1 launch set the stage for a dazzling era of US space missions. As such far from disappearing without a trace Morgan leaves behind a legacy that should inspire generations of girls and boys for years to come.

Anna Demming is a science writer based in Bristol, UK