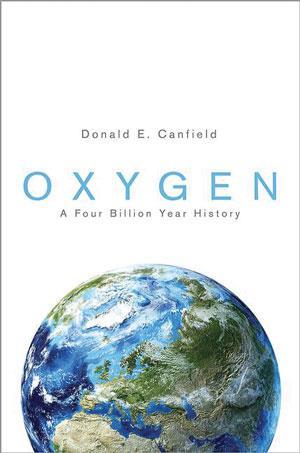 How is it possible to evaluate the processes of atmospheric evolution that occurred across the luxurious expanse of time that is Earth’s four billion years of history? This task is especially difficult when we think of the materials we have to work with: plate tectonics and weathering destroy the sediments that are needed to reconstruct Earth’s chemical evolution, so the further back we go, the more fragmented and altered the record becomes. Donald Canfield navigates this sea of uncertainty and delivers his explanations with a deft hand, bringing us the evidence for oxygen’s history on the Earth’s surface.

As a starting point, he provides a description of the ingredients for life and evidence for an ancient Earth with no atmospheric oxygen. Insights from the biochemistry, ecology and evolution of cyanobacteria (the architects of the oxygen revolution) and possible origins of the photosynthetic process are placed in the context of the cycles of key elements. The co-evolution of the cycles of oxygen, carbon, iron and sulfur are eloquently described and we are led through the various stages of the progressive oxygenation of the atmosphere and oceans. This leads to the debate on oxygen’s role in the critical transition to multicellular life – a possible consequence of the oxygenation process.

Gaps and ambiguities in the evidence are not glossed over, and while much of the big picture is clear, there is a welcome sense of a work in progress and the excitement of discoveries to come.

Given the complexity and breadth of the material, the narrative has a light touch and is scattered with anecdotes about the scientists and adventures involved in the story, giving a real sense of the human endeavour. As well as the fascinating subject matter itself, the overriding impression is one of exhilaration and sheer enjoyment in pursuing this most fundamental, yet challenging, of scientific quests. Highly recommended.