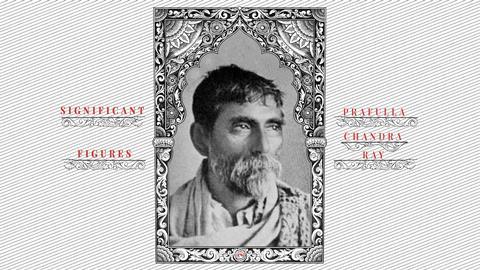 PC Ray: A genius chemist who dreamed of a modern India

When he wasn’t teaching or immersed in research, Prafulla Chandra Ray sometimes sauntered into college hostels and gave his favourite students a pep talk or drew them into a discussion about social issues concerning India, which was suffering under British rule at the time. It may seem like an odd pastime for a chemistry professor, but Ray’s work and public life were shaped by the politically charged times he lived in.

Ray, now regarded as one of the researchers who helped usher in an era of modern science in India, sailed back to his homeland in 1888 after acquiring a doctorate in chemistry from the University of Edinburgh. Around this time, important events leading up to India’s independence in 1947 were just beginning to take place. Even as Ray’s academic career at the Presidency College in Calcutta (now Presidency University in Kolkata) took off, he kept pondering how to exploit his scientific expertise for the greater good. ‘The history of the gigantic progress of industry achieved in Europe and America is a history of the triumph of researches in the laboratory,’ Ray reflected in Life and Experiences of a Bengali Chemist, his two-part autobiography.

When Ray founded Bengal Chemical and Pharmaceutical Works Limited (BCPW), the country’s first drugmaker, in the early 1890s, he hoped it would set a precedent for the youngsters of his home province. ‘In Bengal the one thing needful was not so much the establishment of Technological Institutes as the initiative, the dash, the pluck, the resourcefulness in our youths that go to the making of a businessman or an entrepreneur or a captain of industry,’ Ray lamented in his book. ‘The college-bred youth has been found to be a hopeless failure; there is no driving power in him; at best he can only shine as a tool or as an automaton.’

Ray’s firm, which is now a state-run entity, rolled out a slew of patent medicines, such as Aitken’s Tonic Syrup, Syrup of Hypophosphite of Lime and Tonic Glycerophosphate, to compete with British imports on drugstore shelves. Historians consider BCPW an important example of a movement called Swadeshi (a Hindi word that roughly translates to indigenous), that was launched in 1905 in response to the British government’s decision to partition Bengal into two provinces, widely seen as a divisive political act. As people spilled out on the streets to oppose the move, they also refused to buy British-made goods. The movement, which championed economic self-sufficiency, spurred an entire generation of entrepreneurs to make products locally. And using local raw materials had been top of Ray’s mind when he ventured into manufacturing pharmaceuticals. ‘To a large extent, for him, the matter of being a scientist and also being an entrepreneur was about bringing a strong new country into being,’ according to Benjamin Zachariah, a historian at the University of Trier in Germany.

Ray’s company may have been floated many years before the Swadeshi movement officially kicked off, but Zachariah and others believe that Ray was a pioneer of the movement. ‘But for him, Swadeshi was not this kind of trying to build an abstract indigenous Indian culture; he was interested in science,’ he says, adding that Ray tried not to get too involved in the country’s mainstream politics as he depended on the government for his paycheck.

While he juggled BCPW responsibilities along with university duties, Ray was indefatigable: ‘When work is coupled with a keen sense of enjoyment it does not tell upon your health; the very idea of locally manufacturing pharmaceutical preparations, which hitherto had to be imported, acted like a tonic.’ With the help of Ayurvedic experts, he even produced some traditional medicines. ‘[He] tried to see scientifically which of these were efficacious, and which were just superstition,’ says Zachariah. ’Contrary to the way it’s done today, where a claim is made that the ancient Indians knew better than anybody else, he always made the claim that there’s a lot in the ancient Indian tradition which is just rubbish.’

Ray’s interest in traditional drugs stemmed from an authentic curiosity about the origins of chemistry. A little nudge from the eminent French chemist and science historian Pierre-Eugène-Marcellin Berthelot was sufficient for Ray to write A History of Hindu Chemistry. For the two-part treatise, Ray researched original Sanskrit and Pali texts to trace the evolution of the chemical sciences, as well as alchemy, through India’s earliest periods. It also, Zachariah says, translated scientific concepts in ancient Indian tradition into modern scientific vocabulary. Discussing ancient Indians’ metallurgical prowess, for example, Ray noted no rust had formed on the centuries-old Iron Pillar that continues to attract tourists in New Delhi.

Terming it a ‘classic’ in a 2014 Indian Journal of History of Science essay, Dhruv Raina, historian and philosopher of science at the Jawaharlal Nehru University in New Delhi, notes that the work equips ’practising Indian chemists with an anchor for their own historical and cultural bearings’. ’It’s one of the first disciplinary histories of science written by an Indian in English,’ explains Raina. The book also identified the socio-cultural reasons that derailed India’s early scientific progress. For example, as the society began to re-organise around caste, the higher castes began to steer clear of artistic as well scientific jobs: ‘The very touch of a corpse, according to Manu, is enough to bring contamination to the sacred person of Brahmin,’ Ray wrote in A History of Hindu Chemistry. ‘Thus we find that shortly after the time of Vagbhata, the handling of a lancet was discouraged and anatomy and surgery fell into disuse and became to all intents and purposes lost sciences to the Hindus.’ There is noticeable remorse and anger in his voice when he writes, ‘Her soil was rendered morally unfit for the birth of a Boyle, a Descartes or a Newton and her very name was all but expunged from the map of the scientific world.’

But Ray’s genius wasn’t just restricted to public engagement – it glowed equally brightly inside the lab. While the inorganic chemist racked up more than 150 papers in international publications through his career, Ray is celebrated for uncovering the chemical intricacies of nitrites, particularly mercurous nitrite that showed up as ‘yellow needles resembling prismatic sulfur’ while he was actually trying to prepare another compound using mercury and nitric acid as part of routine lab work during those days.

Ray bemoaned the absolute absence of mercurous nitrite from any reference literature on chemistry at the time in his 1896 paper in the Journal of the Asiatic Society of Bengal, where he revealed his discovery and described a method for preparing the elusive compound and the analysis that helped him identify it. ‘The discovery of mercurous nitrite opened a new chapter in my life,’ he remarked in the autobiography. Ray was elated because his international contemporaries noticed his work: ‘The appreciative and congratulatory letters from eminent chemists like Roscoe, Divers, Berthelot, Victor Meyer, Volhard and others not only filled me with inspiration but stimulated me to further activity.’

He had a very keen sense of his own public duty

Indeed, Ray and his group continued to tease apart the traits of mercurous nitrite over the next few years, also expanding their investigation to ammonium and alkylammonium nitrites. ‘In general, it got established that as a class nitrites are far more stable than chemists had supposed so far,’ wrote Animesh Chakravorty, an emeritus professor of chemistry at the Indian Association for the Cultivation of Science, in the Indian Journal of History of Science.

Ray may have stumbled across mercurous nitrite by chance, but Rajarshi Ghosh, associate professor of chemistry at the University of Burdwan in West Bengal, India, told Chemistry World it is the ‘brilliance of PC Ray that he didn’t ignore’ that yellow substance, something an ordinary researcher may have easily dismissed: ‘He had a very sharp chemical eye.’

The finding, however, remained controversial for some time. Other researchers couldn’t replicate it, and the compound’s structure remained a mystery. A few years ago, a group of Indian researchers, including Chakravorty, determined its structure using x-ray crystallography.

Throughout his career, Ray cultivated an army of young, brilliant chemists, who took on leadership roles in the scientific community. ‘He initiated a process of the institutionalisation of chemistry research [in India],’ says Raina.’

Ray deeply cared about the next generation and wrote his autobiography with them in mind. ‘This volume is affectionately inscribed in the hope that its perusal may in some measure stimulate them to activities,’ his dedication note stated. ‘There’s a lot of writing where he basically trying to insult people enough so that they realise that they’re just lazy, and they’re not doing anything, and then explaining to them what their own potential was, so that they would actually know what to aim,’ says Zachariah. Many of Ray’s mentees, including the Indian soil scientist Nil Ratan Dhar and astrophysicist Meghnad Saha, did groundbreaking work in their fields.

To help spruce up the chemistry department at the University College of Science, where he went to work after leaving Presidency College in 1916, Ray pledged his entire teaching income for almost 15 years. ‘He had a very keen sense of his own public duty,’ says Zachariah. ‘He felt he had a relatively privileged life. And that, therefore, he had to do to give back something to education, to the less privileged and to an abstraction called the country.’

Had Ray lived just three years longer, he would have been able to experience India as a free, independent country.

Dinsa Sachan is a science writer based in New Delhi, India