The quest for aqua vitae: the history and chemistry of alcohol from antiquity to the Middle Ages

The origin of beer 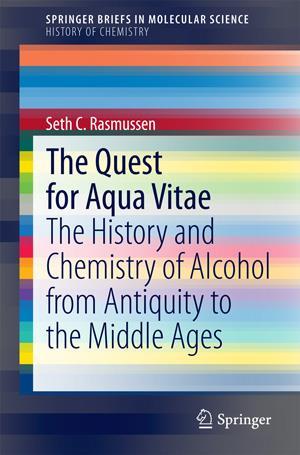 Author Seth Rasmussen is a material chemist and history of chemistry researcher at North Dakota State University, Fargo, US.  His profound knowledge of the subject shines through the pages of this slender volume, which concerns the place of ethanol in the history of mankind up to the Middle Ages. The book covers a wide variety of sources of ethanol, including beer, wine and fermented milk, with accounts of the likely origin of these drinks, and the ways in which they are related.  There is also mention of bread-making, which shares the same essential chemistry as beer-making, though in this case the ethanol is boiled away during the baking process. In addition, there are chapters on distillation and isolation of alcohol and on its chemical and medical uses.

The author has explored a wide variety of recent publications on the origin of alcohol production. He notes that the role of the date palm is somewhat ambiguous – was the product a type of wine or a type of beer? He considers evidence from archaeology, botany, genetics and chemistry in his work, which enables him to make informed judgements on the varieties of cultivated yeasts, and on various aspects of archaeological research. For example, he highlights false assumptions made in the recent discovery of tartaric acid traces in pottery jars, which has been taken as evidence of early wine-making in Ancient Egypt.

The book is well written, extensively referenced, and covers a range of scholarly material on ethanol production from several disciplines. The result is a convincing and erudite study of the early history of this most attractive of compounds, and one that I recommend highly for all chemists and their libraries.

Purchase The quest for aqua vitae: the history and chemistry of alcohol from antiquity to the Middle Ages from Amazon.co.uk