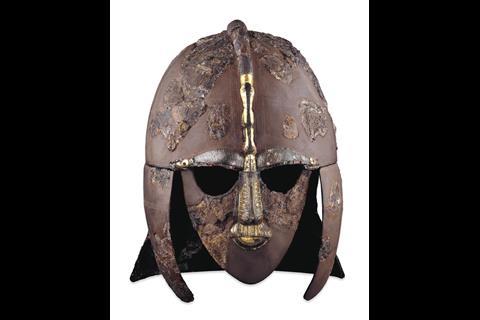 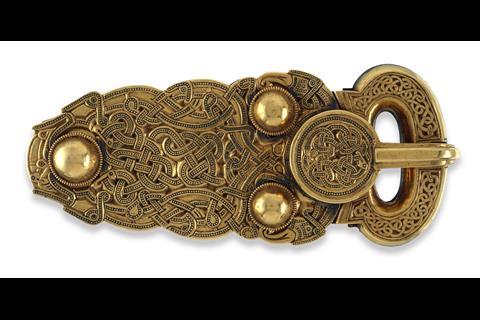 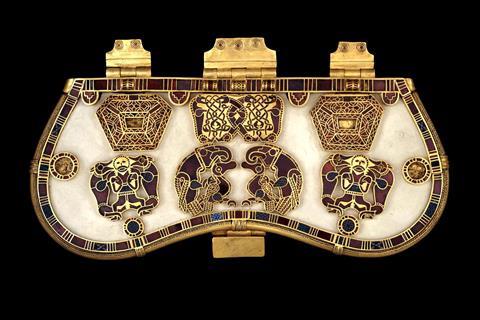 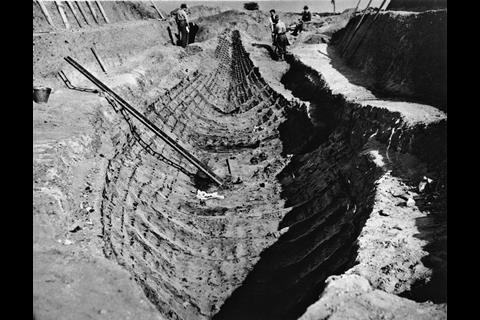 Photograph of the Sutton Hoo ship excavation taken in 1939 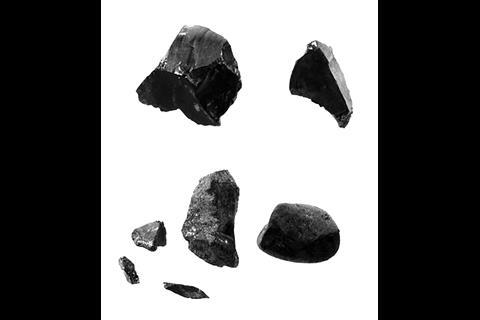 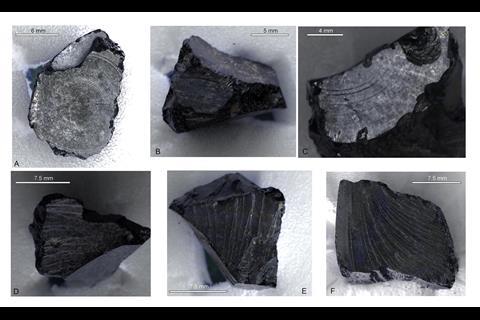 Images of surface morphology of tarry fragments from the burial site. Top images (A, B and C) show concentric rings suggestive of working or worked imprints; bottom images show natural fracture surface on the same fragments (D and E) and on a reference specimen of bitumen (F)

Bitumen discovered among the artefacts at the 7th century ship-burial site Sutton Hoo, in East Anglia, provides the first material evidence of a bitumen trade network between the Middle East and Anglo-Saxon England.

In 1939, excavation of the ship-burial mound at Sutton Hoo uncovered a large collection of Anglo-Saxon artefacts. Armour, silverware and gold jewelry found in the mound indicate that perhaps a king was once buried inside. However, the site’s acidic soil destroyed the body, along with the timbers of the boat covering the body. Small black tar-like lumps found with the Sutton Hoo grave goods were originally identified as Stockholm tar, since the gooey substance, produced from burned timber, was commonly used to waterproof northern European ships around that time.

While studying the chemical composition of various archaeological tar samples, scientists at the British Museum and the University of Aberdeen re-analysed the black lumps from Sutton Hoo using infrared spectroscopy. Instead of seeing molecular signatures common to tree resin, the researchers noticed hydrocarbon signatures from bitumen, a naturally-occurring petroleum product found in the UK and also the Middle East.

To identify the geographical source of the bitumen, the researchers compared the molecular and isotopic mass spectrometric fingerprints of the Sutton Hoo samples with those of bitumen recovered from several sites around the UK and in the Middle East. The cyclic hydrocarbons in the Sutton Hoo bitumen, along with the carbon-13 isotopic signature of its asphaltane component, most closely resembled bitumen collected from regions of the Dead Sea known to be ancient sources of the substance.

Middle Eastern bitumen found amongst the grave goods at Sutton Hoo indicates that it may have been traded as a valuable object, perhaps because the substance was rare or useful medicinally, says Rebecca Stacey, at the British Museum. The bitumen chunks may have also been shaped into specific objects, she adds, but the small pieces make it difficult to determine any intentional shape.

‘This is a lovely addition to our evidence for the energy and adventurous internationalism of 7th century East Anglia,’ says Martin Carver, an emeritus professor at York University, who was involved with the most recent excavation at Sutton Hoo. Other international artefacts found at Sutton Hoo include French coins, a Byzantine bronze bucket and Syrian tufted cloaks. ‘I think we can expect many more instances of travellers from 7th and 8th century England, whether pagan or Christian, exploring Europe and the Middle East.’

Stacey notes that bitumen is rare at UK archeological sites, and she wonders if it could be found at more locations. ‘With fresh analytical approaches, we can still bring new insight to material that’s been around for a long time,’ she says. ‘Who knows what other secrets there are yet to tell that we don’t know about?’