The biosensor market is expanding rapidly but many new and innovative biosensors will probably never make it to market, reports Jon Evans.

The biosensor market is expanding rapidly but many new and innovative biosensors will probably never make it to market, reports Jon Evans.

On the face of it, the biosensor field has entered a golden age. The global biosensor market is now worth nearly $7000m (?3800m) a year, up from only $5m in 1987, and these sales are helping to fund research into the next generation of biosensor technologies. Meanwhile, government funding for biosensor research has also been increasing, particularly for military and security applications, such as detecting chemical and biological weapons.

What is more, recent developments in nanotechnology offer the potential for highly sensitive detection and small, unobtrusive sensors that could be implanted in patients or incorporated into clothing. Many research groups are exploring the potential of designing biosensors based on carbon nanotubes, quantum dots and molecularly imprinted polymers (MIPs). 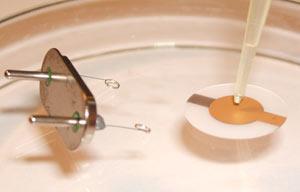 Imprinted polmers in a piezoelectric sensor pick up algal toxins

But some biosensor researchers are now questioning how long this golden age will last and whether the current excitement over new biosensor technologies will all end in tears. ’The vast majority of them will never see the light of day,’ predicts Michael Pishko, a professor of chemical engineering at Pennsylvania State University (PSU), US, who is researching a range of different biosensors for various applications. ’Despite the fact that people have been developing a lot of different kinds of sensors, I anticipate that most of those will not be commercially viable.’

One of Pishko’s biosensor colleagues at PSU agrees. ’It’s very, very difficult to separate the wheat from the chaff,’ says Craig Grimes, professor of electrical engineering. ’Everybody wants to tell you the good points of their technology, but no one wants to have an honest discussion of the limitations or the inherent problems.’ And these limitations and problems could prevent many novel biosensor technologies ever being commercialised.

Although scientists are investigating a wide array of different technologies, biosensors all have the same basic design. ’Biosensors are composed of two essential components,’ explains Anthony Turner, professor of biotechnology at Cranfield University, UK, and leader of a major biosensor research group comprising over 130 scientists, ’the transducers, which may be optical, electrochemical, piezoelectric, thermometric, magnetic or micromechanical, and the biological sensing elements, which range from insect organs and pieces of tissue to enzymes and antibodies.’ The biological sensing element detects a specific chemical or biomolecule by reacting with it in some way, and this causes the transducer to generate a recordable signal.

Advances in nanotechnology are now allowing scientists to shrink both the transducer and biological sensing element, offering the promise of high sensitivity and minute sample sizes. For instance, a number of researchers are investigating the potential of using carbon nanotubes - the poster boys of nanotechnology - as transducers.

One of the pioneers in this area is Michael Strano, professor of chemical and biomolecular engineering at the University of Illinois at Urbana-Champaign, US. In 2004, he and colleagues showed that single-walled carbon nanotubes (SWNTs) could be used as nanoscale glucose sensors, by taking advantage of their natural ability to fluoresce at near-infrared wavelengths.

Strano and his colleagues coated SWNTs with a layer of the enzyme glucose oxidase, which transforms glucose into gluconolactone and generates hydrogen peroxide as a byproduct. They then added potassium ferricyanide ions to the SWNT surface to change the electronic structure of the SWNTs and reduce their natural fluorescence. This fluorescence is restored whenever the SWNTs are exposed to glucose. 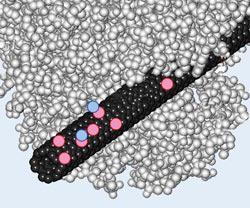 ’When glucose encounters the enzyme, hydrogen peroxide is produced, which quickly reacts with the ferricyanide to modulate the electronic structure and optical characteristics of the nanotube,’ explains Strano. ’The more glucose that is present, the brighter the nanotube will fluoresce.’ Because near infra-red light tends to pass through bodily tissue fairly easy, this fluorescence should be easy to detect.

Sensors for monitoring glucose levels in people with diabetes have driven the phenomenal recent growth of the biosensor market and now account for over 85 per cent of all biosensor sales. Current glucose biosensors work in a similar way to Strano’s SWNTs. They detect the hydrogen peroxide produced by the oxidation of glucose, although they do this by monitoring the current change generated by the oxidation of hydrogen peroxide at an electrode (known as amperometric detection).

Earlier this year, Strano and his colleagues adapted their SWNT technique to detect environmental contaminants and specific DNA sequences. This involved attaching DNA strands to the SWNTs and again monitoring changes in their fluorescence.

When environmental contaminants, such as calcium, mercury or sodium ions, came into contact with the DNA strands, they caused them to change shape, which altered the electronic structure of the SWNTs and therefore their fluorescence. Likewise, the researchers found that they could detect single DNA strands by attaching the complementary strand to an SWNT. The SWNT fluorescence alters when the two strands bind to each other.

Other researchers have investigated attaching biological particles such as proteins and antibodies to carbon nanotubes and monitoring their electrical conductivity rather than their fluorescence. But carbon nanotubes aren’t the only nanoparticles that are being developed as biosensors. Many researchers are equally excited about quantum dots. 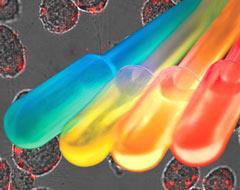 New biosensors make the most of quantum dot fluorescence

The researchers attach a fluorescent compound known as Cy5 to a DNA probe and the protein biotin to another. They then add these probes to a sample containing the target DNA strand and quantum dots coated with the protein streptavidin, which naturally binds to biotin.

The two probes bind to the target strand and then attach themselves to a quantum dot, via the binding between biotin and streptavidin. The quantum dot and Cy5 are now in such close proximity that, when illuminated with a laser, the quantum dot transfers its fluorescence to Cy5 through a process known as fluorescence resonance energy transfer. This generates a characteristic fluorescence signal that can easily be detected.

Using different peptide linkers, Drezek hopes to develop biosensors that can detect a whole range of proteases. ’This is important not only for early detection of several diseases, but, perhaps more significantly, in understanding and monitoring the efficacy of therapeutic interventions, including the growing class of drugs that act as protease inhibitors,’ she says.

Scientists are attaching similar biomolecules to a wide range of materials, in order to assess their potential as sensing elements. For instance, Pishko has embedded a range of enzymes, such as acetylcholinesterase, into the hydrogel poly(ethylene glycol) and used it to detect compounds that react with those enzymes, including inhibitors. These reactions cause the pH of the hydrogel to change and this alters the fluorescence of a compound incorporated into the hydrogel.

Unfortunately, biological molecules have a number of disadvantages as sensing elements. Chief among these are that they are quite delicate and can lose their activity fairly easily, for example if exposed to raised temperatures. So scientists are investigating a number of non-biological sensing elements, which are still able to detect biomolecules with great specificity.

Some of the most promising of these non-biological sensing elements are molecularly imprinted polymers (MIPs). As their name suggests, these are basically imprints of a specific biomolecule in a polymer and are analogous to creating a copy of a key in soft clay.

They are created by attaching functional monomers, such as acrylic acid and styrene, to specific areas of a molecule of interest. These functional monomers are then encased in a polymer matrix and the original molecules removed, often by applying a solvent or weak acid.

This leaves behind the polymer-encased functional monomers, which are arranged in such a way that only the original molecule can bind with them.

Turner and his colleagues at Cranfield University are investigating the biosensing ability of MIPs and have developed nanoscale versions that can detect proteins, such as haemoglobin and trypsin, and small molecules, such as biotin. The proteins and small molecules bind to their respective MIPs, causing compounds incorporated into the MIPs to fluoresce.

Other researchers are simply taking advantage of the unique properties of many materials at the nanoscale. In 2003, Grimes discovered that nanotubes made of titanium could detect hydrogen at unprecedented levels of sensitivity - 1500 times better than the next best material for sensing hydrogen. Exposing these nanotubes to hydrogen causes a huge change in their electrical conductivity; in fact, it is the largest known change in electrical properties of any material to any gas at any temperatures.

Grimes has since created arrays of these nanotubes for hydrogen detection and is now trying to get funding to produce a biosensor, based on these arrays, for detecting hydrogen-generating bacterial infections in babies, such as neonatal necrotising enterocolitis. 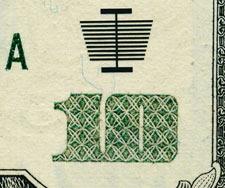 Magnetoelastic sensors can be incorporated into a flimsy $10 note

Grimes is also developing magnetoelastic sensors, which consist of thin strips of amorphous ferromagnetic ribbons that vibrate in a magnetic field. The precise frequency of these vibrations, which can easily be picked up by a magnetic coil, can reveal information about their surroundings.

’You can get a lot of information from these [magnetoelastic sensors],’ says Grimes. ’They will ring differently in a liquid than in a solid. If you put a sensor in some liquid blood and then the blood dries, you get a very distinct change in response. So the first successful application of these sensors has been for tracking blood clots.’

Grimes has already had some success in commercialising his biosensor technology and a magnetoelastic device is now in clinical trials and should be launched in 2007.

Many other biosensor researchers, including Pishko at PSU and Turner at Cranfield, have also successfully commercialised certain aspects of their research. Turner led the team at the US company MediSense that developed the first commercially available biosensor for home glucose monitoring and regularly licenses his team’s research to commercial companies. Recently, he licensed some of Cranfield’s MIP technology to Sphere Medical, a UK company developing novel monitoring products.

Some of Pishko’s early research led to the development of implantable electrodes for glucose detection and he is now developing microscopic glucose sensors, based on his hydrogel technology, for the US army.

But many other interesting biosensor technologies will probably never leave the laboratory. ’Academia is more focused on the "wow," rather then the nitty-gritty details of whether you can actually make it for any sort of realistic cost,’ explains Grimes. ’In contrast, businesses often focus on the nitty-gritty and frequently dismiss the "wow" capabilities.’

Turner agrees: ’Most companies are not terribly excited by just a new molecule that recognises things or just a new transducing technology. They want to see completely integrated systems.’ For instance, the four companies that dominate the glucose biosensor market - Roche, Abbott, Bayer and LifeScan - are mainly interested in developing smaller, more integrated glucose biosensors, which are easy to use and require smaller blood samples, based on existing amperometric glucose sensing technology. Even newer biosensor companies, such as Pelikan Technologies, are mostly interested in improving existing biosensor technology.

Nevertheless, as long as research funds remain available, researchers will continue to develop novel biosensor technologies, some of which may eventually reach the market place.

’I keep expecting to be able to cross off particular approaches and say that was an interesting academic idea but it doesn’t seem to be maturing into a product,’ says Turner. ’But actually I’m consistently proved wrong in that respect.’

Jon Evans is a science writer based in Bosham, UK.