Can't we just enjoy cocktails at Christmas without worrying about the science behind them? Not if the molecular mixologists get their way. Hayley Birch ventures to the bar 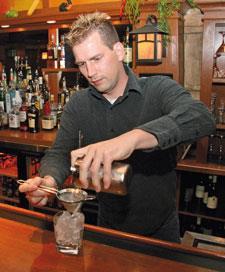 A few years back, Darcy O’Neil was tending the bar at a Canadian fine dining restaurant called Mint in London, Western Ontario. Sometimes, when the bar was quiet, he found himself chatting to customers - about this and that, but often about the drinks. It was the cocktail menu that really piqued their interest. What’s in this one? How do you make that foam? Why shaken, not stirred? They weren’t expecting scientific answers by any means, but that’s what they got, because it was to his first love - chemistry - that O’Neil returned to satisfy their curiosity.

Schooled as a chemist at the University of Western Ontario (also in London), O’Neil had since held several jobs in the petrochemical and pharmaceutical industries before taking a break from science to learn the ’art of drink’, now the title of his cocktail blog, one of the most popular on the web. But if making cocktails is, as his blog proclaims, an art, it’s one that’s largely dependent on science.

Though you will rarely see a vodka martini mentioned in a peer-reviewed paper, the scientific principles that go into creating the favourite tipple of Ian Fleming’s James Bond are more sophisticated than some of his imaginary gadgets. And now, riding on the coattails of culinary institutes involved in ’molecular gastronomy’, experimentalists in the cocktail business are employing scientific principles to take the drinks industry into entirely new realms. 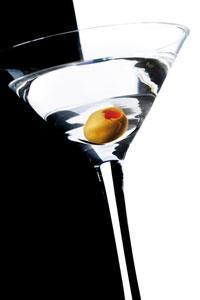 O’Neil has since returned part-time to continue his career as a chemist at the University of Western Ontario. But recalling his days behind the bar at Mint, he says his scientific approach to mixing a drink raised more than a few eyebrows. ’Most people are surprised that a bartender is knowledgeable about these things, and they find it fascinating,’ he says. ’Feeding them information on the scientific aspects of a drink is a great way to make their experience at the bar more enjoyable.’

A simple example is O’Neil’s ’Ramos gin fizz’, a cocktail with its origins in 19th century New Orleans, US. Done right, it is the perfection of the shaken egg drink that was popular at the time, he says. And it’s evident just from the recipe, with its precise timings (’blend for 20 seconds... shake for 30...’) and quantities, that nailing this cocktail requires the maker to adopt the methodical approach of a skilled scientist.

Method: To make the foam, put the gin, cream and egg white, juice and syrup into the tin half of a Boston shaker (one that uses a glass instead of a lid). Blend for 20 seconds whilst lifting the blender to incorporate air. Add a scoop of ice, cover and shake for 30 seconds. Strain the drink (no ice) into a tall chilled glass containing the soda and flower water.

Key to achieving the drink’s foamy texture are albumin proteins present in egg whites. The shaking action stretches and unfolds the protein molecules, encouraging them to form a network that traps air and results in the froth characteristic of the traditional gin fizz. Nowadays, though, it’s rare to find a bar that serves drinks containing raw eggs because of the risk of Salmonella  contamination. Many bars miss out the eggs altogether, but as O’Neil notes, substituting them for powdered egg white (guaranteed to be Salmonella -free) gets around the problem. 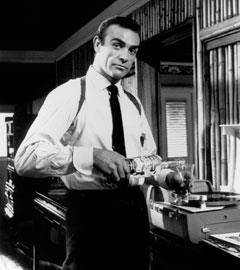 James Bond famously asked for his martinis shaken, not stirred. But why? It’s all in the oils

Coming from a scientific perspective then, it’s easy to understand the importance of a good shake to the texture of a cocktail. But what about the taste? Why, for example, would film spy James Bond have wanted to order a drink containing no trace of egg white - the vodka martini - shaken and not, as he was so famous for specifying, stirred?

One theory, according to Shawn Webster, who has recently been involved in researching cocktails as part of an outreach project at the University of Aberdeen, UK, relies on the assumption that back in the 1950s, Bond would have been drinking vodka made from potatoes. As he explains, oils present in the potatoes - but not in the grains that are more commonly used to make vodka today - are dispersed by shaking. ’The shaking will get rid of the oily taste which is associated with the vodka. However, if you just mix it then the oily taste will still be prominent in the drink.’

Another reason that a vodka martini, or any cocktail for that matter, is shaken is to get the ice in contact with the liquid, making sure it’s ice-cold for service. Although in the case of the martini, it’s perhaps more relevant - an unshaken martini can taste like lighter fluid, according to Webster. Shake it for too long, however, and the ice melts, diluting the drink.

In the past, ice companies have tried to claim that shaking the perfect cocktail requires ’extra-cold ice’. But with the emergence of cocktail science, that notion has been put to bed. O’Neil highlights the work of Eben Klemm, previously at Massachusetts Institute of Technology in Cambridge, US, now a full-time cocktail developer, in dispelling the myth.

’What happened was an ice company was promoting its ice as being the best ice for cocktails,’ O’Neil explains. ’And this research by Eben basically said, "No, ice is ice and in a cocktail you can shake it to a certain point and that’s as cold as it’s going to get". So it actually helps bartenders understand that, you know, you shake a cocktail 20 times and then it’s cold.’ Klemm’s work showed that under normal conditions, most cocktails will not get any colder than –7°C, equating to around 20 shakes. Any more and you’re just wasting your energy.

Webster is impressed by such innovation. ’I think some bartenders will appreciate that,’ he says. He’d like to employ similar levels of scientific rigour to test what happens to the taste if you shake a vodka martini versus stirring it. He’s also throwing gin into the mix - shaking a gin cocktail incorporates air, which is said to ’bruise’ the gin, supposedly causing flavour chemicals in the spirit to oxidise and creating a sharper taste. But it’s probably just another spurious theory. ’A scientific test really has to be done - like with the 20 shakes - to see if there is a difference in taste between one that contains vodka and one that contains both vodka and gin,’ says Webster.

Method: Shake the vodka and vermouth together 20 times in a cocktail shaker with several ice cubes. Strain into a cocktail glass and garnish with the lemon.

Like most of the research that’s been carried out on cocktails, however, Klemm’s cocktail shaking work wasn’t published in a scientific journal. As O’Neil says, there’s never going to be any money for a major research project in cocktail science. Any research that is going on is being done in personal time and with whatever scientific apparatus the experimenters can lay their hands on. ’I’m lucky, I work at a university part-time so I have access to some of this equipment,’ he says. ’Many of the researchers are curious about these oddball things I guess, but actually embarking on a major research project? There’s obviously not a lot of funding.’

Liqueurs can be layered in the glass based on their density, with stunning effects. A ’chocolate-covered cherry’ for instance, layers Bailey’s over denser Tia Maria over heavy Grenadine. This list provides a guide - those higher up should float on the denser liqueurs furtherdown. However, density varies with brand, so - purely in the interests of scientific endeavour, of course - it’s best to experiment. 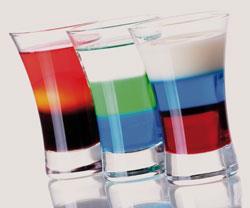 O’Neil has, himself, repurposed university lab equipment for the cause of cocktail research, including employing mass spectrometry techniques to analyse vodkas for the presence of different congeners - chemicals like esters and aldehydes that are produced in small quantities during fermentation and can change the taste. As it turns out, there’s little difference between most of the major brands of vodka in terms of these flavour compounds, despite what their marketing suggests.

The trend for molecular level analysis and design of drinks has already caught on under the guise of ’molecular mixology’, duplicating what molecular gastronomists are doing in the kitchen. In the UK, mixologist Tony Conigliaro of The Drinks Factory and Andrea Sella, a chemist at University College London, collaborate on a show called ’The Science of Cocktails’. Sella’s favourite trick is to demonstrate the slow drip of ice cold water into absinthe, resulting in the ’wonderful louching effect’ that occurs as terpenes in the spirit precipitate out of solution - surprising because both water and absinthe are clear liquids.

Incidentally, the classic French absinthe (known as la fée verte or the ’green fairy’), is one of the few cocktails - if it can be so called - that has actually appeared in a few scientific papers, mainly because of the debate over its supposed hallucinogenic properties.1 One of the culprits is thought to be a terpene called thujone, a not-so distant relative of menthol. ’Recently the tide has swung back in favour of it just being extreme alcohol poisoning which is doing those things, but there are still open questions in chemistry and pharmacology about it,’ says Sella.

Method: Place the sugar cube on a flat, perforated spoon. Rest the spoon on the rim of a glass containing the absinthe. Slowly drip the iced water onto the sugar cube. The sugar-water will gradually drip into the absinthe, turning it from amber to a cloudy pale green colour as the oils precipitate out.

The universe in a glass

Although Sella and Conigliaro’s show is intended to entertain, there is some quite serious science going on behind the scenes. Under the eaves of a house in Islington, above his bar, Conigliaro is currently kitting out a very cramped cocktail lab with various pieces of scientific equipment. There, he’s been experimenting with hydrosols - products from steam distillation of plants - and has recently worked out how to get a more flavourful extract, from mint for instance, by adding salt.

Conigliaro is quite the poster boy for molecular mixology, having picked up a prize for International Bartender of the Year at last year’s New Orleans cocktail awards. At Shochu Lounge, in London’s West End, Conigliaro has served up cocktails of his own design, including a chamomile cooler that’s topped with fizzing foam. The foam is made by putting gelatine through a siphon of nitrous oxide, which, unlike carbon dioxide, doesn’t cause the pH to drop.

There’s absolutely no doubt, says Sella, that molecular mixology is capable of producing some exquisite cocktails. For Sella, though, it’s never really been about the drinks. ’I’m not a big cocktail drinker to be honest,’ he says. ’To me, the cocktails are kind of the universe in a glass - they’re the means by which you can talk about all sorts of interesting things.’

O’Neil, however, is of the opinion that, sometimes, you just have to let the drink do the talking. There comes a point, he says - presumably after the cocktail has been shaken to perfection and is standing on the bar - when words are no longer necessary. ’You know, it’s fun when people are curious,’ he says. ’But at the end of the day, people just want to enjoy their drink.’