In the leaf, nature has achieved a great feat of technology. It has succeeded in doing what scientists, with all their sophisticated tools, have been trying to do for decades: using light to drive the splitting of water into its component parts to make a fuel. A conceptually simple idea, perhaps, but one that has taken up whole careers and absorbed billions of dollars of research funding. 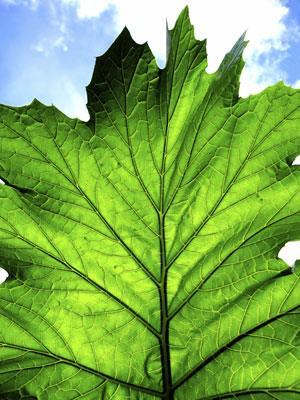 The ultimate goal, of course, is to make use of the abundant energy source that is our sun to power the planet, helping us kick our carbon habit in the process. It’s worth remembering that if only a thousandth of the solar energy that reaches the Earth could be utilised, we would still have nine times the amount of energy we needed.1 And if the sun’s energy could be used to split water, we would have hydrogen and oxygen, renewable fuels which could be recombined in a fuel cell - even in the dark, or on a cloudy day - to give us electricity.

It’s not that we don’t have the capability - you could fix a photovoltaic cell onto an electrolyser and have your water splitting device up-and-running tomorrow - it’s that to be commercially viable, any such system would not only have to work efficiently, but would need to be made from cheap materials and run for years. Finding those materials is easier said than done.

More than a decade ago, John Turner and Oscar Khaselev at the US National Renewable Energy Laboratory in Golden, Colorado, created a water splitting device by combining photovoltaic and photoelectrochemical technology.2 It did the job, producing hydrogen four times more efficiently than photosynthesis. Unlike photosynthesis, however, their system used rare metals and wasn’t stable even for a day.

Britt’s team uses electron paramagnetic resonance (EPR) spectroscopy to explore the inner structures of biological systems. His current focus is the oxygen evolving complex (OEC) - the active site of the enzyme complex known as photosystem II, which catalyses water oxidation in plants. Previously, x-ray crystallography techniques have been used to study the OEC. But the trouble with x-rays is that they generate photoelectrons that alter the structure of the photosystem, leading some scientists to contest the accuracy of the existing crystal structures. Spectroscopies, explains Britt, are less damaging and can help probe the intermediate oxidation states of the complex.

Despite some recent success in characterising the protein ligands that coordinate the central manganese cluster of the OEC,3 however, Britt says much still remains unknown. ’What’s going on with the overall structure - that’s still quite a mystery. And that’s of course what you really need to understand if you’re going to design new systems that work on the same principles as nature.’

Unfortunately, nature has a couple of billion years’ worth of evolution on us - and, as far as we know, has only come up with one solution. ’Unless we find some bug somewhere that we don’t know about yet, everything uses the same tetranuclear, manganese-calcium complex to do this water splitting reaction,’ he says. 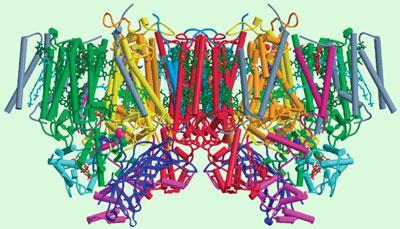 Since nature’s blueprint remains, for the moment, under wraps, scientists developing water splitting systems have had to come up with their own designs. And the oxygen evolving part is, of course, only half the equation; there’s also the hydrogen to contend with. At a deeper level, this involves trying to choreograph the movements of a cast of electrons as they flit between the water molecule and its constituent elements - two oxygen ions need to lose four excess electrons to form molecular dioxygen, while the corresponding four hydrogen ions need an extra electron each to form two molecules of dihydrogen.

To drive this reaction, researchers must first find a semiconducting material that can effectively capture the sun’s energy, as chlorophyll does in plants. According to Turner, this materials search is what’s really holding up progress.

’The materials that everybody has been talking about, like iron oxide, or titanium dioxide, will never be commercial in their current form, or perhaps even in an improved form, because their solar conversion efficiency is just too low,’ says Turner. ’So we need a new material with better properties. It may be sitting on the bench top right now and we’ll hear about it in a month or two, or it may take three or four years more effort.’

Turner and Khaselev’s early water splitting device used gallium arsenide and gallium indium phosphide as semiconducting materials. Hydrogen formed on the gallium indium phosphide, while the device used a platinum electrode to rip out the oxygen. The problem was that the semiconductors degraded far too quickly in solution. Turner says any future device will have to use materials very similar to those in current solar cells - as a bonus, the hunt for the ideal water splitting material could also throw up a better solar cell material.

At Pennsylvania State University, US, a group led by Tom Mallouk is trying a different approach to doing what chlorophyll does - a molecular approach based on dye-sensitised solar cells. In ordinary dye-sensitised solar cells, which are already commercialised, dye molecules capture visible light and the cell converts it into electricity. The dye molecules turn over billions of times and remain stable for years. If some of the same principles could be applied to artificial photosynthesis, we might have a practical device.

’For cheap kitchen chemistry solar cells, the dye-sensitised cells are really pretty good and remarkably robust considering they have a dye in them that you think is not going to be stable,’ says Mallouk. ’The trick is that the molecule doesn’t spend any time at all in the excited state or in the oxidised form, because the kinetics are rigged to be so fast getting those electrons where they’re supposed to go.’ 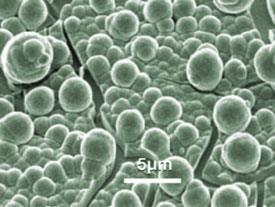 Mallouk admits his own system, which uses a ruthenium-based dye,4 is still ’pathologically poor’ in terms of turnover. The system uses the dye as a molecular bridge, which absorbs light energy to help pump electrons from hydrated iridium oxide - a known water oxidation catalyst - to a titanium dioxide film. This film forms the anode, which is wired to a platinum cathode, where the hydrogen forms. Despite the low turnover, with the general scheme in place, the electron transfer rates should be tunable, says Mallouk.

But what about those cheap materials we have to find? ’Everyone heckles me that I’m using the most expensive materials in the periodic table, but this is a proof of concept project and so I’m not concerned about that yet,’ says Mallouk. ’There’s no point screwing around with cheap stuff that doesn’t work before you understand the principles of how to make something.’

One person who has found a way to split water and do it cheaply - at least on the oxygen evolving side of things - is Dan Nocera at the Massachusetts Institute of Technology, US. Last year in August, Nocera and co-author Matthew Kanan published a paper in Science  that many considered a major breakthrough for the field (See Chemistry World  , September 2008, p25). The paper describes an oxygen evolving catalyst formed, on an indium tin oxide electrode, from cobalt and phosphorus - both cheap, abundant elements.5 According to Nocera, the oxygen evolving half of the reaction is the most difficult - and one of the unique things about his catalyst is that it works under ambient conditions. ’That’s really different and special,’ he says. ’Nobody’s been able to make an inexpensive catalyst that operates efficiently in an open glass of water. And that means it’s at pH 7, at ambient pressure and room temperature - that’s how photosynthesis works.’

Although the exact mechanism is unknown, Nocera thinks positively charged cobalt ions must pull electrons from the hydrogen atoms of water molecules, releasing oxygen in the process. Impressively, oxygen is formed at a rate rivalling that of photosynthesis. But according to Nocera, the most exciting thing about the catalyst is its ability to self-repair, which is analogous to that of the leaf.

’In photosynthesis, the leaf repairs every half an hour,’ he explains. ’It takes out the subunit that the oxygen evolving complex is in and makes a whole new protein that it inserts. And this catalyst is doing it better than the leaf - if cobalt falls out of the catalyst, then it gets oxidised and the phosphate brings it back to the electrode.’

The only downside is that the electricity needed to generate the cobalt ions, which are formed when a current is run through an electrode in the solution, still comes from fossil fuels through a socket in the wall. ’This catalyst doesn’t work unless we find the main material, that light absorbing material which is driven by some kind of energy,’ Turner points out. ’You can shine light on this catalyst and nothing happens.’

Although he says the advance is a good piece of science, Turner argues that plenty of good oxygen evolving catalysts already exist that don’t use precious metals. And in any case, he adds, the light absorbing material that scientists eventually find may not work in neutral solution.

So if making water splitting work with solar is so difficult, why do it at all? As Nocera notes of his catalyst, it doesn’t matter where the current comes from - as long as the end result is oxygen and hydrogen, the latter of which can be stored, and later recombined in a fuel cell with oxygen from the air to produce electricity. ’The current could come from a wind turbine or from a photovoltaic,’ he says. ’The catalysis doesn’t care.’ 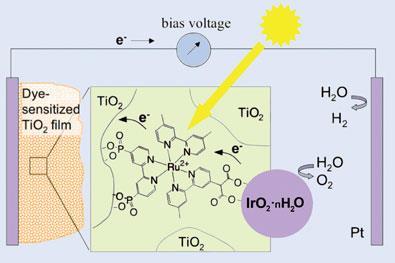 And according to Britt, some of the more elaborate bio-inspired systems for utilising solar energy are never going to be economically viable. ’Sometimes people try to make things that duplicate the architecture of photosystem II and that’s all very well and good, but I can’t ever imagine how you can scale that up to the size of a solar panel,’ he says. ’A square metre of a panel would cost something like a billion dollars to make.’

Turner believes that in the near future, a combination of a number of different renewable energy sources is what is required. But, he says, the only one sufficient to power our entire society by itself in the long term is solar. His hopes still rest on finding that material with special properties that will really spark commercial interest in solar water splitting technology. ’Big companies like GE and General Motors have looked at it because they understand that future energy systems are incredibly important,’ he says. ’But of course the economic climate at the moment is not conducive to putting in a lot of investment into research and development for new materials. Companies are
just trying to hold on.’

Hayley Birch is a freelance science journalist based in Bristol, UK