(+)-Myrrhanol C is a natural triterpene isolated from mastic gum (the resin of Pistacia lentiscus), a substance well known for its medicinal properties as well as use in various cuisines. The compound itself was used to embalm corpses in ancient Egypt. More recently, it has been recognised as a promising anti-prostate cancer lead. However, before a molecule can be used to develop drugs, a successful synthesis must be developed. 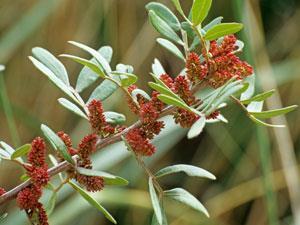 Mastic gum (from Pistacia lentiscus, pictured) has been used for many applications, from treating snakebites to tooth whiteners.

Alejandro Barrero and his group at the University of Granada have done just that. Their synthesis starts with (–)-sclareol, a bicyclic diterpene alcohol isolated from clary sage (Salvia sclarea). It then proceeds through a key C–H oxidation step, which is achieved with cytochrome P450 enzyme catalysis by incubating a reaction intermediate with the fungus Mucor plumbeus.

By cultivating clary sage, Barrero can sustainably produce (–)-sclareol, meaning (+)-myrrhanol C can be made on a large scale that is also environmentally friendly.

However, the use of natural products and processes in the synthesis also gives another important benefit to the synthetic strategy. ‘Apart from using a natural chiral synthon as starting material, the only process generating a new chiral centre is the microbial hydroxylation,’ explains Barrero. This means the researchers could carefully control the stereochemistry of the synthetic product, which could be very important for clinical applications. ‘The selectivity [for the (+) isomer] of our synthesis is total,’ he concludes.

Bob Hill, a natural products expert at the University of Glasgow, welcomes the synthesis of (+)-myrrhanol C even though he is not enthused by the chemistry. ‘They seem to have produced a reasonably good synthesis (using established methodology) to a potentially useful compound,’ he says.

Barrero says that the next step is to investigate synthetic analogues and their antitumour activity with a view to drug discovery.