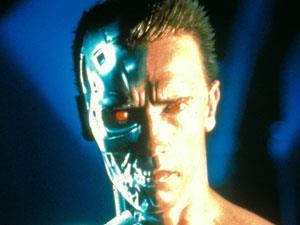 Synthetic skin for robots that can repair itself when it becomes damaged – akin to the idea of the T-800 cyborg in Arnold Schwarzenegger’s Terminator films – has taken a step closer to reality with new research by scientists in the US. The researchers, led by Zhenan Bao of Stanford University in California, have created a flexible, touch-sensitive, electrically conducting and pressure-sensitive polymer-based material that could have ‘e-skin’ applications for robots or prosthetic body parts, such as artificial hands.

The polymer matrix consists of a network of randomly branched oligomers that contain multiple urea groups. The presence of these groups results in a high density of hydrogen bonding within the network – contributing substantially to the structural integrity of the matrix’s scaffold. Nickel particles are dispersed throughout the matrix. The presence of oxygen on the surface of the nickel particles, in the form of an oxide, also allows hydrogen bonds to be made with the urea groups, further contributing to the structural stability of the composite.

The micro-nickel particles impart electrical conductivity to the material. ‘The particles do not need to be in contact with each other for electrical conductivity to occur,’ says Tee. ‘Electrons can hop between the particles through quantum tunnelling.’ The team found that particles that were microscopically rough, covered with tiny spikes, produced a more efficient conducting matrix than smooth particles. This, Tee says, is because the electronic charge accumulates at the tips of the surface spikes, enhancing quantum tunnelling and thereby enabling more efficient charge transfer throughout the matrix. The team showed that if the polymer is broken or damaged, once the damaged parts are placed together and the healing process starts, electrical conductivity is almost completely restored within about 15 seconds.

The ‘e-skin’ can detect the application of pressure. The harder someone presses the brighter the mannequin’s LED glows

If an external load is applied to the polymer, this changes the distance between the nickel particles, resulting in a change in conductivity. This allows the e-skin to detect changes in pressure or its shape – which would allow, for example, the position of moveable joints to be monitored. However, the material is not as stretchy as the researchers would like – something, Tee says, that is now being worked on.

Commenting on the work, Wayne Hayes, an expert in self-healing polymers at the University of Reading in the UK, says: ‘Although this isn’t the first example of a supramolecular polymer–metallic particle composite, the paper does report the successful use of electrical conductivity in the route to healable elastomers and materials of this type do offer a way towards healable devices, especially in coatings or the biomedical field.’ Hayes adds: ‘It is a nice preliminary result but there is a significantly more fundamental science needed to understand the healing mechanism within this type of composite and further development work required before such materials can be used in feasible devices.’