Magnetism on the scale of individual molecules is a key factor in the search for more efficient ways to store and record digital information. In a collaborative effort, scientists from the UK, France and Italy have prepared a new single molecule magnet (SMM) based on a polymetallic cobalt cluster that shows rather unusual magnetic behaviour. 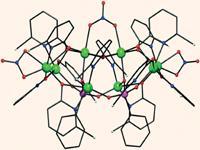 Whereas conventional magnets work because of the bulk effect of the unpaired spins of hundreds of thousands of metal centres, with SMMs, each individual molecule acts as an ultra-small magnet that can be used to store information. Theoretically, this could be one bit of information per molecule. The much smaller size of SMMs compared with traditional magnets means far more information can be stored on hard drives and other devices, with obvious huge commercial and industrial benefits.

The majority of SMMs studied to date are based on manganese oxide clusters, with some studies done on other transition metals such as iron and nickel. Richard Winpenny from the University of Manchester, together with colleagues from the Institut de Chimie de la Mati?re Condens?e de Bordeaux and the Universit? degli Studi di Firenze & INSTM, have concentrated their efforts on using cobalt as the central metal. Cobalt(II) is a potentially good SMM candidate because it has a large uneven distribution of magnetic properties, resulting in a considerable energy barrier that hampers the loss of magnetization in the material.

Winpenny made a cluster containing eight cobalt centres. Magnetic studies on the cluster revealed two very different relaxation pathways for loss of magnetization-the majority of the sample showed a fast relaxation process, however, a small fraction relaxed slowly, indicative of SMM behaviour. The authors believe that this could be of potential interest for fast switching of magnetization, although more work still needs to be done.

The major drawback for SMMs is that unusual magnetic properties such as these can only be realised at very low temperatures. However, SMMs have a number of advantages over traditional magnets-room temperature synthesis, solubility in organic solvents and the ability to easily manipulate the molecular structure. The future holds great potential for new compounds that show SMM behaviour at higher temperatures.