US chemists William Moerner and Allen Bard have jointly been awarded the 2008 Wolf Prize for Chemistry, for their pioneering work on single molecule spectroscopy. The $100,000 (?51,000) prize, awarded annually by the Wolf Foundation of Israel, will be presented by Israeli President Shimon Peres  in Jerusalem on May 25.

Moerner, based at Stanford University, was selected by the prize committee as the first to achieve optical detection and spectroscopy of individual molecules. Bard was recognised for his parallel work in electrochemical single molecule detection at the University of Texas at Austin.

’I was quite surprised to win the award, truthfully - although it’s a nice to get the prize,’ Bard told Chemistry World. ’The first thing I always think about are all the other people who could have won, and all my colleagues and co-workers, who don’t get the credit they deserve.’ 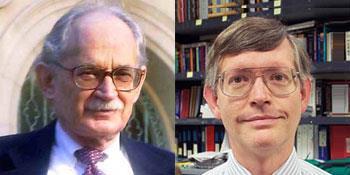 ’The technique uses a very small tip - so in that sense it’s a little bit like scanning tunnelling microscopy - but the tip is used as a kind of electrochemical radar to look at a surface below it and get chemical information from it,’ Bard explained. Electrochemically activated molecules quickly travel from the tip to the surface, where they react, before returning to the tip, effectively reporting back on the surface structure.

’We’ve used the microscope for a lot of different applications,’ said Bard. ’Right now we’re trying to discover new electrocatalysts for fuel cells. These devices use catalysts that almost always involve platinum, which has a very high cost. SECM is a very nice way to test arrays of new catalysts - and we’ve found several good, platinum-free alternatives.’ The team are also looking at photocatalysts that could use sunlight to split water, giving hydrogen for fuel.

’I haven’t spoken to Bill yet, as I just found out about the prize yesterday,’ added Bard. ’But of course I’ll celebrate with him in Jerusalem.’