Researchers in Germany have developed a DNA-based ’crane’ that can pick up molecules from a depot and deposit them precisely at a target site.

The team led by Hermann Gaub at the University of Munich used the cantilever of an atomic force microscope (AFM) to move molecules around. They fixed a short DNA ’hook’ to the AFM tip, designed to form a double helix when it binds to a complementary ’carrier’ strand.

In their experiment, the researchers used the ’carrier’ DNA to ferry a fluorescent tag to the target site, but other kinds of payload could also be attached, they say. At the start, the carrier strand is attached to a so-called DNA ’chip’ or array and forms a double helix with another ’support’ strand attached firmly to the chip. 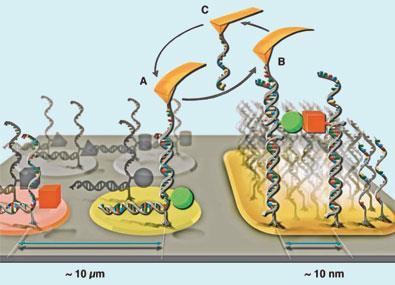 Cartoon of the DNA crane in action. (A) Individual nanosized objects are picked up from discrete storage sites with a DNA strand at the tip of an AFM cantilever and transferred to a target site (B). The length and binding geometry of the strands are chosen so that a hierarchy of unbinding forces allows the repetition of this process over and over again.

When the crane swings around to pick up the cargo, the DNA hook binds firmly to the carrier DNA and pulls it away from the support strand.

The team designed the geometrical arrangement of the molecules on the chip so that the crane pulled the carrier away from the support strand one base at a time - ’unzipping’ the DNA. This ensured that the hook binds to the carrier more strongly than the carrier does to the support.

To demonstrate the technique, the Munich team wrote the letter ’M’ using 400 fluorescently-labelled molecules. They were able to guide the AFM tip to the target site with a precision of around 10nm. In future, the DNA chip could act as a ’depot’ for molecular building materials for the crane to pick up

Friedrich Simmel of the Technical University of Munich’s nanophysics group told Chemistry World: ’The strength of the new technique lies in the fact that it is capable of directly "writing" molecular structures on surfaces in a modular and programmable way. This could be used, for example, to produce combinatorial biomolecular patterns on surfaces for biosensor applications.’