A sweet switch for an ageing heart

Studies revealing how the protein elastin – found in heart tissue and blood vessels – responds electrically to glucose could offer new clues to problems that arise as we get older, including loss of elasticity in major blood vessels and arteriosclerosis. The research might ultimately point to a way of slowing or even reversing the damage.

Elastin is an extracellular protein found in the connective tissues of vertebrates. As its name suggests, it can stretch and return to its original shape and size. Recently, however, biological ferroelectricity was observed in elastin present in the heart's major artery, the aorta. Ferroelectricity is a property of materials where their electric polarisation can be reversed by an electric field and is analogous to ferromagnetism. 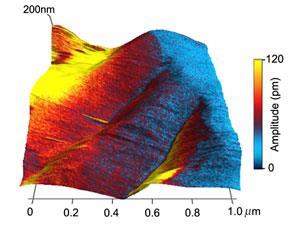 Now, US researchers at the University of Washington and Boston University, led by Jiangyu Li and Yanhang Zhang, have extended their earlier discovery using piezoresponse force microscopy to show that elastin is indeed switchable in an electrical field. Moreover, their study reveals that glucose can freeze the internal asymmetric polar structures of elastin and so prevent further switching. Further work could corroborate the importance of switching in elastin in blood vessels, the heart muscle itself, the lungs and other tissues and organs. All such tissues are exposed to physiological stresses throughout our lives, so the inhibition of ferroelectric switching by glucose could have implications for understanding the ageing process and numerous degenerative diseases.

A mechanism for how glucose switches off ferroelectricity in elastin has yet to be found. However, the data from this study hints that the glucose-initiated formation of cross-links between protein fibres might be to blame. This would tie in with theory about the hardening of the arteries, for instance, and points to an underlying explanation for problems found in the elderly with a lifetime of exposure to glucose, and to younger individuals with a high sugar diet, obesity and diabetes.

The team suggests that their findings might also explain exactly why elastin is ubiquitous in vertebrates. They hypothesise that ferroelectric switching provides a damping mechanism that reduces the potentially damaging effects of blood pulsing through arteries and into organs. By contrast, the connective protein collagen serves the same function as elastin in invertebrates, but does not have to contend with pulsing blood flow, and this protein does not appear to be ferroelectric.

Andrei Kholkin and his team at the University of Aveiro, Portugal, recently observed ferroelectricity in the simplest amino acid, glycine, signalling that ferroelectricity may be an intrinsic property of proteins. ‘Ferroelectrics are materials with strong coupling between mechanical stress or strain and electric field or polarisation,’ he explains. ‘That opens up a lot of possibilities for preventing these diseases by applying not only an electric field but also mechanically stressing elastin and other bioferroelectrics.’