A window into oysters' armour 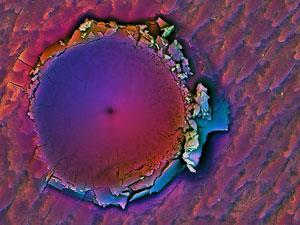 The elaborately structured transparent armour of a particular oyster dissipates energy in a small area, ensuring that the body of the armour remains unaffected. The researchers behind the new findings plan to use them to design visors and windscreens.

Armour needs to disperse impact energy enough that it does not develop a hole, while localising any damage so that the bulk is not compromised and the armour can sustain more hits. This is particularly tricky for transparent armour as cracks scatter light, making the armour opaque. Ceramic armour today usually comprises a single plate that dissipates energy by forming hairline cracks through the material. ‘For windshields, that stops the bullet but it's also very hard to see around,’ says Christine Ortiz of Massachusetts Institute of Technology in the US, who led the work.

Living creatures have evolved various ways to limit and localise the damage their armours sustain when hit, so, working with the US Department of Defense, Ortiz' group went to the Smithsonian Institute in Washington seeking species with transparent armour.

In the new research, Ortiz and student Ling Li studied the near-transparent armour of Placuna placenta, commonly known as the windowpane oyster, which comprises single-crystalline calcite nanocrystals arranged in a tiled pattern, with tiny amounts of organic material at the crystal interfaces. Scientists are uncertain whether the armour's transparency confers any advantage on the mollusc or whether it is a fortuitous accident.

The researchers indented crystals of pure calcite and oyster shell with a diamond tip and compared the responses. The single-crystalline calcite forms cracks extending radially into the material, while the P. placenta shell forms symmetric “deformation twins” extending horizontally through the cleavage planes in the nanocrystals. The organic interfaces stop these from spreading.

These deformation twins not only dissipate energy, but, when more force is applied and bulk cracks form in the crystals, they redirect the cracks and resist clean breakage, allowing each crystal to dissipate more energy and protecting the surrounding structure. Overall, the bivalve shell can absorb nearly 10 times as much energy per unit volume as the single crystalline calcite.

Biomineralogist and crystallographer Alejandro Rodrìguez-Navarro of the University of Granada in Spain says that scientists have studied similar mollusc shells before, but ‘this is really unique in a sense, because they explain very well the toughening mechanisms of these ceramic materials by a series of energy-dissipating events.’

The researchers are planning to explore synthetic versions of these transparent biomaterials further. ‘We're looking at a whole variety of semi-transparent materials and creating a design library,’ says Ortiz, ‘and we're going to be exploring those designs in synthetic 3D-printed prototypes.’ They will not use the same minerals as the creatures themselves, but are instead ‘trying to translate the core design into a bio-inspired system.’