Carbon nanotubes can be dissolved in chlorosulfonic acid for easy processing

US researchers have found new ways of dissolving carbon nanotubes without chemically modifying them. The solutions can then be easily processed into a variety of fibres and films, which combine the unique strength and conductive properties of the nanotubes and could speed up the large-scale application of nanotube-based materials.

Matteo Pasquali and colleagues from Rice University in Texas, US, used chlorosulfonic acid to dissolve single-walled carbon nanotubes (SWNTs). The tubes dissolve spontaneously, forming true solutions at low concentrations and liquid crystals at higher concentrations, but Pasquali explains that because the tubes are actually dissolved, they can be processed using standard techniques that are impossible with more usual suspensions of the tubes. 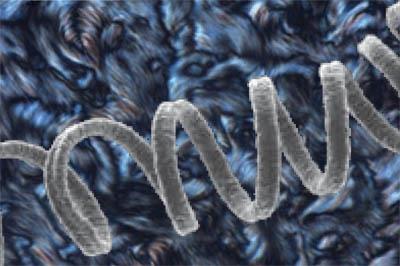 ’It’s 18 years since the discovery of nanotubes,’ says Pasquali, ’and there was a lot of early excitement about their engineering applications, but that requires you to be able to process them into objects or materials on large scale.’ He adds that this ease of processing is one reason why polymers have become so widely used, but nanotube materials were held back by the fact that they don’t dissolve in any normal solvents.

Ian Kinloch from the University of Manchester, UK, explains that nanotubes, especially SWNTs are particularly difficult to dissolve because they tend to stick together in bundles. ’The normal tricks to try to dissolve them are to use surfactants or chemically modify the surface,’ he says, ’but this can affect the properties of the final material.’ He explains that using superacids to dissolve the nanotubes protonates them, making them positively charged. This makes the tubes repel each other and breaks up the bundles.

’With chlorosulfonic acid, the dissolution is immediate and spontaneous - we don’t have to sonicate the mixture, we can just mix it very gently,’ says Matteo. This means the tubes are less likely to be damaged and hence the properties of the final materials should be improved, although he adds that more work is needed to grow longer tubes in combination with the processing techniques to really make useful materials.

Kinloch points out that Matteo’s group has done a significant amount of work to fully understand the physical chemistry of their system, and that that pays off when it comes to processing. ’Another advantage,’ he adds, ’is that they’ve taken inspiration from a technique that’s already industrialised for polymers like Kevlar using these kinds of acids, so its easy to see how the technology could be developed.’

Making fibres from nanotubes, rather than other forms of carbon, says Pasquali, could lead to more functional composite materials in which the strength and electronic properties of the nanotubes can both be exploited. ’One example would be aircraft fuselages, where aluminium is being replaced by composites.’ Aeroplanes need to have conducting surfaces to survive lightning strikes, but many composites are not sufficiently conductive, so they have to be coated or painted with conducting materials. ’Using nanotubes could give enough conductivity to use a single material without needing the coating.’