Atmospheric aerosol particles long thought to be liquid can in fact be amorphous solids, prompting a possible rethink of atmospheric and climate models

An international team of researchers has found that atmospheric aerosol particles long thought to be liquid can in fact be amorphous solids.1 The discovery could have implications for understanding the formation of such particles and could improve atmospheric models and climate predictions.

Secondary organic aerosol (SOA) particles form in the atmosphere by the oxidation of predominantly plant-derived volatile organic compounds (VOCs) and influence the Earth’s climate by scattering solar radiation and acting as cloud-forming nuclei. Knowing their physical phase state is fundamental in understanding how the particles form, which in turn affects how atmospheric models are produced. Although previous reports have hinted that SOA particles might exist as solids2,3, this new study is the first to provide direct evidence, prompting a need to revise existing models. 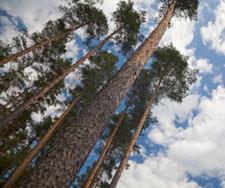 ’Initially when we saw the experimental data we thought something must be wrong with our apparatus,’ says Annele Virtanen at Tampere University of Technology in Finland, who carried out the research with international colleagues. ’It was only after many additional experiments and very careful tests that we convinced ourselves that the only explanation was that the particles had to be solids.’

The team first captured SOA particles in a plant chamber that contained Scots pine seedlings. The plants emit terpenoids - naturally occurring (VOCs) - and react with hydroxyl (OH) radicals and ozone (O3) to form SOA particles. Using an electrical low-pressure impactor, the team forced the particles to collide with metal substrates. If in a liquid state, the particles would be seen to stick to the surface, but the team observed the particles bounce off.

’The belief that the organic component of atmospheric aerosol particles is liquid is widespread in the atmospheric science community,’ says Paul Ziemann, at the University of California, Riverside, US. ’It is amazing that Virtanen and coworkers were able to so convincingly disprove this important premise, and that they did so from rather simple but elegant measurements on particles formed in forests, arguably the most important type of particle present in the atmosphere.’

George Marston, an atmospheric chemistry expert at the University of Reading, UK, thinks the work is ’very interesting.’ He points out that internal aerosol material will have a longer lifetime in the solid phase than the liquid phase owing to diffusion limits for the transport of reactants into the particles. ’Thus the ageing of aerosols in the atmosphere will be strongly affected, and the processing of aerosol particles to act as cloud condensation nuclei is strongly affected;  this has obvious implications for the role of SOA in climate.’

The discovery doesn’t mean that current climate models are totally wrong, however. ’The biggest scientific uncertainties in climate model predictions are related to the magnitude of the cooling effects of aerosols,’ explains Virtanen. ’We believe that predictions will become less uncertain when the details regarding the particle phase and chemistry have been implemented to the models, but these new predictions will most probably remain within the error bars of the current predictions.’