Photosynthesis could have been flourishing on Earth nearly a billion years earlier than previously thought, according to a study by American geochemists.

The oldest fossil record of photosynthetic bacteria predicts their origin at around 2.7 billion years ago. But new evidence could push the figure back to 3.46 billion years ago - provoking new questions about how life might have evolved on an early Earth.

The findings come from analysis of bright red Jasper rocks from Pilbara Craton, Western Australia - a 200m-thick rock formation that extends over 30km across the landscape. The silicon and iron oxide-based rocks were laid down around 3.46 billion years ago, and are ’pillowed’ by salt that indicates they were once submerged 200m under the sea. 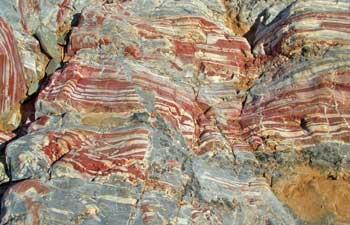 Banded Jasper outcrops near the town of Marble Bar, Western Australia were once 200m under the ocean

’What we have here is the oldest chemical fossil of oxygen molecules from the ancient ocean,’ says Hiroshi Ohmoto, who led the research team at Penn State University, US.

’Our studies indicate that the free oxygen content of deep ocean water 3.46 billion years ago was at least 10 per cent of the oxygen present today,’ Ohmoto told Chemistry World. This is a tell-tale sign that photosynthetic life was thriving, Ohmoto suggests, because the best explanation for such high oxygen levels so deep in the ocean is large-scale photosynthesis being performed by green-blue algae known as cyanobacteria.

The origin of photosynthesis is a hot topic of debate as it marks a key turning point in the evolution of life. Before photosynthesis, the atmosphere is thought to have been primarily ’reducing’ in nature - containing large amounts of methane, ammonia and hydrogen sulphide. Photosynthesis turned this upside-down by producing huge amounts of oxygen, causing an ’oxygen catastrophe’ that wiped out non-oxygen based microbial life.

But identifying the time of this switchover is difficult, and it was another two billion years before multi-cellular organisms began to emerge - an unusually long period of time. According to Ohmoto’s studies, this figure would rise even further to almost three billion years - a time lag that will pose new questions for evolutionary biologists.

’These are some very interesting findings,’ said Euan Nisbet, an expert on Archaean geology at the Royal Holloway University of London. ’It will certainly give researchers in the field some new things to think about.’