A compound found in cannabis as well as in herbs such as basil and oregano could help to treat inflammatory bowel diseases and arthritis, Swiss scientists believe.

(E)-beta-caryophyllene (BCP) is an aromatic sesquiterpene that has used for many years as a food additive because of its peppery flavour. The researchers now say that it interacts selectively with one of two cannabinoid receptors, CB2, blocking the chemical signals that lead to inflammation without triggering cannabis’s mood-altering effects.

Many cannabinoids bind to the CB2 receptor, but few target it selectively. Most also interact with CB1, which is responsible for cannabis’ psychoactive properties. CB1 is found in brain tissue, whereas CB2 is found only in cells elsewhere in the body. 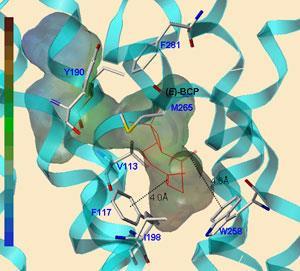 Model of the interaction of BCP with the CB2 receptor

The compound is the only product identified in nature that activates CB2 selectively. ’There are many compounds that have been designed synthetically that are CB2 selective, but they are made in the lab,’ says J?rg Gertsch, who led the study at the Swiss Federal Institute of Technology.

According to Gretsch, BCP is potent enough to have an impact at normal dietary levels. Herbs such as basil and oregano contain large amounts of the compound, he says, suggesting that the Mediterranean diet may protect against Crohn’s disease and other inflammatory bowel diseases. ’If somebody eats a lot of herbs containing essential oils then it’s possible they could get enough to reach a therapeutic dose,’ Gertsch says.

The team screened a whole library of natural products for cannabinoid activity, which led finally to fractionation of Cannibis sativa  essential oil and identification of BCP as the active component. They then tested the compound by using it to treat mice with swollen paws and found that in around 70 per cent of cases, small doses of BCP were enough to make the inflammation subside. BCP may also account for the for the anti-inflammatory properties of copaiba oil, an essential oil prescribed by doctors and healers in Brazil, which contains large quantities of the compound.

Birgit Kraft, who studies the therapeutic effects of marijuana at the Medical University of Vienna, says selective CB2 agonists are keenly sought after by clinicians, as they may be candidates for treatment of rheumatoid arthritis, as well as bowel disease.