New antibodies against HIV that could point the way to an effective vaccine against the virus have been identified by a group of scientists at the US National Institute of Allergy and Infectious Diseases in Bethesda, MD. These cross-reactive broadly neutralising antibodies bound to and neutralised more than 90 per cent of the HIV strains they were tested against.

’We had recognised over the past couple of years that some HIV infected individuals make very potent and cross-reactive antibodies to the virus,’ explains John Mascola from the NIAID team. ’We wanted to understand exactly what those antibodies were, and which parts of the virus they target.’

First, they had to isolate the B-cells that make these antibodies, but this was a challenge, he says, because their concentration in the patients’ circulation is quite low. ’We designed probes that very specifically exposed the part of the virus that binds to its receptor. This allowed us to pick out very HIV-specific B-cells that make antibodies for this region, and then we could molecularly recover the antibody from the B-cells.’ This was done using a single-cell polymerase chain reaction (PCR)-based amplification technique.

Antibodies that can neutralise a large majority of viruses teach us about vulnerable regions in the virus, Mascola says. And the scientists have managed to learn more than they had originally hoped as they have determined the crystal structure of one of these antibodies while it is complexed to the HIV envelope protein.

’The next step is to take this structural knowledge of the antibody and find a vaccine that elicits this type of antibody in a vaccinated volunteer,’ he explains. ’The scientific challenge is - and has been for some years - designing a vaccine that generates these kinds of potent antibodies. We haven’t been able to do that very successfully in the past, but we think that now we have examples of the types of antibodies that we want to elicit, and know how they bind, we have a framework for designing a better vaccine.’ 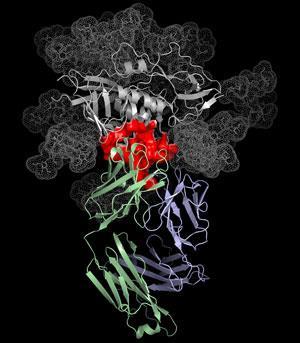 The problem with finding a vaccine against HIV is the virus mutates very rapidly, but these antibodies bind to a part of the envelope protein that is conserved as it is required to infect cells.

’This work is important because it establishes the proof of concept that the virus has vulnerabilities,’ says David Montefiori, director of the laboratory for Aids vaccine R&D at Duke University, US. ’Neutralising antibodies are associated with the success of vaccines for other diseases, and there’s been a lot of interest in them for HIV. We know from our studies in monkeys with SIV that if neutralising antibodies are present, the monkeys can be protected. I was losing my optimism, but now there is cautious optimism in the field that we are going to be able to solve this problem sooner rather than later.’