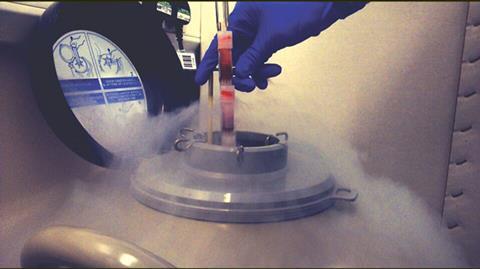 New cryoprotectants are needed to improve cell, tissue and organ availability for the worldâ€™s growing and ageing population

Researchers have synthesised a polymer that limits ice crystal growth in frozen red blood cells as they thaw. The polymer is set to pave the way for similar synthetic structures that mimic the properties of natural antifreeze proteins.

Antifreeze proteins have been a hot topic since they were first discovered in Antarctic fish in the 1960s. They have a wide range of potential applications in aerospace, the food industry and in biomedicine, where they are used in cryopreservation.

During cryopreservation, cells and tissues are stored at sub-zero temperatures and thawed before use. However, frozen cells can be damaged as they defrost. When ice melts, it can refreeze into larger crystals that puncture cells from the outside. This process, called recrystallisation, is especially damaging for organs and blood bags, which defrost over a long time.

‘If you directly freeze cells they don’t survive due to ice-induced damage, and the traditional solution is to add antifreeze solvents [such as glycerol or dimethylsulfoxide (DMSO)]. Although these work, they involve complex preparation procedures, and transfusing large volumes of solvent is not desirable,’ explains Matthew Gibson, whose team at the University of Warwick, UK, synthesised the new antifreeze polymer.

Robert Ben, who specialises in ice recrystallisation inhibiting cryoprotectants at the University of Ottawa, Canada, comments that ‘alternatives to the conventional cryoprotectants are urgently required as the fields of regenerative medicine and tissue engineering continue to advance’.

Unlike proteins, which need to be extracted or expressed in microorganisms, polymers are more accessible, processable, tunable and cheaper. Gibson’s group modified an already available polymer called a polyampholyte, which is composed of monomers with both positively and negatively charged groups. The polymer functions outside the cells, so it can be washed-off after thawing. This may explain its good compatibility with red blood cells. Up to 60% red blood cell recovery after freezing was observed during slow thawing when the new polymer was used, and this increased to 80% when the cells were thawed quickly. Notably, the polymer was capable of inhibiting ice recrystallisation by 50%.

Gibson admits that the mechanism by which the synthesised polymer inhibits ice recrystallisation is still not clear. Although it has been assumed for many years that macromolecules had to bind directly to ice crystal faces to inhibit growth, their work supports the idea that binding to ice crystals is not essential. ‘It seems that they somehow disrupt the rate exchange of water molecules between ice crystals, via the quasi liquid layer, although we do not have direct evidence for this at the moment. As to why the ampholyte structure works, we are not sure, but we are thinking that it might be a semi-rigid polymer due to charged interactions along the backbone, which helps.’

‘Cheap, non-toxic, degradable polymers that inhibit ice recrystallisation may become attractive non-permeating additives for cryopreservation of red blood cells if these boost cell recovery by more than 80% and allow for prolonged post-thaw storage. Such polymers have not yet been licensed or introduced into clinical practice,’ states Ilja Voets, whose group at the Eindhoven University of Technology, Netherlands, is also interested in engineering synthetic polymers with anti-freeze properties.

The results support earlier findings that ice recrystallisation inhibition is a desirable property for cryopreservation enhancement, rather than the polymer acting directly on the cell. More importantly, Gibson thinks that their findings ‘highlight the need for new technologies to address the challenges of an ageing population – for regenerative medicines (eg those based on stem cells) to be exploited, we need to enable the banking, and distribution of the new tissues, which we feel our materials can contribute to.’ He believes that ‘ice recrystallisation inhibition could be ‘dialed in’ to a range of molecules and polymers if we can understand how they function. It goes without saying that we are very excited about the future of these materials.'

Matthew Gibson won the Royal Society of Chemistry's Emerging Technologies competition in 2014 with this research.