Are nanotubes the future for radiotherapy?

Sealed up carbon nanotubes containing radioactive salts could be the ultimate in targeted radiotherapy, say researchers

Sealed up carbon nanotubes with radioactive salts inside could provide the ultimate in targeted radiotherapy or medical imaging, say chemists from the UK and Spain. The tubes can be gathered in mouse lungs using carbohydrate tags attached to the outside, and with more specific tags, could be directed to tumour cells.

Speaking at the American Chemical Society national meeting in Boston, US, Ben Davis from the University of Oxford, UK, explained that current methods of radiotherapy using ’gamma knives’ involve multiple beams of gamma rays focused on the tumour. ’But of course all those beams go through the surrounding tissue,’ says Davis. ’If you want to kill cells with radiation, what you want to do is just drop the radiation in there - it’s a drug delivery problem where the drug is radiation.’

The team worked with Malcolm Green, also at Oxford, who recently developed methods for filling and sealing up single walled carbon nanotubes; and with Kostas Kostarelos at the School of Pharmacy, University of London, UK to investigate the tubes’ medical applications. Under normal circumstances, sealed nanotubes would be useless for drug delivery as the encapsulated material cannot be easily released. However, Davis explains that the tubes provide an ideal vessel for radioactive sodium iodide: ’What we’re delivering is photons - gamma rays - which can get out.’ 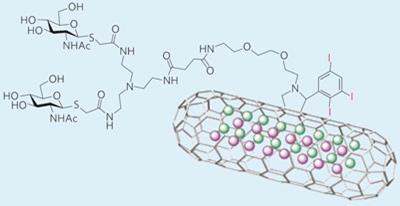 The next stage is to get the tubes to the right place. This is done by chemically modifying the surface of the tubes with a sugar or other targeting molecule. The sugar plays a variety of roles, Davis adds, making the nanotubes soluble and stopping them from clumping together as well as providing a site for proteins to recognise.

Using N-acetylglucosamine as the tag, the team found that tubes injected into mice accumulated exclusively in the lungs, whereas free sodium iodide normally ends up in the thyroid, liver and bladder.

’A lot of people have ideas about targeted delivery of polymers or nanoparticles,’ comments Daniel Ratner from the University of Washington in Seattle, US. ’But Davis has actually shown, in vivo, what appears to be remarkable specificity for the lungs. Seeing that level of carbohydrate-based tissue specificity is really exciting.’

Ratner adds that the sugar could be exchanged for a whole range of targeting molecules like antibodies, synthetic molecules or other carbohydrates to target other tissues. Davis agrees, saying that what is missing is comprehensive study of which sugars interact specifically with particular cells or proteins. ’No-one really has a map of the body,’ he says.

Davis also points out that the tubes don’t appear to cause toxicological issues in the mice. ’We don’t see any radiation leakage or evidence of metabolism of the tubes,’ he says, ’what we see is clearance - they go to the liver and spleen and just pop out in a relatively stable way.’ He proposes that this might be because the tubes are quite short and have sealed ends, whereas much of the cell damage associated with nanotubes comes from the open ends acting as nanoscale needles to puncture cell membranes.