Introducing asplatin, a fusion of cisplatin and aspirin

Cisplatin, along with other chemotherapeutic drugs, is used to treat various types of cancer, including testicular, ovarian, lung and bladder cancer. However, clinical use of cisplatin is limited by developing resistance, earning it the nickname the ‘penicillin of cancer’. Resistance mechanisms to cisplatin are well defined, but there are still no treatments available to surmount or reverse it.

Now, Yangzhong Liu and colleagues at the University of Science and Technology of China have made and tested a cancer fighting molecule that seems to evade cisplatin’s resistance problems. Asplatin is a fusion of cisplatin and aspirin and is generated from a nucleophilic substitution reaction between oxoplatin and acetylsalicylic anhydride. The reaction is simple and the raw materials are relatively cheap.

The team tested the drug on human breast, lung and cervical cancer cells, cisplatin resistant cancer cells as well as mouse models. ‘Asplatin exhibits significant cytotoxicity to cancer cells and is up to 10 times more effective than cisplatin. In addition, asplatin almost fully overcomes the drug resistance of cisplatin resistant cells,’ says Liu. Upon cellular uptake, asplatin can be reduced by ascorbic acid, which is present in higher concentration in cytoplasm than in extracellular environments. Reducing asplatin activates this prodrug and generates cisplatin and aspirin in cells. 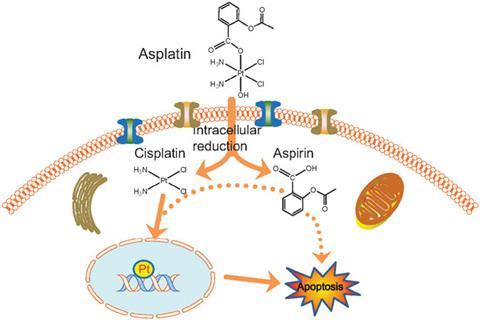 Upon cellular uptake, asplatin is reduced by ascorbic acid to give cisplatin and aspirin

It is generally accepted that cisplatin resistance can arise from different cellular adaptations including reduced drug uptake, drug deactiviation, DNA damage tolerance and increased DNA damage repair. Aspirin ligation to cisplatin alters the cellular uptake pathways of both platinum and aspirin. Liu’s results indicate that cellular uptake and accumulation of asplatin is considerably higher than that of cisplatin, and more DNA platination was observed with asplatin than cisplatin – possible explanations for how asplatin manages to sidestep resistance issues. Another theory is that the simultaneous release of cisplatin and aspirin changes the cell’s response to cisplatin induced DNA damage. Liu’s team is already conducting further studies to understand how aspirin released from asplatin can regulate the cellular response to the platinum drug.

‘This works demonstrates the advantages of using platinum(IV) prodrugs with bioactive axial ligands – aspirin in this case – to enhance the in vivo efficacy of cisplatin. It should be pursued with proper drug delivery systems and could lead to further breakthroughs in the treatment of cancer,’ says Dan Gibson, a medicinal and bioinorganic chemist at the Hebrew University of Jerusalem in Israel.

Zhe-Sheng Chen, whose research at St John’s University in New York, US, is also looking for therapeutics that can conquer cancer drug resistance, says the experiments are robust and the findings are significant. However, he adds that further works is needed to confirm if asplatin works on other cisplatin-resistant cell lines as Liu’s team only tested one.