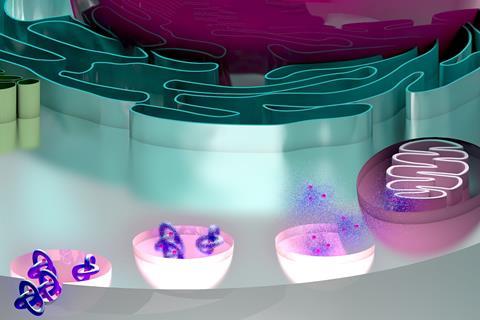 Researchers in the United Arab Emirates and the US have shown that metal–organic trefoil knots, a type of mechanically interlocked architecture, could form the basis of a new class of anti-cancer agents.

Platinum (iv)-based drugs, such as cisplatin and carboplatin, are front-line treatments for several cancers. However, cancer cell resistance and patient side-effects mean investigations are ongoing into alternative drugs that contain other metals.

Now, Ali Trabolsi of New York University Abu Dhabi and his team have devised a series of unusual complexes that could provide a new therapeutic avenue for treating cancer. The complexes, which combine zinc, cadmium, copper or manganese with organic ligands in a trefoil knot shape, are more potent than cisplatin towards six different cancer cell lines known for being aggressive with a risk of high drug resistance. Further studies show that both healthy cells and zebrafish embryos can tolerate the trefoil knots.

(a) General chemical structure of the metal–organic knots and x-ray crystal structures of the (b) copper, (c) zinc and (d) cadmium knots

The knots are more selective for cancer cells than cisplatin. Their size favours uptake mechanisms that are more active in cancer cells and they also contain dynamic covalent bonds, which break and release their sub-components in the acidic environment found around cancer cells.

Cisplatin is thought to fight cancer by damaging DNA in a way that prevents cell division – something that enzymes in healthy cells can repair. Mechanistic studies show that Trabolsi’s knots kills cancerous cells by generating reactive oxygen species that damage mitochondria, rather than disrupting cell membranes or causing DNA damage.

Together, the knots’ superior selectivity and pharmacological mechanism could mean they have fewer side-effects than cisplatin and its derivatives.

‘The metal-organic trefoil knots appear to have a different mechanism than cisplatin, and the observation that they undergo hydrolysis at a more acidic, cancer relevant pH is particularly exciting,’ comments Patrick McGowan, who develops organometallic anticancer drugs at the University of Leeds, UK.

James Crowley, a chemist working on metallosupramolecular structures at the University of Otago in New Zealand, says these molecules could provide a new unexplored area of chemical space for drug design and development. ‘This work will get more people thinking about the biological properties of interlocked systems.’