Australia’s carbon tax has finally received approval from the country’s Senate after years of bitter political wrangling. The Australian prime minister Julia Gillard called it one of the most important environmental and economic reforms in Australia’s history. However, the opposition leader has promised to repeal the law if his party wins the next election, due in 2013.

From 1 July 2012, the country’s top 500 polluters will have to pay a tax on their carbon emissions of AU$23 (?15) for each tonne of carbon dioxide emitted. This will change to a flexible price after three years when a market-based trading scheme kicks in.

The scheme aims to cut emissions by at least 5 per cent of 2000 levels - 159 million tonnes - by 2020. Australia produces about 500 million tonnes of carbon dioxide each year, accounting for 1.5 per cent of the world’s emissions and making it one of the top 20 world polluters. However, it is the developed world’s highest CO2 producer per head thanks to its relatively small population. Aside from the European Union, only New Zealand currently imposes a levy on CO2 production.

Companies generating over 25,000t of CO2 each year will be liable for the tax. Agriculture, land management and forestry are exempt. 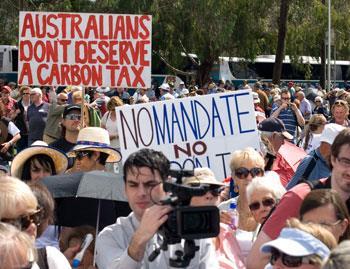 Feelings ran high in the debate over Australia’s carbon tax

Of the 500 liable businesses, the government estimates that around 100 are involved in coal or other mining, 60 in electricity generation, 60 in industrial processes (cement, chemicals and metal processing), 40 in natural gas retailing, 50 in a range of other fossil-fuel intensive sectors and the remaining 190 in the waste disposal sector.

The government says it will allocate around 40 per cent of the proceeds of the tax to help businesses. The Jobs and Competitiveness Program will provide A$9.2 billion over the first three years of the scheme. There will also be A$500 million for steel manufacturers, food processors and metal foundries and forgers; an A$800 million grants program for low pollution technologies; and A$1.3 billion for the coal sector.

Business groups believe the Gillard plan will erode Australia’s prosperity. Margaret Donnan, chief executive of the Australian Plastics and Chemicals Industries Association, said: ’We particularly fear for the future of those companies who will not receive ongoing assistance [through compensation schemes] such as our plastic product manufacturers, who are already faced with significant challenges including the high Australian dollar.’

The Senate vote is a victory for Gillard, who had given strong backing to the plan. The bill scraped through with 36 votes in favour, 32 against. This followed an even tighter vote in the lower house in October. While environmentalists have broadly backed the scheme, there has been vociferous opposition elsewhere.

’This new tax is a blow to the future of Australian manufacturing and a new burden for families,’ the Conservative party opposition leader Tony Abbott said. ’At the next election, I will seek a mandate from the Australian people to repeal this tax.’