US researchers have genetically modified bacteria to eat carbon dioxide and produce isobutyraldehyde - a precursor to several useful chemicals, including isobutanol, which has great potential as a fuel alternative to petrol.

The modified bacteria are highly efficient and powered by sunlight, so a future goal is to set up colonies near to industrial plants. This would allow greenhouse gases to be recycled into useful chemical feedstock - supplying several hydrocarbons that are typically obtained from petroleum. 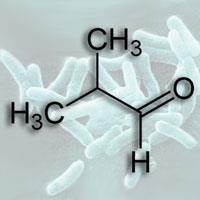 Cyanobacteria and microalgae that consume CO2 have been identified for a long time, but none produce any liquid molecules that can easily be used as fuel. In the past, attempts have been made to engineer these organisms to produce hydrogen or ethanol, but making the process efficient is a challenge.

’Here, we were successful in engineering CO2-eating bacteria to produce isobutyraldehyde very efficiently,’ says James Liao, who led the work at the University of California, Los Angeles, US. ’Our process is around 10 times faster than hydrogen production and about 100 times faster than genetically engineered ethanol production.’

Liao’s team modified the genome of the cyanobacteria Synechococcus elongatus by incorporating four genes from other bacteria into the structure. These genes, which come from L. lactis, B. subtilis and E. coli, produce enzymes that hijack the metabolism of the microbes - turning them into miniature reaction vessels.

The synthetic pathway begins with the photosynthetic conversion of CO2 to pyruvic acid by the bacteria. Next, the reaction continues in the bacteria as the added genes trigger three further steps to make isobutyraldehyde.

Importantly, extracting the final product from the mix is a simple process. ’The fuel vaporises to the gas phase easily, making separation extremely simple. Afterwards, we can liquefy it again by simple condensation,’ Liao told Chemistry World.

This process helps keep the bacteria alive longer, as they are not exposed to large amounts of chemicals. ’The bacteria are very stable, and in our flasks without much environmental control, the bacteria continued to produce for about 10 days,’ Liao says.

But there are still much work to be done before the process can be commercialised, Liao notes, particular with scaling up the process.